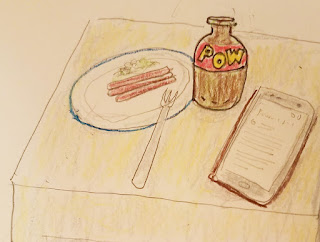 The last flight of steps down from my top floor apartment would normally scare me. The wooden slats bounce underfoot and seem to be suspended in midair.There is no railing. However,I bounce down happily enough into a large atrium restaurant.
I have been told they have 8 ounce bottles of beer here that are really powerful. I order one, and a plate of small sausages. I take my seat at a table in the middle of the space, where a server brings me my order. I have been typing my dreams on my phone, as is my custom. There were many active scenes, and I am glad I managed to catch them.
The beer and sausages are delicious, though each was barely a nip. I think I'll repeat my order. At this moment, I realize I did not write my dreams where I will be able to find them when I go back to my bed. I am now quite lucid. I realize that I came out of some inner dream experience into this outer court - appropriately, it's rather like a food court - and that if I want to save anything before the bouncy steps and the punchy little bottle of beer, I had better get on it.
I sit up in bed and grab my phone, postponing my bathroom visit. While typing a report in bed, I am still at the table in the dream restaurant. Carefully, I retrace my steps, up the bouncy ones, and then up regular stone or cement staircases to the apartment.
What was I doing in this apartment, unknown to me in the ordinary world? The last thing I did before leaving was to arrange three divination decks - one at least was a tarot deck - I had designed and drawn atop a waist-high bookcase. I reached through a gauzy curtain to pull down a tall window behind the bookcase in case of rain
I remember vaguely doing test readings with my cards with other people,and exploring the city beyond this building. But for now,I am content to go forward with the story that will bring me to the 8 ounce bottle. I open the door of the apartment.It is dark on the landing. I hear a neighbor moving about. "I'm new here," I call. "Do you know where the light is?" She laughs. She doesn't.
I go back down the stairs. They are well lit by the time I get down to the bouncy steps. I recall I was going t get something to eat at a restaurant outside this complex, but was diverted by the 8 ounce beers.
Now I recall a little of the city I started exploring in earlier scenes. The streets are full of amazingly decayed and ruined houses. Their pictures would make a marvelous book. Clearly a general disaster overtook the city - war or plague or inundation- yet each house has been ruined in its own way, and carries its own story. Formerly elegant townhouses are solitary islands among the rubble of buildings that fell around them. A once grand palazzo wears the face of a ruined duchess. I will come here again. But first I must finish this report.

The so-called false awakening is a common phenomenon. For many prolific dreamers, it involves the experience of writing something in your journal (or in my case on the phone) only to wake up to find that you were still dreaming when you did that. I would not call my experience from the early hours today a false awakening. Rather, it is as example of serial awakening.
In a dream I become aware that I was dreaming when I recorded a dream report. I am now able to sustain awareness in both realities, typing my report with my physical fingers while still in the dream restaurant with my beer and sausages. At the same time, I am able to project myself back into earlier scenes in the dream sequence: to laying out the card decks and exploring the ruined city. I am missing a great deal, but I have leads for reentry expeditions..
I am tickled by the lucidity trigger. The notion of "powerful" 8 ounce bottles of beer was insistent. It came into my mind repeatedly, when I entered the dream restaurant and when I realized I was dreaming. Something to seize and hold. Reality check: I am unlikely to order a half pint of beer in any container. I see that 8 oz cans are available, both of suds I would never touch (like American Budweiser) and of some high-octane craft brews that do pack a punch,with 7 to 10 per cent alcohol content as opposed to the 5 percent average for American beers.
Perhaps the symbolism of the little bottle is telling me that less may be more and that small portions may be potent. Certainly I enjoyed bringing back small portions of a very active night when my dream self was out and about in many places, and the prompt to float the expression serial awakening. I may need to eat some sausages soon to honor the dream. Their taste is still on my palate: slightly spicy, like merguez.  And no doubt there is beer in my future.