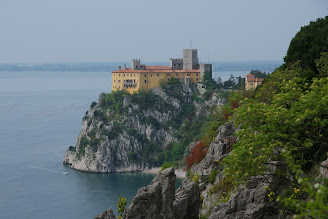 He hears the voice in a howling wind on a cliff path above the Adriatic, and it gives him the first line of what becomes the Duino Elegies.
Wer, wenn ich schriee, hörte mich denn aus der Engel Ordnungen?

Who, among the orders of angels, would hear me if I cried out?

He warns at the end of the first verse that “every angel is terrifying”. He picks up that refrain at the start of the second elegy, where he calls the angels “almost deadly birds of the soul”.  He gives a longing glance at the gentler appearance of the angel in the apocryphal Book of Tobit, as a gentle, very human guide who escorted the boy Tobias along the road

Where are the days of Tobias,
when one of your most radiant stood at that simple doorway,
dressed for travel and no longer frightening…?” [1]

The author is Rainer Maria Rilke, who was born in Prague and is recognized as one of the greatest poets in the German language. His imagination was angel-struck, from his early poem about the angel of the sundial at Chartres to his ghost writing for the Angel of Death in the last lines he ever wrote. His angels rarely have much in common with the familiar figures of Jewish and Christian angelology. He told  Witold Hulewicz, his Polish translator, that he was more drawn to the angels of Islam. [2]

Before he arrived at Duino Castle, near Trieste, in 1912 as the guest of the Princess Maria von Thurn und Taxis, Rilke had wandered Andalusia with a Koran and a copy of a French biography of Muhammad in his book bag  He wrote a poem about Muhammad’s summoning.

The 96th sura of the Quran (“Recitation”) corresponds to the night of January 12, 611, when Gabriel first appeared to Muhammad – who was sleeping in a cave in Hira -and ordered him to read. In the hadith Muhammad is roused by a blinding light. When his eyes adjust he is terrified by a radiant figure that spans the whole distance between heaven and earth. The angel lifts him by his hair (he feels no pain) and speaks to him in a voice that fills him with fear. In the name of the creator, the angel hands him a scroll and orders him to read. Muhammad protests that he cannot read.In some versions,the contents of the book enter his heart and three years later, on the orders of the angel, he starts to deliver them to others.

When Muhammad reads, in Rilke’s elaboration,the angel submits.and bows to him.

The Angel bowed its head
before him, one from thenceforth who had read:
who knew, and carried out, and who decreed. [3]

From the birth of the Duino Elegies in the storm above the Adriatic, it took Rilke ten years to complete all ten, after the trauma of the Great War, in what he called a thunderstorm of the mind. Often, in these lovely, wild and mysterious verses,we fell the aching distance between the human condition and the untouchable beauty of the angelic realm. In a letter to his Polish translator Rilke explained that "the angel of the Elegies is that being that vouches for [our] being able to recognize a higher level of reality in [the realm of the] invisible than in the visible.”

“You are the bird whose wings came/when I wakened in the night and called.”  This is how Rilke addressed the Guardian Angel (Der Schutzengel) in a poem with that title.

What shall I call you? Look, my lips are lame.
You are the beginning that gushes forth,
I am the slow and fearful Amen
that timidly concludes your beauty.
You have often snatched me out of dark rest
when sleep seemed like a grave to me
and like getting lost and fleeing, -
then you raised me out of heart-darknesses
and tried to hoist me onto all towers
like scarlet flags and bunting.[4]

In the last lines Rilke composed, in the unfinished poem that begins Komm du, du letzter ("Come on you, you last") the poet gives voice to an angel. This time it is Azrael, the Angel of Death.

As I burned in spirit, I burn in you.
The wood that blazes held back for so long has aged;
now I feed it and burn in you. [5]

Rilke gave us a gentler version of human-angelic interaction in one of the many poems he composed in French.

Stay still, if the Angel
suddenly chooses your table;
gently smooth those few wrinkles
in the cloth beneath your bread.

The hint that an everyday angel may sit down at our table brings shivers of recognition and hope. In these lockdown times, it's good to know we may have visitors who don't need to enter by the door or come masked. Also helpful to have guidance on the correct table manners to observe when the angel calls.

1. Rilke, Duino Elegies II trans. Stephen Mitchell
2. 1925 letter to Witold Hulewicz quoted in Karen J. Campbell, “Rilke's Duino Angels and the Angels of Islam” Alif: Journal of Comparative Poetics No. 23, Literature and the Sacred (2003) 191-211.
3.  Rilke, "Muhammad's Summoning", translated by Leonard Cottrell. https://dailypoetry.me/rilke/mohammeds-summoning/
4. Rilke, "The Guardian Angel" in  in The Book of Images translated by Edward Snow.
5. Adapted from an unsigned translation of “Komm du” published in the Times Literary Supplement in December 1975 accompanying an essay on Rilke by Walter Kaufmann, who is presumed to be the translator.
6. from "Vergers" (Orchards) trans. A. Poulin, Jr,, in Rilke, The Complete French Poems.

Image: Duino Castle,near Trieste, where Rilke composed the first of his Duino Elegies in 1912.