Where we go in dreams, as in life, has a great deal to do with our desires, our calling and our curiosity. In this time of pandemic, I am spending more time than ever in orgies of reading in the middle of the night, jumping from one partner to another; last night from Wendy Doniger O'Flaherty's study of what we learn from Other People's Myths to Jeffrey Kripal's book on Authors of the Impossible to a biography of Victor Hugo.
I turned in a round 4:00 a.m., curious to see what might be waiting for my in the twilight state of hypnagogia. I set no agenda. I simply lay on my back, in horizontal meditation, ready to allow images to rise and fall. Here's what I recorded in my journal:

My inner screen is blank. No, that’s not quite true. It is illuminated by a dim light. It is the color of old parchment, quite flat, until a small grey shape appears near the top, It flutters and falls back, stirs a little, rises into the shape of a wing. A butterfly wing, drawn in pencil or with a fine brush. I think of Zhuang Zhou’s butterfly and of how it is depicted in paintings of the sage dreaming the butterfly or the butterfly dreaming the man. 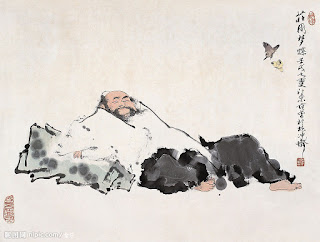 Count your breaths, I tell myself. Just watch what rises and falls. Notice when you lose count.
The shape stirs again. Beyond it, still only a silhouette, I see a great bird with spread wings.
There is the irruption of color. A blonde woman’s large rosy face and blue eyes, peering into mine. Who is she? She is gone before I can identify her.
I picture myself landing at a European airport, riding to the hotel, wearing a face mask as I check in. This is fairly vivid, but seems like a set of updated memories. It lacks the spontaneity of the butterfly trying to take wing from the brush, or the blonde peeper
Fifty breaths. I have already stumbled in my count a couple of times, switching from inbreath to outbreath. I have the impression of lots of shadow play, of figures and images flitting by too quickly for me to make an inventory. No big visitation tonight, it seems. No repeat of what unfolded around this time, in this room, ten days ago:


She took form as soon as I lay down and closed my eyes: a tall, statuesque female figure wearing a long shimmering blue robe with a golden nimbus about her head.. She held a long golden staff that rises to head height. It was capped by a pair of birds, possibly doves, that came alive in a glory of fluttering wings.
I thought of Brigid, and Mary, but did not need to settle on any single name. The Lady’s  face became a golden disc. It shone as bright as any sun except that I could contemplate it without turning away.
I knew this was an epiphany and felt blessed.

However, I don't think this is the lady who looked in on me just now. Well,the body deserves some industrial rest.
I roll on my left side ready for sleep.
My inner screen lights up.
I see letters and numerals in a broken column, printed on the left side of a page or screen. They look like academic citations, with many abbreviations. References to learned journals and books published by Brill in Leiden.
There is an Arabic word, helpfully transliterated. Al-ruya. The true dream. And something in the non-Roman characters of another language. Amharic? Maybe this:

hlm, pronounced ḥilimi. Amharic for "dream". (I looked it up later.)
With this, I have the vision of an elderly king. Dark-skinned, bearded, gaunt, with voluminous robes, a scepter and a high boxy crown. His vestments and his crown seem too big for him, or maybe he has shrunk since her first put them on. He reminds me of photos of Haile Selassie,the last emperor of Ethiopia..
An inner voice tells me
The king appears when you are able to step back into the dream

Later, in a sleep dream, I found myself as participant and observer in an exciting thriller plot. The action started to unfold on a pleasant urban street that may have been in Little Venice in London. The dream was so vividly real that I nearly failed to record it on waking. It felt just-so; been there, done that.

On the other hand, my more bookish adventures in hypnagogia have set me research assignments. Why Haile Selassie?  How are dreams approached in Ethiopian culture and how are they represented in Amharic literature? Can I follow that list of citations? What more do I need to learn about رؤيا , the true dream, in Islamic tradition?