Traveling without leaving home, with dictionary 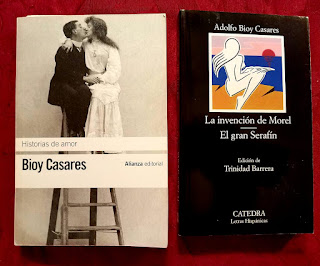 Reading, like dreaming, is a way of traveling without leaving home. The sense of being far away may be enhanced by reading in a foreign language. Prior to the pandemic, I made it my practice to read fiction in French or Spanish every month or two to scrape the rust off my humble acquaintance with those languages. I read fast, hoping that I would get the meaning of words unfamiliar to me from the context – as you might when riding the Paris Metro or hanging out at a Barcelona tapas bar – and that they would then stick to me by osmosis.
My reading style is different now. I am enjoying reading slowly, sifting possible meanings for an arcane term or a burst of patois. I am currently sipping and nibbling my way through Historias de amor, a collection of petite beauties by Adolfo Bioy Casares, my favorite Argentine writer after his close friend and occasional collaborator Jorge Luis Borges.
I purchased my copy of this book on the Passeig de Gracià in Barcelona before air travel became a memory of a bygone era. I opened it at random and found myself in the midst of a story titled La obra (“The Work”) listening to the voice of a novelist who oscillates between complete idleness and the terror that he may fail to produce the new work he knows to be the price of immortality. He goes to a beach resort out of season, hoping to write without the distractions of the capital.  He arrives at his cottage “when the last troops of summer people have gone to their redoubts and the afternoons are most beautiful.” He hopes that logs crackling in the hearth and the sea view through his window will give free rein (rienda suelta) to his imagination. He declares, “I am not seeking adventures but favorable conditions for work.”
With the narrator, we make inventory of every detail of his daily round. When he goes to the grocery store, we are with him as the shopkeeper requires his shy lady customers to call out, one item at a time, what they have come for. When our writer comes upon a beach spa, deserted except for Balmante, its piratical, pipe-smoking owner, we see (and count) the portholes (ojos de buey), the ropes, the canvas, the wicker chairs (sillas de mimbre). I don’t find this wearisome at all, even as I reach for the dictionary. The enunciation of precise details of one scene after another builds a kind of enchantment.
I see the truth of Bioy's observation elsewhere that "the most intimate charm of an adventure comes to us through giving voice to the everyday circumstances that surround it." (El más íntimo encanto de la aventura nos llega por la enunciación de las circunstancias domésticas que le rodean).
In “La obra”, we are not on our way to a wildly fantastic event, or even an act of lovemaking, which are often central to Bioy’s plots (tramas). The climactic event is tragic but strangely remote: a fire at a service station that claims the body of the narrator’s beautiful young landlady. They took tea together every afternoon;he admired her and once made her blush. Yet he does not rush over to the scene. He watches from a distance, on a neighbor’s balcony. He joins the townsfolk who have been up all night as they pig out on a whole lechón  (suckling pig) at the market at a crazy hour. A stranger rushes into this surreal scene to report that the son of Balmante, the spa owner, was seen escaping the burning building through a window. We learn a savage story, but only in gusts of hearsay. The son of Balmante attempted to violate the beautiful lady, killed her when she resisted and tried to cover things up by setting the fire. The narrator dreams of her, calcified and in the flesh.
Later in the day we learn that the son of Balmante went out on a boat and has been lost in a wild sea. On the last page the narrator and Balmante smoke their pipes and drink rum together, contemplating the moods of the ocean. Their own emotions are contained. There is a beautiful last reference to la obra as Balmante gestures towards the shifting sands.
Making frequent dictionary stops, my progress through “La obra” was as slow as “the interminable railroad adventures” the narrator mentions as he rides his slow train to Mar de Plata. The narrative is admirably clear and crisp, with that patrician air of detachment and bone-dry humor characteristic of Bioy. However, there are many words and expressions that were unfamiliar to me and I did not want to miss any of them. Now I know the Spanish word for tripe (mondongo), something I hope never to eat. I know I want to avoid becoming a baked pigeon (pichón al horno) and that I must find a way to avoid slumping into holgazanería, that state of idling and procrastination that is not unknown to writers.