When the body refuses the soul’s assignment 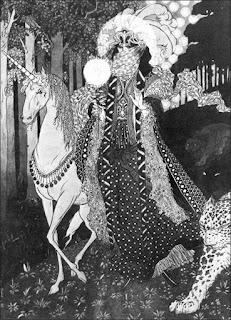 Edward Plunkett, known in society and to his vast reading audience as Lord Dunsany, was one of the masters of fantasy, producing more than sixty books in his lifetime at high speed, his publishers generally content to print the first drafts that he sent them exactly as they came in. He was an Anglo-Irish gentleman of the old school, a hunter, the chess and pistol-shooting champion of Ireland.  But while he rode his fields, his mind was forever beyond the fields we know, in Elfland or in a Carcassonne of the imaginal realm, where a witch queen, terrible in her beauty

Swims in a marble bath through whose deeps a rive tumbles, or lies all morning on the edge of it to dry slowly in the sun, and watches the heaving river trouble the deeps of the bath. It flows through the caverns of earth for further than she knows and coming to light in the witch’s bath goes down through the earth again to its own peculiar sea….
When there is blood in the bath she knows there is war in the mountains.

Somewhere between here and Elfland, Lord Dunsany came by an unhappy body engaged in a painful dialogue with its soul. “The Unhappy Body” (his title for the tale) is tired; all it wants is to sleep. The soul will not allow it to rest because it has an urgent assignment for this body. Everywhere, the soul explains,

People’s dreams are wandering afield, they pass the seas and mountains of faery, threading the intricate passes led by their souls; they come to golden temples a-ring with a thousand bells; they pass up steep streets lit by paper lanterns, where the doors are green and small; they know their way to witches’ chambers and castles of enchantment; they know the spell that brings them to the causeway along the ivory mountains – on one side looking downward they behold the fields of their youth and on the other lie the radiant plains of the future.

But people forget their dreams. From their dream awakenings, they go back to sleep, forgetting the realms of magic and enchantment, and the causeway from which they can see into past and future. The soul’s urgent assignment for the body is: “Arise and write down what the people dream.”
The body asks what reward it will receive for doing this. When told there is no reward, the body declares, “Then I shall sleep.”
But the soul rouses the body with a song, and wearily the body takes up a pen and starts recording what the soul wants it to preserve: a vision of dreamers rising above the roar and distraction of the city to a shimmering mountain where they board the “galleons of dreams” and sail through the skies in their chosen directions. The soul goes on telling the dreams of all these travelers. But the body is tired and mutinous; it cries out for sleep.
“You shall have centuries of sleep,” the soul tells it, “but you must not sleep, for I have seen deep meadows with purple flowers flaming tall and strange above the brilliant grass, and herds of pure while unicorns…I will sing that song to you, and you shall write it down.”
The body protests, Give me one night’s rest.
Go on and rest, the soul at last responds, in disgust. “I am tired of you. I am off.”
The soul flies away. The undertakers come and lay the body in the earth. The wraiths of the dead come at midnight to congratulate the body on its happy estate. “Now I can rest,” says the body. 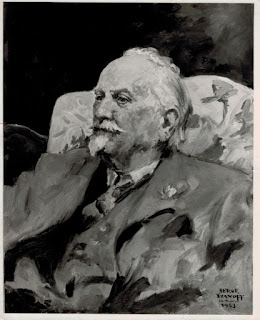 Ursula LeGuin once said that Lord Dunsany is the worst temptation for the novice writer of fantasy, and it must be conceded that his prose can be overly rich and faery-infused. Yet A Dreamer’s Tales, where you will find "The Unhappy Body", is a book for the ages, and reminds us that in fantasy we can sometimes the truth of our condition more clearly than in the roar of the city.