We are such dreams as stuff is made on 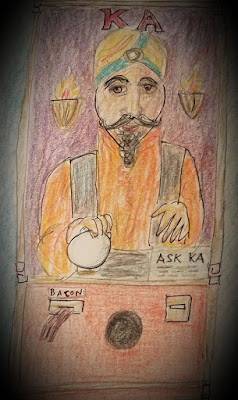 The concourse is longer than I remember, with more turnings and more choices. Maybe I turned the wrong way when I last had the choice. Walls and ceiling are covered with little white ceramic squares, like tiles in a bathroom. Or a morgue. There are movie posters on the walls, but graphics and titles are indistinct under a changing wash of murky colors, shifting from bruised purple to poison green.
I slow to a stop, wondering whether I should turn back. In this moment, color drains from the scene. There is only black and white. Definition is sharper. Shadows are knife-edged. I can read a sign that says BARDO. It points forward and back. Underneath it, helpfully, is a second sign I know from roundabouts in France: TOUTES DIRECTIONS. I see that indeed I am at a kind of roundabout. Tunnels go off in all directions. As I spin to appraise my situation, I lose all sense of direction. I am not sure I can find my way back now. Which way should I take.
Ask Ka.
The statement is made in a precise and neutral voice, classless and accentless. I am not sure whether it comes from inside or outside my head. I don’t know what it means until something is illuminated in the tunnel ahead of me, as if caught by the flash of a camera. It looks like an old-time phone booth.
I walk towards it and more light comes on – a crescent of brightly colored bulbs on top of the booth, a warm syrupy light inside. The sign on the box, next to a slot for coins, reads ASK KA. Behind the glass is a round-bellied figure with curling mustaches and a turban. His eyes swivel to look at me. The illusion is remarkable. There is life – or lively death – in those eyes, and in the smile lines around them, and in the rise and fall of torso and belly.
I have seen figures like this at fun fairs and outside magic shops. The last time was on the subterranean level of Pike Place market in Seattle, when I popped a quarter in the slot and a fortune-telling dummy named Zoltar decanted a scroll that – as I recall – was on the money if rather generic.
I fish in my pocket for a quarter to see what Ka can deliver.
Your money is not currency here, says that neutral voice.
Ka is staring at me.
Think of something that makes you want to be in a body.
This is crazy stuff, but it gets pictures moving in my mind. Sex. Love. The kids. Swimming in the lake.
Ka’s tongue come out of his mouth and lolls over his chin whiskers, pink and plump and obscene. He points at his tongue and I hear the word
Bacon.
“Bacon?” This is insane. But Ka is nodding his head vigorously.
I look more closely at what I thought was a coin slot. It is actually designed to take something else.
“Get your tokens here,” says a voice behind me. I turn to find a vendor on a tricycle. The handlebar supports a platter of crispy bacon.
“How much?”
“Just one strip for now.”
“I mean, what is the charge?”
“You mean, what is your charge. You are charged with eating one strip of perfectly crispy bacon for Ka every day you are in the body.”
“But I don’t usually eat breakfast.”
“Bacon is not only about breakfast. It is a religion.”
“I’ll see what I can do.” I don’t want to miss the chance to ask Ka. I detach a strip of crisply bacon from its fellows, resisting the temptation to grab another for myself – I am suddenly ravenously hungry – and feed it into the slot on the front of the fortune teller’s booth.
I watch Ka’s white-gloved hands come down to collect the bacon. As he raises it to his mouth, a second pair of hands appears. He is sprouting limbs like a Hindu deity. With his extra hands, he smooths out a piece of paper, writes on it carefully, rolls it into a scroll and drops it into a chute. The scroll comes out the bottom, neatly tied with a thread.
I retrieve it. As I untie the thread, I glance at Ka. His jaws are definitely working. Some of his hands are now making mudras.
I open the fortune scroll and read the impeccable Copperplate:

We are such dreams as stuff is made on.