On leaving a dream 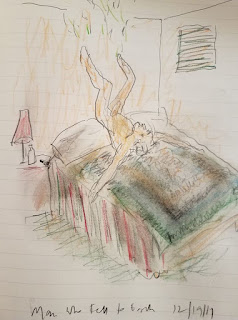 When I leave a dream, I often feel that I step from one room into another. It's a "just so" feeling. I was there, and now I am here.
When I exit a dream, I avoid saying "I woke up." That is such a boring way to end a dream narrative. And it's entirely possible that when I open my eyes in one reality, I have fallen asleep in another world that is no less real. When I finish recounting a dream adventure, I may say. "then I left that scene" or, “then I came back to my bedroom”.
Sometimes the dream stays with me, and I am in both locations - the bedroom and that other room - in a state of dual consciousness after I come back to my body.

Very early this morning, at an hour many would call the middle of the night, I came back to the body in my bed from an excursion. In my dream I was at an airport where a woman from an Islamic country needed my help to find a place where she could get halal camel meat.
This felt like an entirely literal experience, taking place in an alternate reality. I do not rule out the possibility that I will meet that woman at an airport in the future, since I often return from a dream with  memories of the future.
My ability to help her will be greater now that I have consulted Auntie Google about halal camel meat. I now understand that camel meat is not only halal ("allowed") for Muslims but is available in restaurants and butcher shops all over the Middle East and Central Asia. I will also reflect on the possible symbolism here. It may have something to do with taking on the strength to cross a desert while carrying your own water - quite relevant for a writer embarking on a new book project. A dream adventure can be literal, symbolic and an experience of another reality all at once.
My gentle return from my dream outing allowed me to see the airport - a very modern one, with sweeping architectural features I did not recognize, and the strong, dark features of the woman (no headscarf, I confirmed) - as I made a note.

Other times, however, I don't so much come back from a dream as fall out of it, in a mode reminiscent of the David Bowie character in The Man Who Fell to Earth. One night I fell back into my body so hard that I thought that I had broken the bed. I made a drawing of that bumpy return. Coming back so hard and fast cost me the memories of where I had just been.

Journal drawing: "Man Who Fell to Earth" by Robert Moss