The biography of a dream symbol 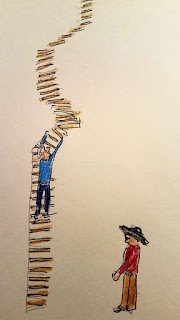 If you are keeping a dream journal, a great game to play from time to time is to track the evolution of a familiar symbol or theme.

You've been dreaming of the bear, or the fox, for years; how has your relationship changed? You often dream of running into construction on the road; are you getting through, taking a detour, grinding to a halt, or remembering you can fly? Again and again, you find yourself exploring a dream house that has more rooms or levels than your regular house; can you make a floor plan, marking its changes?

I made it a homeplay assignment for members of one of my active dream circles to come prepared to present the "biography" of a dream symbol.

A man in our group tracked his dream encounters with the bear starting with a scary brush with a giant grizzly many years before, in which some of the tension lifted when he was reminded that "all mammals like to be close to warm bodies." In a later dream, he found himself snuggling with a big black bear in bed, which would have been more enjoyable had the bear not recently been in the trash, so that it stank. In the most recent of his dreams, he was playfully skipping along with his children in the tracks of a friendly bear walking in the snow.

A woman dreamer told us she was going to speak about the "cross-over" theme in her dreams. She did not mean "crossing over" in the sense of the transits of the departed; she meant situations in which she had to cross over an obstacle ranging from a mountain to a busy street. Though the details of the five dreams in which she flagged this theme were richly specific and individual, the common theme emerged in a most interesting way in her narration.

In the first dream in the sequence, she needs to cross over a man-made mountain with rubber boulders; she manages this easily, even dancing with friends on the top. In a later dream, she has to cross over a golf course set in the side of a steep hill to get to where she wants to be. In the last dream in the series, she must cross over a busy and confusing city street and make a loop through alleys where she begins to lose her way, until three men appear to play helpful guides. We noted a promising transition from needing to deal with a series of challenges or obstacles created by men to men figuring as helpers. This seemed to resonate with major life transitions over the same period.

Running out of road

I came to this circle intending to speak about my evolving visionary relationship with the red fox over many years, though that story could easily fill a whole book. After hearing the "cross-over"sequence, I opted to talk about a different dream theme, which I defined as Running Out of Road.

It had been a recurring dream theme for me, over decades. I'm on a road that becomes progressively more difficult or simply more rustic. In some versions, I run up against construction, a barrier or a brick wall.

In a recent dream of this kind, the paved road ends and becomes a kind of farm track that in turn peters out. Now I am driving my car cross-country, over rocks and through little streams. Soon I am on an upward slope that is getting steeper and steeper, while the rocks are becoming enormous boulders. My car is doing very well but finally it stops atop a huge boulder on a near-vertical gradient. I get out of the car and inspect the situation. I calculate that my car can make it to the top with just a little help. I need to find one or two people to give a push. This can be managed if I go to a nearby village and ask for help.

I found this dream enlightening. In my work, on many fronts, I had reached a point where I found myself very willing to ask for help and cooperation from others.

I also noticed, exploring this theme, that our dream histories are non-linear. They circle and spiral around certain themes. In the past, my dream self has resolved the challenge of running out of road by getting out of the car and picking it up like a cardboard dummy and carrying it to where he needs to go. On another occasion, confronted by a vertical, seemingly impossible cliff, my dream self was pulled up by an ally above that revealed itself - when he reached the top - as a mountain lion. 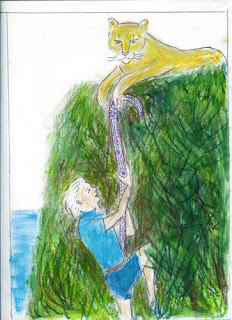 We never want to forfeit the rich detail of an individual dream, which may offer specific insight and guidance on multiple levels, relating to the possible future (for example), to the state of our mind and body and relationships and/or to our parallel lives in other times and in alternate worlds. But it's fun to track those repeating and ever transforming personal themes and symbols.

In approaching symbols, we want to remember the very useful distinction Jung made between sign and symbol. A sign stands for something known; a symbol connects us with something we do not yet know. So tracking our symbols becomes an excursion into mystery.