When you're losing teeth in a dream 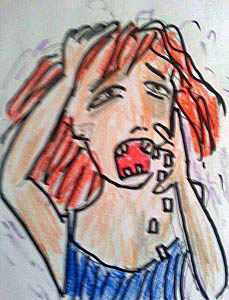 I would love the Tooth Fairy to give me a dollar, or even a nickel, for every dream of problems with teeth that I've heard over the years. When I opened this theme for discussion in one group of dreamers, the first two comments reflected two radically different ways of looking at a dream of losing teeth. Both are valid.
One dreamer said that when she dreams of loose teeth that may fall out, she thinks about the need to express herself carefully. This is a personal association that certainly speaks to me. Another dreamer reported that on her mother's side of the family, it's strongly believed that if you dream a tooth falls out, this means that someone connected with the family is going to die.
The belief that losing a tooth means illness or death in the family has been shared by many cultures and codified in their dream books. We can trace this from the New Kingdom Dream Book of ancient Egypt through Artemidorus, the 2nd century Greek author of The Interpretation of Dreams (whose title was borrowed by Freud) on through the dream books that are bestsellers in the Islamic world today.
Dream books like those of Artemidorus and Ibn Sirin not only say that a lost tooth means that someone close to you will die; they predict who that will be, based on which tooth is lost and its "status" in the "house of the mouth".
If you have been raised in a belief system like this, it's likely not only that you will interpret a dream according to it, but that the actual content of your dreams will be shaped by those beliefs. So we get what anthropologists call a "culture-pattern" dream. You dream that a molar falls out because that's what your dream producers - following the agreed vocabulary of images - give you to let you know that an older member of the family will pass on.
Back to the present. As always, while recognizing the apparent universality of the dream of losing teeth, we want to be alert to the specific details of a dream with this theme, the dreamer's feelings, and the spontaneous personal associations that arise. If you tell me a dream of losing teeth in a general way, I'm likely to do two things pretty quickly: (1) inquire when you last went to the dentist and (2) explore with you whether there are things you need to spit out - by expressing yourself, or perhaps by purging, or both.
But I'll also consider lots of other things that may be involved in losing teeth, literally and metaphorically. For example:
- Teeth are tools and weapons and power in the animal kingdom. If I am losing teeth, am I at risk of losing my power, which could mean my financial resources, my fighting ability or my sexual potency?
- Am I aging, which could mean maturing (we lose our teeth) or just getting older?
- Am I eating right?
- Am I concerned about my appearance (and do I need to be)?
How you lose your teeth in a dream is worthy of special attention. Sometimes you may find your dream self fussing with a loose tooth until you pull the tooth out. One woman reports that on a number of occasions she found herself fussing with one loose tooth, then another, until she succeeded in pulling all her teeth out. This prompted her to start thinking about where, in waking life, excessive worry over a problem might tend to compound it.
Common expressions and sayings involving teeth can also give us clues. “You’ve bitten off more than you can chew” might be relevant – especially if you are losing teeth in the dream. A "toothless lion" is a term used for a person who has lost powder. Off and on, I've found myself saying (usually humorously), “You lie in your teeth", which reminds me of the Chinese tradition that if your teeth are falling out in a dream, it’s because you’ve been telling lies.
There are further variants on the theme. Some dreamers have gum stuck in their teeth, which for me would raise the theme: what is preventing you from expressing yourself? Some dream of being gagged. An especially gruesome version of the gagging theme was a dream in which a woman had something like a horse's bit rammed into her mouth, so violently that some of her teeth were knocked out. The ends of the bar where then tied with straps around her head, very tightly. She was unable to cry out, and felt more of her teeth falling out. The dream suggested a whole structure if repression, maybe dating a long way back through family history. I did not have an exact context for this dreadful dream image until I read (in Richard Flanagan's brilliant and searing novel Gould's Book of Fish) about a vicious device called a "tube gag" that was operated in a very similar way to "teach silence at the price of agony" to convicts in early English and Australian prisons.
The happiest dream of losing teeth I've ever heard came from a woman who reported that in her dream her teeth were falling out, but each time she lost one, a new one would take its place. "It was like my teeth were moving around on a conveyor belt rather than stuck in my gums." That's exactly how a shark's teeth are routinely shed and replaced. I suggested that, if it were my dream, I'd be glad to know that I have the resilience to get through the process of aging and shedding old stuff, and I wouldn't be scared of showing my teeth when a situation demands that!

Teeth may be tombstones but tombstones may also be teeth. On the eve of a visit to the dentist many years ago, I had a rather spooky dream in which I was in a graveyard, looking at a tombstone that was leaning over. I noticed that the tombstone was cracked down the middle. I wanted out of there! After examination at her office the next day, my dentist told me, "Sorry, that molar on the upper right side is cracked. It has to come out.

Drawing by RM.
Posted by Robert Moss at 7:00 AM