How you know your world just changed 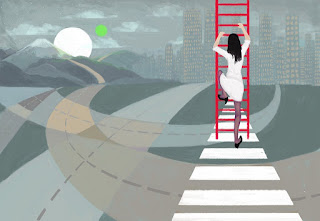 The Many Worlds hypothesis in physics suggests that the universe is constantly splitting, that we are living at any moment in one of uncountable parallel universes. We find ourselves in parallel lives in dreams. Careful reporting of these episodes in a journal over time can provide state-specific evidence of the reality of parallel worlds. Can we catch a moment when the world shifts with our eyes open? For me, this means staying alert for anomalies, like the moment in the movie "The Matrix" when the black cat walks across the room the same way twice and you know that a world simulation is about to change. In Hiruko Murakami's magical novel 1Q84, Aomame realizes there has been a shift in her world when she goes down an emergency staircase from a clogged expressway and notices the cops are wearing different sidearms, heavy pistols instead of stubby revolvers. When did that happen? Starting with this single observation, the anomalies multiply until she - and eventually some others - are looking up at two moons in the sky and it is obvious that they are in a different world (unless they have gone crazy). I noticed an anomaly on my street this week, small in itself but of the kind that may be a marker that the world just changed. One of my everyday synchronicity games is to note unusual license plates. I spotted a plate on a silver Audi: DSB 1914. This drew my attention because "1914" carried me back to the Great War, which has often featured in my dreams and historical interests. I wondered who or what DSB might stand for. Then I noticed something more interesting about the license plate. it was German No doubt about it. To the left DSB 1914 was a panel with the twelve stars of the European Union and a D for Deutschland.

It is very unusual to see a vehicle with European plates in my small rustbelt city in Northeast America. But this bit of Sidewalk Tarot was not the kind of anomaly that sows the thought that the world just changed. That came the next day. Walking my dog along the same block, I came to the silver Audi parked in the same spot. The license plate had changed. It was no longer German. It was an orange New York plate. I was glad I had snapped a photo of the German identity the Audi had worn before the world shifted. I shall be watching the moon very closely.
Art inspired by 1Q84. Seeking artist's identity in the world with one moon.
Posted by Robert Moss at 7:32 AM

Wow. I love reading this. I know this happens more often than I notice. It has inspired me to pay more attention to the signs like this. I got goosebumps reading this post. Thanks.