The archangel of dreams 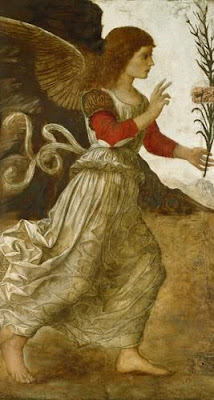 Gabriel is the archangel of dreams, for all three peoples of the Book – Jews, Christians and Muslims.
He first appears in scripture in the Book of Daniel, where he explains a troubling vision that Daniel does not understand. The archangel shows himself in the form of a man. But when he comes closer, Daniel is seized with fear and awe and falls prostrate on the ground. [Daniel 8:13-16] When Gabriel comes again to explain a prophecy about the restoration of , he “swoops” on Daniel in “full flight.” [Dan. 9:22]
The name Gabriel is a composite of two Hebrew words, meaning “man” (gever) and “God” (El). As Rabbi Joel Covitz comments, “Gabriel brings man to God and God to man, thus divinizing man and humanizing God.” [1]
In the Talmud, Gabriel figures as an angel of justice, smiting the hosts of Sennacherib with a sharpened scythe. He is also an interpreter between nations, fluent in languages such as Syriac and Chaldee. In Jewish tradition, Gabriel is sometimes identified with the nameless voice that told Noah to prepare the , and the invisible force that prevented Abraham from sacrificing Isaac, and the voice that spoke to Moses from the burning bush.
The Jewish mystical text, the Zohar, identifies Gabriel both as the Master of Dreams, and as the angel who mentors the soul before birth. In this conception, the bringer of dreams is also the source of the soul’s knowledge of its destiny and its place in the order of creation.
In the Christian story, Gabriel is the angel of the Annunciation. He appears to Mary to announce the coming of the Christ, as he formerly appeared to Zacharias to announce the coming of John the Baptist. He visits Joseph in a dream to reveal the identity of the divine child. He returns in another dream to warn the family to flee from Herod’s persecution.
The beauty of his face and form are almost feminine in countless Renaissance images of the Annunciation – in Leonardo’s version, for example, and in Melozzo da Forli’s.
The whole of Islam hangs on Gabriel’s relationship, as dream guide, with the prophet Muhammad. The prophet claimed it was Gabriel (Jibril in Arabic) of the “140 pairs of wings”, who dictated the Koran to him, sura by sura. It was Gabriel who escorted Muammad on his Night Journey (miraaj) to gain the personal knowledge of higher worlds.
Gabriel brought Muhammad an extraordinary ride, the Buraq, sometimes depicted as a mule with a woman’s face. Like the human mind, the Buraq is restive and must be calmed by the angel before it can carry Muhammad through the many worlds. They fly to , swift as thought. They ascend to higher realms from the Dome of the Rock. They explore successive heavens – some say seven, others nine – where Muhammad interviews spiritual masters who once lived on earth, as well as planetary angels.
Gabriel parts company with Muhammad at the Lote Tree of the Farthest Boundary. The Lote Tree is unlike any tree known on earth. It marks the outer limit of the realm of images; beyond this, the intellect may not go.
When Muhammad returns to his body, with the inspiration for the Koran, he finds that water from the jug his mystical steed kicked over during its take-off is still spilling onto the floor of his cave. His travels through all the heaven worlds have taken less time than is required to empty a jug of water.
A hadith says that Gabriel used to come to the Prophet in the firm of Dihya Kalbi, the most beautiful of his contemporaries. [2]

Muslims believe that Gabriel descends to earth once a year on the Night of Destiny, towards the end of the holy month of Ramadan.
In Kabbalah, Gabriel is associated with Yesod, Foundation, and the sphere of the Moon. In the Western Mystery traditions, his  color is blue and his element is water. Coptic Christians associate him with Anubis, the canine-headed Egyptian patron of dreaming and astral travel. In Celtic blessings Gabriel is sometimes called the Seer of the Virgin.

My favorite account of Gabriel is from Rumi. The great Persian mystical poet put himself inside the scene in which Mary first encountered the archangel and found that (of course) she was terrified.
Alone in her room, Mary saw a “heart-ravishing form”. It “rose up before her from the face of the earth, bright as the moon and the sun.”
She trembled with fear. She was naked and feared that her body would be ravished by this amazing power.
She was so scared she jumped out of her skin, trusting herself to the protection of God. She was practiced in “flight to the unseen.” “Seeing this world to be a kingdom without permanence, she made a fortress of the presence of God” – and sought shelter in that fortress now.
The angel spoke to her. “I am the true messenger of the Presence. Do not fear me.” As he spoke, a pure light flamed from his lips, like a candle, and spiraled up to the star Arcturus.
“You flee from me from the seen into the unseen, where I am lord and king. What are you thinking? My home is in the unseen. What you see before you is only a portrait. Mary, look closely, for I am difficult to grasp. I am a new moon and a yearning in the heart.
“You seek refuge from the one who is your refuge. You confuse the Friend of your soul with a stranger. You flee from the Friend you seek. Don’t choose sorrow when what is before you is joy.”[3]

Thirty years ago, in bright sunlight, I had a vision of the archangel as a being of feminine beauty formed of solidified light. I fell on my knees,streaming tears, on a dirt road behind the farm house where I was then living. I wrote a poem for Gabriel from that vision.

Wow, so beautiful and wonderful to have all of this information in one place. Thank you Robert!