In praise of Bear medicine 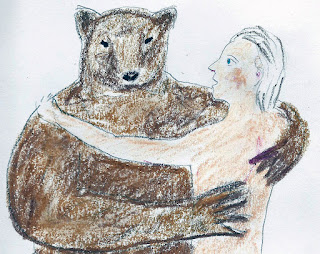 The Bear is the great medicine animal of North America and in Native tradition, the most powerful healers are those called by the Bear in dreams and visions. In ancient Europe, the Bear was the king of beasts, and there was a sacred kinship between bears and humans that we can trace from Paleolithic times.
From caves, in southern France we have evidence that the oldest religious ceremonies conducted by humans may have centered on honoring the Bear.  In ancient Attica, girls danced in bearskins in honor of the goddess Artemis as the She-Bear, in rites of passage into womanhood. In northern Europe, warriors put on bear shirts in order to claim the fighting power of the bear. For the Lakota, who have many ways of approaching the sacred, the most powerful healers are said to be members of the Bear Dreamers Society, called to practice by the Bear spirit in direct encounters in dreams and visions.
Most of us no longer live close to the bear in nature, but bears still appear in our dreams and we can find our way, as shamanic journeyers, to realms of the Medicine Bear and the Great Earth Mother. I was called to follow the path of a dream teacher and healer when I was required to reenter dreams in which a giant bear frightened me by coming inside my house.. When I found the courage to face the Bear and step into its embrace, I discovered that the Bear and I are joined at the heart by something like a thick umbilical, pumping life energy back and forth between us. The Bear told me it would show me what I need to heal and what others need to be healed. This promise has been fulfilled, again and again. I don’t hesitate to say that I owe my life to Bear medicine.
In that early, primal encounter I thought of the Bear as male. Three decades later, I identify with Great Mother Bear, as nurturer and fierce protector. When I have been ill, Bear has often come spontaneously to doctor me, sometimes by opening my body and cleansing and renewing organs before replacing them. I have seen Great Mother Bear help people, again and again, to reclaim parts of heir vital soul energy that went missing in childhood when the world seemed to cold or too cruel. Our inner child often seems to trust the Bear more than the adult self.
I wrote this poem to honor and celebrate Bear medicine:

You feel her under your feet.
You enter her realm through the roots
of the tree that knows you.
She is endlessly nurturing, fertile and abundant.

She will nurse you and heal you as she cares for her cubs.
You can call on her blessing at any time,
once you have found the courage to enter her embrace.


She calms the mad warrior in men.
She strips the berserkers of old skins.
Serve her, and you join the army of the Great Mother
whose purpose is to protect, not destroy.
She will defend you, even from yourself.

When you call back your lost children,
she will hold you together in her vast embrace
until you are one, and whole.
When you reach across the jagged rifts in your family
to forgive and make well, you feel her rolling pleasure.

I love everything about this blog Robert, thank you. She is the core, source and essence of everything I have done for so many years and I did not realize the depth of healing I have personally received at her behest. Always at my back, always in my heart.