The Duke of Jin and the Shaman of the Mulberry Woods: Dreaming the Understory in Ancient China 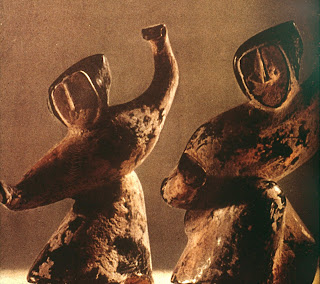 In his dream, the Duke Jing of Jin, a powerful state in ancient , is attacked by a demon with disheveled hair that streams to the ground. The demon beats its breast and leaps up, yelling, “You have murdered my descendants and I have called on the High God for justice!”
The monster breaks down the palace gate and bursts into the state room where the duke is sitting. When the duke flees into an inner chamber of the palace, the demon pursues him, again breaking down the door.
Waking in terror, the duke summoned the shaman (wu) of Sangtian, “who told him everything he had dreamed.” When the duke asked the shaman what the outcome would be, the wu predicted, “You will not taste the new wheat” – in other words, he would die before the next harvest.
After this, the duke became very ill, and asked for the services of Huan, a famous physician from a neighboring state. Before the doctor arrived, the Duke of Jin dreamed that his disease turned into two boys. He listened to them plotting to escape the doctor’s intervention by hiding themselves in spaces between his heart and his diaphragm and between his heart and his throat. When the doctor arrived and conducted his examination, he informed the duke that nothing could be done, because the disease had lodged in places he could not reach with medicine or by acupuncture – between the heart and the diaphragm and between the heart and the throat. The duke acknowledged that Huan was an honest and capable physician, and sent him away with rich rewards.
In the sixth month after the demonic dream, new wheat stood high in the fields. The Duke of Jin ordered his estate manager to have some cut and send it to his baker. Confident that he had survived the end predicted by the shaman who had seen and read his dream, the duke had the wu brought to him. He showed off the new wheat, then had the shaman put to death. The duke was just about to taste the wheat, when he felt his stomach about to explode. He rushed to the latrine, fell in, and died ignominiously.
It was learned afterwards that one of the servants who carried his body from the privy has dreamed in the early hours that he had carried the duke on his back up to heaven. The servant’s dream may have played out when he was buried alive with his master. [1]

This savage tale of dreams and death comes from the earliest narrative history written in , a collection of chronicles known as the Zuo zhuan that were composed between the fifth and fourth centuries BCE.
What is going on here?
According to one of the oldest commentaries, the demon that scares the duke is an angry ghost of unusual power. He is the ancestral chief of the Zhao clan, that the Duke of Jin utterly destroyed. His wild appearance and behavior are those expected, in those days, of a mourner at a funeral. [2]
The curse laid on Duke Jing by the vengeful spirit is confirmed by the shaman the duke summons. According to the narrative, the duke does not tell his dream to the shaman; the shaman tells the duke’s dream to him. In many ancient and indigenous cultures, the dream interpreter who is most respected is someone who is capable of entering your dreamspace and talking to you from his or her direct experience of your dream.
Something of this kind may be at play between the Chinese shaman and the Duke of Jin. But something more is suggested: that the shaman was inside the duke’s dream at the same time the duke was dreaming it. If this were the case, the shaman’s role becomes ambiguous. Is the wu neutral in this matter, and if not, whose side is he or she on?
Though shamans have personal names in many other sections of the Zuo zhuan, this one is identified only as “the wu of Sangtian”. The term wu is not gender-specific, but is more often used of women than men. “Sangtian”, a place-name in modern , literally means, “Mulberry Woods”, in the sense of wildwoods rather than tame silk-producing groves. The descriptive phrase, in Chinese ears, implies that this shaman comes from a place beyond the borders of civilized order and may have a close connection with death, since mulberry wood was used for the topknot of corpses prepared for ceremonial burial. [3]
A prime function of the shaman, elsewhere in the Zuo zhuan, is to deal with intrusive ghosts by propitiating or exorcizing them. Thus Zichan, who is both a shaman and a Zheng minister, deals with the ghost of a vengeful nobleman by relocating it, explaining, “I provide the ghost with a place to return to.” [4] The shaman of the mulberry wood, however, is neither asked nor volunteers to relieve the Duke of Jin of the hostile spirit who has attacked him. The wu simply delivers a death sentence.
We may suppose it occurred to the duke that the shaman was in on a plot to remove him, by reinforcing his fears – in a sense, by pointing the bone – without giving him any chance to reshape the evil future he had dreamed.
In the second dream, the duke is able to see his disease, in the form of two boys who may represent the two Zhao officers he had recently executed. This part of the narrative reflects the understanding, in traditional Chinese medicine, that dreams may provide accurate diagnosis of what is going on inside the body and reveal causes of disease that may go beyond the grasp of Western allopathic approaches. When the doctor comes, he confirms the duke’s dream of where his disease has lodged, and that it is untreatable by the methods at the physician’s disposal.
The problem sounds like a case for shamanic treatment. But the shaman is not called. She is left out there, in the mulberry woods, until the duke dares to hope that he has survived the duration of the ancestral curse that has been laid on him. Then he calls in the shaman – to have her killed – and survives just long enough to see the curse fulfilled. He does not live to taste the new wheat.

Elsewhere in the Zuo zhuan, we learn that the way that dreams are shared and interpreted has a huge influence on what comes from them. As we talk about dreams, as when we talk about life, we are engaged in the making of meaning. We must be careful in choosing when we tell evil dreams, and to whom we tell them. The act of making an evil dream public could help to manifest an unwanted event, as when one ruler – who had kept a dream of his own death secret for three years – finally decided to tell it, and died immediately afterwards. On the other hand, telling an evil dream to the right person can sometimes help to tame or rescript the message it contains.
There is a fascinating example in the eve-of-battle dream of another ruler of Jin, Duke Wen. He dreamed that he was grappling with the ruler of , when his enemy threw him to the ground and started sucking out his brains. Duke Wen was terrified until his minister Hu Yan pronounced that the dream was highly auspicious. On his back, Duke Wen, was facing Heaven, while his adversary, bent over him, was face down in the posture of a man receiving punishment. Eating the brains evoked a Chinese proverb about what makes you soft. The minister insisted that Duke Wen’s “brains” would win over his enemy – and indeed, when the battle came, they did. [5]

The Zuo shuan is a dutiful work of linear history, following events year by year according to strict chronology. Across its vast sweep, it is also a book of dreams. If we are willing to make an intellectual and imaginative leap into the collective mind it represents, we will find a way of looking at both dreams and history that is radically different from that of modern Western understanding, and is both fascinating and rewarding to explore.
The ancient Chinese chroniclers not only record dreams and how they were interpreted; they use dreams (and other signs) to interpret the world, and reveal the understory behind human events. In the field of dreams, we can observe and sometimes take part in the interplay of humans and the more-than-human.

Those are interesting stories to read Robert. I always like to read about stories of dreamers in the past and how they dealt with their dreams. Especially when there is some mystery involved. Did the stories of Duke Jing and Duke Wen really happen ? Or are they just passed on myths ?

I am always intrigued and informed by your deep dives into historical dreams. I was sorry when I got the the end of The Secret History of Dreams and am glad to make parts of that journey again through your blog.