Close encounters with gods and angels 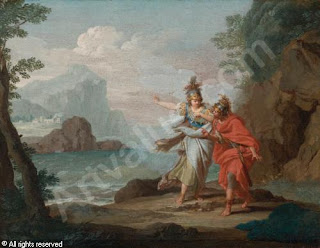 In Homer’s world, gods and goddesses hover close to mortals, and frequently intercede in their lives. It is rare for a human to see a deity in its true form. Most often, perceiving the gods is a matter of sensing a presence, or noticing a light or pattern of vibration, or awakening to the fact that a stranger – an uncannily beautiful youth or maiden, or an old beggar or shepherd in rags – is a divine being going around in drag. The Greeks say that the gods love to travel in disguise.
Old Priam, scared and defenseless, makes his way through a hostile army to Achilles’ camp. The king is helped by a charming young man who appears out of nowhere and acts as his guide. “Some god has held his hand over me!” Priam exclaims, not realizing that his escort is Hermes. Even the hero Odysseus, famed for his intimacy with Athena, fails to recognize her when she appears in some of her disguises. The gods hardly ever identify themselves by name, and when they disclose their presence to mortals, it is an act of “voluntary self-revelation”. As Circe says, “Who would ever see a god, going to and fro, unless he wished to be seen?” When they show themselves, gods take on forms appropriate to the understanding of humans.
While it is hard to see gods as they are, in the ancient world seeing the gods was regarded not only as possible, but as highly desirable. Through ritual and invocation, the Greeks asked the gods to reveal themselves in specific forms, and in a good mood. “Come in kindly mind and in easily recognizable form,” the chorus chants in Sophocles’ play Ajax, reflecting a mode of prayer in common use outside the theater.
When Greeks invoked gods, they hoped that their divine patrons would come and stand over them and surround them with the protection of their aegis. Above all, they sought close encounters in dreams, in the sacred night. As Robin Lane Fox observes in Pagans and Christians, “in their dreams, pagans of all classes and backgrounds kept the closest company with the gods.” Dreams were regarded as a nightly screening of the gods.
Certain individuals brought gods and humans closer together.

“Ever since she has taken on her priesthood the gods have been appearing in visitations as never before, to the girls and women, but also to men and children. What does such a thing mean? Is it a sign of something good?”

-     Question of Alexandra, priestess of Demeter, to the oracle of Apollo at Miletus. 3rd century.

“The angels will come among you, like the prophets,” Jesus promises in the non-canonical Gospel of Thomas. By “prophets” he means not only the venerated characters of the Old Testament, but the seers who were active and highly respected in early Christian communities. Often women, they were believed to consult with angels on familiar terms, to go on otherworldly journeys, and to see into the future. In some Christian communities, such prophets may have been honored above priests and bishops. “When you open a jar of wine or oil,” advised the early Teaching of the Apostles, “take the first fruits and give them to the prophets.”