When a dream won't let you go 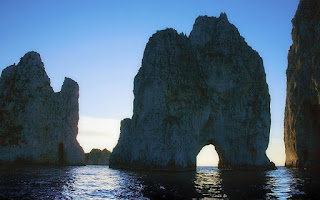 There are dreams that won't let you go. You leave a dream in the middle of the night and go to the bathroom - and as soon as you are back in bed and close your eyes, you are back in the same dream, and the action continues. You wake up again. This time you make a definite break. You might get a snack, read or watch television, or step outside and look at the moon. You go back to bed again, and as soon as you close your eyes, you are back in the same dream.
This happened to me overnight. Though multiple awakenings, I found myself returning, again and again, to an adventure unfolding in Japan. I don't think I was my present self. At any rate, I was much younger. A Japanese magnate and his beautiful assistant were trying to recruit me for a certain project. The technology involved was beyond anything I know about, but perhaps quite plausible. they explained it to me as "making fire from water" and demonstrated by using a few drops of fluid to fuel a heavy vehicle that raced to the top of a mountain. One of the executives confided, over dinner, that the greatest resource of the company is "imagination" and that is why they were talking to me.
Intrigued, I made no attempt to get away from the dream. Towards the end of the night, I lay in horizontal meditation, hoping that more of the plot would be revealed, since I might have the makings of a story here, of a kind that H.G,Wells might approve.
In one of his most masterful short stories, Wells gives a darker version of a dream that won't let you go. In  “A Dream of Armageddon”, a white faced stranger on a train – a solicitor from Liverpool – strikes up a conversation with the narrator when he notices that he has a book about dreams.

"Isn't there something called consecutive dreaming - that goes on night after night?"
"I believe there is. There are cases given in most books on mental trouble."

The stranger says that the psychologists don’t know what they are talking about. He has lived and died many years into the future, and he knows this because of consecutive dreams more real than his current life.

I dreamed that I was another man, you know, living in a different part of the world and in a different time. Night after night I woke into that other life. Fresh scenes and fresh happenings - until I came upon the last

He begins his story by describing himself looking at the shoulder of a beautiful woman, and over her shoulder, at a beautiful view of Capri from a loggia. The white-faced man has never been to Capri in his current life, but his interlocutor has, and is amazed by the accuracy and vividness of his description of its landscapes, of Mount Solano, of I Faraglioni: "Just below us was a rock with an arch worn through it. The blue sea-water broke to green and foam all around the rock..."
The clarity of detail he recalls is amazing.
Then there is his sense that the action is constantly moving forward, whether he is conscious of his dreams or not. Four days pass when he does not remember dreams, then he is back on the island of Capri, in a future world, and everything has moved forward by four days.

I dreamed often. For three weeks of nights that dream was my life. And the worst of it was there were nights when I could not dream, when I lay tossing on a bed in this accursed life; and there - somewhere lost to me - things were happening - momentous, terrible things...I lived at nights - my days, my waking days, this life I am living now, became a faded, far-away dream...

In dream after dream, the solicitor finds himself immersed in the life drama of a powerful man who left government in the “north” to live with his lover on Capri. He is now being urged to go back, because a dangerous demagogue has replaced him and could start a world war. To return, he would have to give up his mistress and he refuses to do this even when she begs him to follow duty and save the world from war.
We see the first warplanes (not yet flying in Wells’ time) over the pleasure island. Eventually we see the couple flee Capri and seek safety on the peninsula. They are killed at the ruined temples at Paestum (and again the narrator confirms the description of a man who hasn’t been there in his present life). The solicitor describes dying without pain, followed by blackness and then a desperate and apparently failed attempt to rejoin his love on the Other Side - and then the conversation ends as the train stops at Euston station.
The story, written before Kitty Hawk and World War I and moving walkways (also part of the dream of the future), has been admired for its vision of coming technology and man-made catastrophe. It’s also an extraordinary depiction of how in dreams we may inhabit a second life – in this case an unwanted one, in a different body in a different time, in the future rather than the past.
The consecutive dreams to which we are called again and again may be full of beauty or terror, mystery or adventure. We want to record them carefully, building memory in our present reality of what is playing in others and capable - with that knowledge - of being ready for the next installment, hopefully capable of making better choices in any world we find ourselves in.

Quotations are from "A Dream of Armageddon" by H.G. Wells, first published in Black and White Budget, May-June 1901.

Photo: I Faraglioni, Capri
Posted by Robert Moss at 6:27 AM

Merry Christmas and Happy New Year, Robert! I have had consecutive dreams of this kind. When I return from the holidays I am now inspired to review some older dream journals to jog my memory of those. Thanks.

From time to time, I have had the impression that I was living another life via my dreams. I couldn't remember exactly what, but I got a strong sense of story and continuity.