Soul alchemy in the friendly silence of the Moon 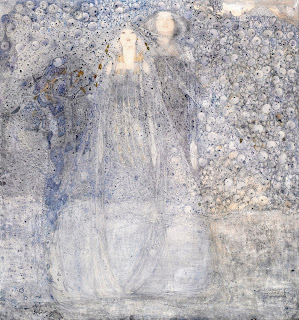 When we are passionately engaged in a creative venture - love, art or something else that is really worthwhile - we draw support from other minds and other beings, seen and unseen. According to the direction of our will and desire, and the depth of our work, those minds may include masters from other times and other beings. We draw greater support the greater the challenges involved in our venture. Great spirits love great challenges.
There is great clarity on how this works in W.B.Yeats' essay Per Amica Silentia Lunae. The title means “The Friendly Silence of the Moon”. He borrowed it from Virgil's description of the Greeks approaching Troy by stealth. Under the poet's moon, Yeats explains how we  can develop a co-creative relationships with minds operating in other times and on other planes of reality. Let's notice that when he refers (in the first line) to "fellow-scholars" he is not thinking about people of his own time, but minds that are working and reaching out from beyond time and space:

I had fellow-scholars, and now it was I and now they who made some discovery. Before the mind’s eye, whether in sleep or waking, came images that one was to discover presently in some book one had never read, and after looking in vain for explanation to the current theory of forgotten personal memory, I came to believe in a Great Memory passing on from generation to generation.
But that was not enough, for these images showed intention and choice. They had a relation to what one knew and yet were an extension of one’s knowledge. If no mind was there, why should I suddenly come upon salt and antimony, upon the liquefaction of gold, as they were understood by the alchemists, or upon some detail of cabbalistic symbolism verified at last by a learned scholar from his never-published manuscripts, and who can have put it together so ingeniously?...
The thought was again and again before me that this study had created a contact or mingling with minds who had followed a like study in some other age, and that these minds still saw and thought and chose.

As well as the "mingling with minds" from other times and dimensions, Yeats wrote, with poetic clarity, about relations with the creative spirit he called the daimon. The daimon lends or withholds its immense energy from our lives according to whether we choose the big agenda or the little one. The daimon is bored by our everyday vacillations and compromises and withdraws its presence when we choose against the grand passion and the Life Work, the soul's purpose.
The daimon loves us best, Yeats perceived, when we choose to attempt “the hardest thing among those not impossible.”