Death calls Jung through the trees 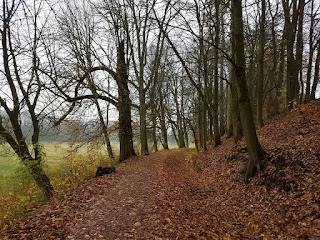 In a cold snap after his wife Emma died, the vine over the front door of Jung’s tower at Bollingen oozed a strange red sap that ran down over his crest. He felt the vine was weeping tears of blood.
Shortly before his death, Jung dreamed of the “other Bollingen”, the counterpart in another world of the sanctuary he had helped to build with his own hands. The place was suffused with sourceless light. The deep voice he had come to trust told him his new home had been completed and was now ready for him to move in. Far below the tower, he saw a mother wolverine teaching her child to dive and swim in shining water.
Jung died at quarter to four in the afternoon on June 6, 1961.Two hours after his death, an old poplar in the garden where he had watched the changing moods of the lake was struck by lightning in a sudden storm. The tree survived, but it was completely skinned; great strips of bark covered the garden. Those who knew felt the strong play of synchronicity in the lightning-struck tree.
Jung might have seen a deeper level of symbolism. In his last recorded dream, he saw a grove of trees “all fibrous roots, coming up from the ground and surrounding him”, with gold threads gleaming among the roots.  He had written that our true life is “invisible, hidden in the rhizome”; what we see in the leaf and bark and blossom passes. Beneath the flux of our surface lives, the rhizome remains. Lightning stripped the bark from the tree, and death stripped away Jung’s body;  life continued, rooted in an unseen world.

- Adapted from The Secret History of Dreaming by Robert Moss. Published by New World Library.

I am leading an adventure in "Dreaming with Jung" in Berkeley, California over the weekend of March 24-25

Fascinating connection between trees and humans. Thank you for the insights into Jung's experiences, Robert. FYI in case you have not heard this might interest you: there is a lot of hype right now about a new docu series on PBS featuring Dame Judi Dench exploring that tree-human connection.

You may recall my dad's coming to dreaming in his final months...a little backstory: he and mom had moved to a new house about 20 yrs prior to his death. Dad had planted a birch tree out front. It was a favorite tree and symbolized their new beginnings. A week or so after dad's death, mom called to tell me that "You won't like this news, Katy. The birch tree has died and we have had to chop it down." At the time mom called me, I had been working on a series of paintings of birch trees and many of them had Dad with a birch tree beside him. I didn't know why I was choosing to paint dad with this tree, until of course my mother provided the answer.