May Brigid's blessings be with you 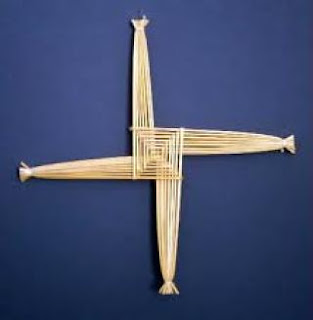 Blessings to you on the day of the High One, the Exalted One. That is the meaning of Brig, from which the name Brigid (also Brigit, Brighid, Brigantia of England and Brigindo of eastern Gaul) derives. The church made the goddess a saint, one of the most beloved saints of Ireland, with various biographies, the best of which is recollected in Kildare, where the flame of Brigid burned constantly until Henry VIII, and burns again today. She is a power of the land, and of the deeper world, that the church and the people can agree on. In Ireland and in Scotland, you feel her presence in stones and trees, in high places and in deep wells.
In the stories told at Kildare, the woman Brigid is born at sunrise, as her mother stands straddling a threshold, one foot out and one foot in. When Brigid’s head comes out, the sun’s rays crown her with flame. We can see why she is the patron of people who open doors between the worlds – of shamans, seers and poets – and of all who work with fire, in the peat, in the forge, in the cauldron of imbas, the fire of inspiration.
Marija Gimbutas wrote of her (in The Living Goddesses): “Brigid is an Old European goddess consigned to the guise of a Christian saint. Remove the guise and you will see the mistress of nature, an incarnation of cosmic life-giving energy, the owner of life water in wells and springs, the bestower of human, animal and plant life.” She is “Mary of the Gael”, and she is the Triple Goddess and Robert Graves’ Three-fold Muse. She is patron of poetry, healing and smithcraft. In Scotland she is Bride, and the White Swan and the Bride of the White Hills. In the Hebrides she is the protector of childbirth.
Lady Augusta Gregory, Yeats’s friend, described Brigid in Gods and Fighting Men as “a woman of poetry, and poets worshiped her, for her sway was very great and very noble. And she was a woman of healing along with that, and a woman of smith’s work, and it was she first made the whistle for calling one to another through the night.” We are now entering the prime time of this High One, when nature awakens around February 1.
She may appear as a snake from beneath the earth, even in Ireland, the country without snakes:
This is the day of Bride the Queen will come from the mound
This is the time of Brigid’s feast of Imbolc which coincides with the lactation of the ewes and the first signs of spring. You know the lambs are coming soon. You see snowdrops pressing up from the hard earth, perhaps through its white mantle. You offer the gifts of the goddess to the goddess: you pour milk on the ground, you bake and leave out special cakes. To she who spins and weaves life itself, you offer woven fabrics or offer a cloth – a handkerchief, a scarf, a pillowcase – to be blessed as it rests on the earth overnight. To this bringer of fire, you light a candle and offer your heart’s flame.
In the old country, in the old way, young girls carry her images – straw dolls or brideogs – in procession from house to house, and the goddess is welcomed and decked with finery. The dolls are laid on in “bride beds”, with a staff or wand of power resting beside them. At Imbolc, as on other days, you may raise the High One’s energy with poetic speech. Best to do this by a stream or a spring, or (if you know one) a sacred well. She does have a fine love of poets and those who bring fresh words into the world.
There is a legend that, in one of her womanly forms, Brigid married the great poet Senchan Torpeist,  foremost among the learned fili (bards) of Ireland. It was this same Senchan, it is said, who recovered the great poem known as the Táin Bó Cúailnge (The Cattle Raid of Cooley) when it was feared lost forever, by raising the shade of the druid poet Fergus to recite all of the verses.
Among the bevy of Celtic blessings in the great repository know as the Carmina Gadelica, collected by Alexander Carmichael in the Highlands and Islands of Scotland around 1900, some of the sweetest call on Brigid. In “Womanhood of Brigit” (#263 in the Carmina Gadelica)
Brigit of the mantlesBrigit of the peat-heapBrigit of the twining hairBrigit of the augury.Brigit of the white feetBrigit of calmnessBrigit of the white handsBrigit of the kine.
Many kinds of protection are then asked of Brigid – safety from death or injury or mishap in many forms. Next comes a verse that makes it plain that Brigid is regarded, among all else, as a guardian of sleep and dreams:
Nightmare shall not lie on meBlack-sleep shall not lie on meSpell-sleep shall not lie on meLuaths-luis shall not lie on me.
I need someone more learned in Scots Gaelic than myself to translate Luaths-luis. Its literal meaning seems to be something like “fast-moving lice” for which our modern phrase might be “creepy-crawlies.” In the “Blessing of Brigit” (numbered #264 in the Carmina Gadelica) we have words that might please the Lady on her feast day, or any day:
I am under the shieldingOf good Brigit each day;I am under the shieldingOf good Brigit each night.Brigit is my comrade woman,Brigit is my maker of song,Brigit is my helping womanMy choicest of women, my guide
Brigid’s Day is also a fine time for courting, and a time to dream, and seek guidance from dreams.

Thank you, Robert, for posting this nice summary of the history and many aspects of Brigid.
May Brigid's blessings be with you as well.
Edie Stone