Welcome to the Twilight Zone, Your Launch Pad for Lucid Dreaming 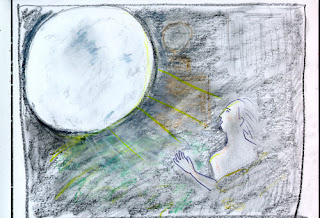 The easiest way to embark on lucid dreaming is to practice maintaining awareness as dream images rise and fall during twilight states between sleep and waking.The twilight zone offers optimum conditions to develop your ability to make intentional journeys beyond the physical body to learn the nature and conditions of other orders of reality.
As you spend more time in the twilight zone, you will discover a notable increase in both your creativity and your psychic awareness. Going with the flow of spontaneous imagery in the twilight zone puts you into the stream of the creative process. It puts you in league with your creative source, mediated by mentors who appear to you in the half-dream state, or coming through cool and clear as a mountain spring. It is no accident that highly creative people — from Einstein to the romance writer and the powerboat designer I met on recent plane trips — are very much at home in the twilight zone
In the language of the sleep scientists, the twilight zone is the realm of hypnagogic and hypnopompic experiences. Hypnagogic literally means “leading toward sleep”; hypnopompic means “leading away from sleep.” But these terms do not take us to the heart of the matter. You may enter the twilight zone before and after sleep, but you may also enter it wide awake, with no intention of sleeping.
It is not the relationship to sleep that defines the twilight zone; it is its character as a border county. It is the junction between sleep and waking, certainly. But more than this, as Mary Watkins wrote beautifully in Waking Dreams, it is “the plane of coexistence of the two worlds." In this borderland, you will find the gates to other worlds opening smoothly and fluidly — if you let them and are prepared for what may follow.
When I allow myself to drift through this frontier region with no fixed agenda, I have the sense of leaning through a window or a doorway in space. Sometimes this feels like hanging out of the open hatch of an airplane. I have come to recognize this as the opening of a dreamgate. Depending on circumstances and intention, I can step forward into the next dimension or haul myself back into physical focus.
From this departure lobby, the great explorers of the imaginal realm have used many gates and flight paths. This is why the twilight state has such vital significance in dream yoga, in shamanic training, in the Western Mystery traditions, in the “science of mirrors” of the medieval Persian philosophers, and in other schools of active spirituality.
According to Tantric teachings, it is by learning to prolong this “intermediate state” and to operate with full awareness within it that you achieve dream mastery and, beyond this, the highest level of consciousness attainable for an embodied human. The Spandakarika of Vasagupta, which dates from the tenth century, recommends the use of breathing exercises to focus and maintain awareness as you move from waking into the twilight state. The dreamer is urged to place himself “at the junction between inhaled and exhaled breaths, at the very point where he enters into contact with energy in the pure state.” This is the entry into conscious dreaming, whose gifts (according to Tantric text) could be immense: “The Lord of necessity grants him during dreams the ends he pursues, providing that he is profoundly contemplative and places himself at the junction between waking and sleeping."
The aim of the practice is to achieve continuity of consciousness through sleeping, waking, and the intermediate state. When this is attained, the practitioner has ascended to the mystical Fourth State — the turiya of the Upanishads. This is the highly evolved consciousness of a person who has awakened to the reality of the Self; it now infuses his awareness at all times.
In the Greco-Roman world, the twilight zone was a place of rendezvous with divine messengers and even the gods themselves. Iamblichus, the author of an important book on the Mysteries, urged the need to pay special attention to “god-sent dreams” in the intermediate state, especially after waking:

“They come when sleep is leaving us, or we are just waking. We may hear a certain voice that tells us concisely what needs to be done. Sometimes we feel surrounded by a presence that cannot be perceived by the sight, but is sensed in other ways. The entrance of the spirit is accompanied by a noise….But sometimes a bright and tranquil light shines forth.”

From the ascent to the Fourth State to a walk-in by a spirit or daimon, there is clearly no ceiling on possibility in this area. But first and last, experiment in the twilight zone is wonderful fun. Think of this as your cosmic playground.

Adapted from Dreamgates: Exploring the Worlds of Soul, Imagination and Life Beyond Death by Robert Moss. Published by New World Library.

I so love the Twilight Zone where Witches cross the borders and Raven children are captured briefly by the guardians long enough for them to see what is directly in front of them. Clarity ... sometimes difficult seen between those widely-spaced golden eyes. Your post, and my stumble upon it was part of the respond to a call for answers. Thank you Robert Moss.

Its fascinating how these state can become more spontaneous, not just in the built in sleep cycle. One has the sense though, of a deeper, greater process, and one often becomes a enhan ced being doing more spontaneous, creative, knowledable things. Where does that come from?