Halloween, when the veil between the worlds thins 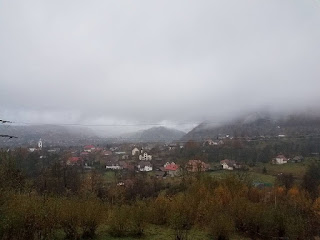 As we approach Halloween, I am thinking of the many meanings of the festival, from trick-or-treat to the turning of the year.
This is the most magical, crazy, shivery night of the year. It is the topsy-turvy, inside-out, upside-down time, when the past lies ahead of you and the future walks behind you, breathing on your neck. It is a night when the doors between the worlds swing open, when the dead walk among the living and the living move among the dead.
The last night of October is the start of Samhain (which is pronounced "sow-in"), the great Celtic festival when the dead walk among the living, the fires are extinguished and rekindled, the god and the goddess come together in sacred union, and as the year turns from light to dark, the seeded earth prepares to give birth again.
It's a time, when the Celts knew what they were doing, to watch yourself and watch comings and goings from the barrows and mounds that are peopled by ghosts and faeries. It's a time to honor the friendly dead, and the lordly ones of the Sidhe, and to propitiate the restless dead and remember to send them off and to set or re-set very clear boundaries between the living and the hungry ghosts. It's a time to look into the future, if you dare, because linear time is stopped when the hollow hills are opened.
As Celtic scholar Marie-Louise Sjoestedt wrote, "This night belongs neither to one year or the other and is, as it were, free from temporal restraint. It seems that the whole supernatural force is attracted by the seam thus left at the point where the two years join, and gathers to invade the world of men."
If you have never learned to dream or see visions or to feel the presence of the spirits who are always about - if you have never traveled beyond the gates of death or looked into the many realms of the Otherworld - this is the time when you'll see beyond the veil all the same, because the Otherworld is going to break down the walls of the little box you call a world, and its residents are coming to call on you.
It's a time for dressing up, especially if you are going out at night. You might want to put on a fright mask to scare away restless spirits before they scare you. You might want to carry a torch to light your way, and especially to guide the dead back to where they came from when the party is over. Before Europeans discovered pumpkins in America, they carried lit candles in hollowed-out niches in turnips.
All of this was so important, and such wild, sexy, shiverish fun that the church had to do something about it. In the eighth century, Pope Gregory III decided to steal the old magic by making November 1 All Saints' Day, or All Hallows Day; so the night of Samhain became All Hallows' Eve, or Halloween for short. A century before, an earlier pope had borrowed the date of the old Roman festival to propitiate the dead - the Festival of the Lemures, or Lemuralia - and renamed that All Saints' Day. But since Roman paganism had been largely suppressed, the church fathers decided to grab the glamour of the Celts, among whom the old ways are forever smoldering, like fire under peat.
Few people who celebrate or suffer Halloween today seem to know much about its history. For storekeepers and the greetings card business, it's a commercial opportunity. For TV programmers, it's a cue to schedule horror movie marathons. For kids, it's time to dress up as vampires or witches and extort candy from neighbors.
My preferred way to spend Halloween is to rest quietly at home, with candles lit for my dead loved ones, and a basket of apples and hazelnuts beside them, tokens of the old festival that renews the world and cleanses the relations between the living and the dead.
This year, however, I am in Dracula country as Halloween approaches, leading a workshop in Romania at a villa within sight of Bran castle, notorious for its associations with Vlad the Impaler. In my experience, the only vampires you are likely to encounter there are the hucksters selling tee-shirts. They are having a Halloween party at "Dracula's castle" over the weekend, in advance of the actual date, but I don't plan to be there. I'll have dinner with our dreamers at the villa. Our appetizer will be raw garlic, to be crushed or sliced over toast with olive oil and salt. You can never be too sure...

Divination at Halloween: By tradition, Samhain is also a time for divination, since the departed can see across time and at this turning of the year we may share in their powers - and anyway, at New Year who doesn't think about what the year ahead may hold? The 1904 postcard in the illustration above shows a young woman looking in a mirror
in hopes of spotting her husband-to be, a survival of an ancient rite.

Photo: The view from my terrace in Dracula country as Halloween approaches. Bran castle, notorious for its associations with Vlad the Impaler, is hidden in the mist.
Posted by Robert Moss at 12:09 PM