Visiting Yeats in the Magic Cottage 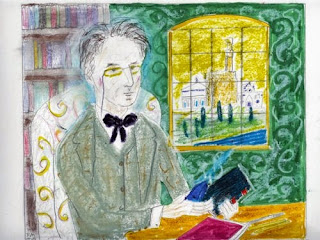 I have enjoyed a lifelong relationship with William Butler Yeats. I have always loved his poetry and have been able – since elementary school – to recite long passages from memory. I have had dreams and visions of Yeats and his circle for as long as I can remember. He was not only a marvelous poet; he was a Western magus, one of the leading figures in the Order of the Golden Dawn.
Yeats began to appear in my dreams at night as well as my daydreams and willed journeys in consciousness. In these dreams, I sometimes seemed to be living in his era – sometimes I seemed to meet Yeats in another reality altogether.
Many years later, I dreamed I received a message from him inviting me to visit him at home. I was not sure where ‘home’ for Yeats might now be, but it did not appear to be in . In a subsequent vision, in that promising state of fluid awareness that sometimes develops in the hypnagogic zone between waking and sleep (or vice versa), I found myself floating above my body, up through the ceiling, and then through some kind of mesh that looked like an intricately woven fabric or netting.
I was drawn up as if a traction beam had been turned on. I was under no compulsion, but I let myself rise on the intention of the one who was calling me. I had no doubt who that was. His lines were running through my head:

I shall arise and go there, and go to Innisfree…

Oh, yes, the early poem that has been quoted so often that Yeats himself got bored and irritated by it, vastly preferring the maturity and complexities of his later work. But its rhythms helped me travel, helped me swim through the subtle air. You don’t reject a wing song that works (and indeed, Yeats wrote many).
I passed through many landscapes, perhaps whole worlds. They were separated by dividing partitions that were sometimes like cloud-banks, sometimes like membranes that stretched to let me through, and sometimes like woven fabric or netting. I came at last to what appeared to be a pleasant country cottage on a winding path. The flower beds were bright with color. It seemed to me that, as I glanced around, the colors at the edge of my peripheral vision would change. Behind the cottage was a gentle river, and on the banks of the river, spires and towers that might have been those of . I began to drift along the path beside the river and saw another town beyond the first, this one quite certainly Italian; the architecture was that of the Quattrocento Florence or the Urbino that Yeats had loved and sometimes threatened to make his sanctuary from the critics and civil unrest in Ireland.
I was thrilled that scenes the poet’s words had often conjured in my mind in lesser, drifting states of reverie were now so vividly and palpably available to explore. I hurried toward a palazzo worthy of a Medici that looked as if it has been constructed that day.
But again there was that tug of another’s intention, and I allowed it to pull me back to the cottage. Did the cottage really have a thatched roof before, or was that detail changed while I was looking elsewhere?
Through the door, long a hall, and there was Yeats, sitting at a broad table covered with books and papers. Through the leaded glass window at his left hand I saw the cities along the river; they changed from one to another at the blink of an eye. I was excited to see that Yeats was continuing to study and to write. I wondered whether it hampered or helped his craft that his new work would not be published on earth. He was patient with me, letting me gradually awaken to the understanding that, from his new perspective, the most important from of publication might be to inspire others, to operate as one of those ‘teachers of the thirteenth cone’ he wrote about in A Vision.
He showed me a large blue crystal lying on his desk. He was most insistent that I should use this blue stone for creative inspiration and to open and focus the third eye of vision. This blue crystal was a place in which to see, and a connection between the two of us.
He gave me some personal guidance and an update on certain psychic crosscurrents involving individuals and group that had been caught up in psychic battles in the past, in the time of the great rift within the Order of the Golden Dawn and in the darker times of the struggle between British magicians and the Nazi occultists. I asked Yeats where exactly we were.
He told me very precisely: “We are on the fourth level of the astral plane”. It seemed this was a neighborhood essentially reserved for people of creative genius, for writers and artists and musicians.
I felt immensely privileged to have been given this tour of Yeats’s environment. It was not clear to me whether he lived in the cottage alone; I was not shown the private rooms. I did feel quite certain that this Yeats was embarked on a vast new project, though its exact nature was not yet made clear to me.

Speaking of blue crystals i wrote a poem three days ago that kinda relates ill share it.:
Horses riding through the sky
Protecting the diamond
In the centre from earths cry
Diamond of the sky.
To whom you belong?
Hidden away.
Only reached by hand
To be spread all over the land.
Diamond of the sky
Its your birthday
I am taking you to play
With me along
through this golden valley pathway.

Before i finalized that poem the last line was through this crystal pathway.

I didnt know it was yeats birthday today. Nor did i think about yeats when i when i wrote this poem. Hahha wow. See i knew this world is magical! Hahaa