Jung heals with a lullaby: the healing power of song 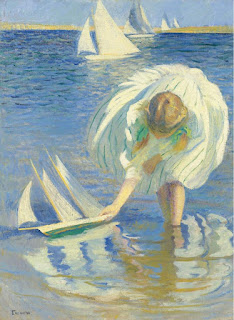 Jung agreed to see a woman who had “incurable” insomnia that had resisted all previous treatment. In her presence, he found himself remembering a lullaby his mother had crooned to him in childhood. He started humming it aloud.

The song was about a girl on a little boat on a  river, full of gleaming fish. It evokes the rhythms of wind and water. Jung’s patient was enchanted. From that night on, her insomnia was gone. Her regular doctor wanted to know Jung’s secret.
“How was I to explain to him that I had simply listened to something within myself?,” Jung reminisced, late in life, in the presence of his assistant Aniela Jaffe. “I had been quite at sea. How was I to tell him that I had sung her a lullaby with my mother’s voice? Enchantment like that is the oldest form of medicine.”
Ancient and indigenous peoples know that the right song is a way of transferring power and of raising and entertaining the spirits. In the Mohawk Indian language, the word for song, ka'renna, literally means, "I am putting forth my power. In the language of the Temiar-Senoi of the Malaysian rainforest, a song of power, typically delivered by a dream, is a norng, which means a "roadway"; this may a path for the soul between the worlds, or a path for the traveler through the jungles of everyday life.
When I open circles, we often sing a song for Mother Bear I have borrowed from the Mohawk people. It is both a shaman song that calls the great medicine animal of North America into the gathering, and a traditional lullaby used to comfort children in the night.
Don't cry little one
Don't cry little one
The Bear is coming to dance for you
The Bear is coming to dance for you
When Jung acted, spontaneously and intuitively, to bring healing with an old lullaby, he acted in the tradition of the spirit singers and word doctors all our ancestors new and valued. We need to reclaim their ways.

Brilliant and beautiful. Just reading these words I feel at peace knowing such truth.

Music is the Sound of God Making Love with Creation.

I just recently found your blog, and I absolutely love it; I love how it has a little of everything. I look forward to reading a lot more!
Work at Robert Greene Books Corp.