How do you look in the dreams of your parallel self? 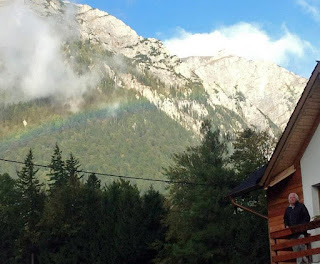 I slip in and out of the lives of parallel selves, and others, in dreams and in reverie. I am open to the idea that they are leading continuous lives, on parallel event tracks, and that from their points of view, I am a character that exists in their dreams, when they remember dreams.
It requires little imagination for me to picture a worldly-wise Robert with a much fatter bank account and a different view of reality sitting down to Sunday brunch and talking about a dream in the following way: “I had the strangest dream last night. I was in Dracula country, in the mountains of Transylvania, or some such place. I was persuaded to hire some evil-looking road cowboy to drive me up a crazy one-lane road to see some natural feature the locals call their Sphinx. They said he boasted that he had killed a fox on that road and cut off the head as a trophy. The next moment, he had driven us halfway off a cliff.”
What my parallel Robert might recall as an odd dream was a quite literal, physical event for me. On a dream archaeology expedition in Romania in October 2012, I set off with local friends to see the Sphinx of Bucegi, a celebrated natural rock formation regarded as a major energy spot, near a cave associated with an ancient shaman-god of the Dacians and the mystical White Wolf said to watch over this land.
We walked through the woods from the pleasant pensiune we had booked for my workshop, facing the  Caraiman monastery, whose construction was inspired by a priest who dreamed of a church that needed to be built around a fir tree at this site. We intended to ride up the mountain to the Sphinx by cable car, but a road cowboy with a four-wheel drive persuaded us to hire him. This proved to be the wildest ride of my life, up a steep, narrow road with hairpin bends and no railings at the edge of dizzying cliffs. The road was often partly blocked by construction or landslides, and we frequently encountered cars and trucks rushing down in the middle of the road as if bent on a head-on collision.
The road cowboy drove as if possessed, but I assumed this was local custom and he knew what he was doing. I could not follow his conversation with my Romanian friends, but I was struck by his hand-waving animation as he recounted a story at a point where the road was only dirt and craters and lumps of rock. Soon after, the driver made a wild swerve to the right to get around a protruding boulder, taking us to the edge of the cliff — and then partway over. We were now stuck in the dirt, hanging over the cliff, as the driver gunned the car back and forth, succeeding only in getting us deeper into the dirt, while the Jeep leaned, little by little, further over the cliff.    “Time to get out of the car,” I said quietly.
We left the driver with the vehicle, phoning for help, and walked for twenty minutes down the winding road to a cabină— a rustic inn and restaurant — to recover with Ursus beer and spicy sausages. On the walk, my friends told me that just before he nearly took all of us over the cliff, the driver had been boasting about how he had killed a fox on that section of mountain road and then decapitated the fox to mount its head on a wall as a trophy.
It seemed we had traveled that day with a man under a fox’s curse. Through it all, I felt oddly detached, and never in real danger, as if we had been under the protection of an unseen hand. Perhaps it was the man who had taken the fox’s head who was under the real danger on that high and stony road.
My parallel Robert, remembering this as a dream, might discuss it as a set of symbols, seeking a Freudian or a Jungian interpretation. He might shrug off the dream as simply "bizarre", or attribute it to something he ate. He might give some thought to foxes and fox hunters, and the possibility that he might travel to Romania and should consider his transportation options carefully. If he has read Jung, he may study the fox-cursed driver as the Shadow, and the Romanian girls as anima figures, and the Sphinx of the mountains as a form of the Self that is hard to attain.
Wherever his mind turns, my parallel self is likely to miss the fact that what is a dream for him was a physical experience for me. But wait - who am I to judge? Some mornings, when I return from his life, I talk as if he is my creation. When I share dream reports in French, I say, "J'ai fait un rêve", "I made a dream", which implies that I made him.  I don't know whether his French is better than mine (I hope so!), but I can hear him talking as if he made me.

I suggest the following thought experiment: Imagine you are in the situation of a parallel self who is trying to make sense of events in your day as scenes from a dream.

Photo: In the Bucegi Mountains of Romania, 2012