The White Goddess and the habit of coincidence 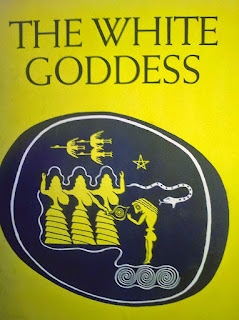 The White Goddess is a "queer" and difficult book, as the author, the poet and novelist Robert Graves, cautions his readers in a foreword. The subtitle in itself may scare away some readers: A historical grammar of poetic myth. Yet it is a book I find myself returning to, again and again, over the years - though since I was a teen I have never been mad enough to try to read it from front to back.     The whole book is a celebration of the Goddess, as she may have been worshiped in matrifocal Old Europe, and other places, before the advent of patriarchal gods installed by patriarchal men. The material came to Graves, and came through him, in a marvelous flow; he dashed off the first draft (then titled The Roebuck in the Thicket) in just three weeks. Specialists will carp at his prodigious but errant scholarship, which is guided by rhyme and resemblance rather than any logical ordering. Few who are learned in the languages and customs of the Celts, in his day or ours, will accept him as an irreproachable source on the Battle of the Trees or the Matter of Britain.     Yet it is impossible not to thrill to the passion of a poet who proclaims that the business of poetry is to serve the Three-fold Muse, and restore the Goddess, and gives us the most rousing and transfiguring (if not the most literal) version of the Song of Amergin that has ever been sung in English.
I am a stag: of seven tines,
I am a flood: across a plain,
I am a wind: on a deep lake,
I am a tear: the Sun lets fall,
I am a hawk: above the cliff,
I am a thorn: beneath the nail,
I am a wonder: among flowers,
I am a wizard: who but I
sets the cool head aflame with smoke?
In writing The White Goddess, as in other inspired work. Graves was certain that he was not alone in his creative space. In addition to what stirred in his imagination, he noticed objects in his physical environment showed up in ways that suggested a hidden hand, from the realm of the Goddess. In a postscript he added to The White Goddess in 1960, he recounted that when he started on the first draft of that book


I had in my work-room several small West African brass objects - bought from a London dealer - gold-dust weights, mostly in the shape of animals, among them a humpback playing a flute. I also had a small brass-box with a lid, intended (so the dealer told me) to contain gold dust. I kept the humpback seated on the box. In fact, he is still seated there; but I knew nothing about him, or about the design on the box-lid until ten years had gone by. The I learned that the humpback was a herald in the service of the Queen-mother of some Akan State; and that every reigning Queen-Mother (and there are a few reigning even today) claims to be an incarnation of the Triple Moon Goddess Ngame. The design of the box-lid, a spiral, connected by a single stroke to the rectangular frame enclosing it - the frame having nine teeth on either side means: ‘None greater in the universe than the Triple Goddess Ngame!’ These gold weights and the box were made before the British seizure of the Gold Coast, by craftsmen subservient to the Goddess, and regarded as highly magical.

When he learned the meaning of these African objects, Graves suspected that an African version of the Moon Goddess had played a part in his inspiration. The story deepened after World War II, when he returned to work on his manuscript. He was now writing about the sacred king, first the consort and then the sacrificial victim of the Goddess in certain traditions. Now a collector named Georg Schwartz bequeathed to Graves "five or six more Akan gold-weights, among them a mummy-like figurine with one large eye." Graves was able to have this strange figure identified as the Akan king's okrafo priest, who in later times served as a surrogate victim, in place of the king. "The okrafo figurine lay beside the herald on the gold box, while I wrote about the Goddess's victims."     After publication of the first edition of The White Goddess, "a Barcelona antiquary" invited Graves to choose a stone from a selection of Roman gems. Among them was "a stranger", a banded carnelian seal from an earlier culture, engraved with a stag galloping towards a thicket with a crescent moon on his flank - the very image that had given the poet his original title,The Roebuck in the Thicket.     "Chains of more-than-coincidence occur so often in my life," Graves observed, "that, if I am forbidden to call them supernatural hauntings, let me call them a habit." He hastens to add that he's not keen on the word "supernatural", since he finds patterns of "more-than-coincidence" entirely natural, though escaping the explanations of science.     Call them a habit. I like that very much. Meaningful coincidences or correspondences do multiply when we are charged with passion, and in forward movement on the roads of life and creation, Goddess knows. 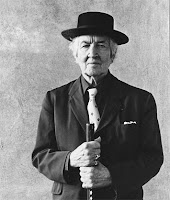 I first posted this little piece on a poet's experience of living on the mythic edge a few years ago. I am posting it again because a friend just told me that Robert Graves gave her important counsel on a mythic theme in a dream. I was invited to dine with Robert Graves when I was a 19-year-old student and he was on tour in Australia. I know, from my experience with other dead poets, that their advice is always worth heeding.
Posted by Robert Moss at 3:03 AM

I'm so glad you did post it, and that a friend on facebook shared the link. '... it is a book I find myself returning to, again and again, over the years - though since I was a teen I have never been mad enough to try to read it from front to back' describes me too. I thoroughly enjoyed reading this post; thank you.

Hi Robert, thank you for posting about Robert Graves and The White Goddess. I was part of your teacher training programme in Prague and suggested that maybe you would be interested in doing a workshop on Mallorca where Robert Graves lived. It is a very special part of the island and people often report having intense dreams. I learned that Graves wrote a book about Dream Interpretation in the 1920s but it is now quite rare in English so I haven't been able to find out what exactly is in it. Warm Greetings from Deia, Monika

Dear Monika, Lovely to hear from you. I would love to teach on Mallorca! Let's grow that dream. I'll hope to welcome you into Level 2 of our dream teacher training in Prague next June (and September). Bright blessings.