Yeats' secret working mind and the importance of Edmund Dulac 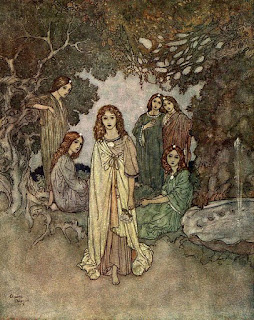 I dreamed again into the secret working mind of W.B.Yeats, my favorite dead poet. Of a story he wrote, unpublished in his lifetime, from encounters with the ghost of an eight-year-old boy. Of a fierce poetic vision of a man who kept a severed head that rose up in the night with blazing eyes.
When I sought to reenter the dream, it seemed the boy’s name began with H and may have been “Henry”.
An inner voice spoke of the importance of Edmund Dulac.

I was thrilled. I knew there was a treasure map in this dream, and I wanted to use it immediately. I ran to my books. Dreams give us research assignments and sometimes these feel urgent.
I remembered that Edmund Dulac was a famous book illustrator and painter to the Faerie courts, and a friend of Yeats. I confirmed that Dulac painted the portrait of the poet's wife

Georgie that is on the cover of Becoming George, the vast (and vastly excellent) biography by Ann Saddlemyer that is in my Yeats collection.
Dulac created images for the 1925 version of Yeats' extraordinary mystical book A Vision.These include the portrait of the fictional Giraldus – with something of Yeats’s hawk-like features – used as the frontispiece. My inner communication in the hypnompic state left me with the impression that Dulac may have been more involved in Yeats’s magic and encounters with the spirits than I had known.

Life called, and I left my research at this point, nearly four years ago, on the morning of January 9, 2012. Now that I have a little leisure to open old journals and follow their leads, I returned to the possible importance of Edmund Dulac.
I discovered that the artist and the poet saw a great deal of each other in the dark time of the Great War. They attended a seance together in 1917 in which they tried to summon the Wise Men of the East, with the Orientalist Edward Dennison Ross on hand in case translation from Persian, Arabic or Turkish was required. [1]
In a lecture on Art and Magic, Dulac declared in 1924 that “the greatest desire of man in all ages has been the establishment of a means of communication with the rest of the universe.” He joined Yeats in experiments in spirit communication, magical evocation and mutual visioning.
They were both lovers of fairies and fairy story. Yeats painted the realms of Faerie with his words, Dulac with his brush.
They worked together to bring Japanese-inspired Noh plays and mythic dramas, including "At the Hawk's Well" (which In saw in Toronto a few years ago) to stage and salon.
Both sought a new mythology for their century that would make room for the return of Immortals from other times and dimensions. Both turned, again and again, to the legend of the Magi as a key to the confluence of spiritual traditions and the transformation of the Christian story. Yeats wrote an eerie, haunting, dream-infused story, "The Adoration of the Magi"(1897) and later a poem, "The Magi" (1914)

Now as at all times I can see in the mind's eye,
In their stiff, painted clothes, the pale unsatisfied ones
Appear and disappear in the blue depths of the sky
With all their ancient faces like rain-beaten stones,
And all their helms of silver hovering side by side,
And all their eyes still fixed, hoping to find once more,
Being by Calvary's turbulence unsatisfied,
The uncontrollable mystery on the bestial floor.

Three years later, Dulac painted an extraordinary picture of "The Three Wise Men" in the style of a Persian or Mughal miniature. The costumes and the stance of the Magi evoke different traditions, Persian, African, Chinese. The placement of the Virgin's hands around the infant Jesus gives him the look of a miniature Shiva Nataraj.
I discovered this painting only today. In storage at the Williams College Museum of Art, it appears to have been overlooked by scholars and art historians until a remarkable researcher, Jaimee K. Comstock-Skipp, brought it to light in a wonderful article for Relegere. [2] I am grateful that round two of my dream-inspired research brought me to this.
I still need to track the ghost story of H and the tale of the severed head. I may of course be required to write them, if my Yeats is willing. [3] Dreams set many kinds of assignments. 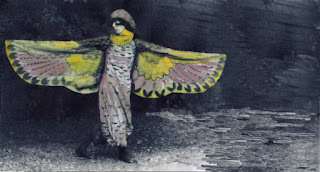 1. Christopher Blake (ed) “Ghosts in the Machine: Yeats and the Metallic Homunculus,
with Transcripts of Reports by W.B. Yeats and Edmund Dulac,” Yeats Annual 15 (2002).

3. For my dreams and visions of Yeats over many years, please see my books The Dreamer's Book of the Dead (Rochester VT: Destiny Books, 2004) chapter 8, and The Boy Who Died and Came Back (Novato CA: New World Library) chapter 37.