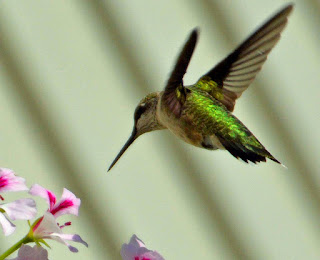 I was leading a weekend workshop in the original California Gold Rush country, at a center just outside Coloma. The workshop was titled "Dreaming a Life with Heart." In the first morning session, as always, I had people introduce themselves by explaining their intention for the weekend. A man in the circle could hardly wait to speak up.

"I got this flyer in the mailbox." He held up the workshop flyer, which I had not previously seen. My coordinator had chosen to embellish it with a picture of a jewel-bright hummingbird, because the text referred to "hummingbird medicine" for the heart.

The man continued, "When I got out of the car, I noticed there was a hummingbird inside. I ran to call my wife, because of the amazing coincidence - the bird on the flyer, and then the bird in the car. When she came and I opened the door of the car, we found that two hummingbirds had somehow gotten inside. As I released them and we watched the two hummingbirds fly away, we knew the two of us needed to be in this circle this weekend."

He explained that he had an additional reason for coming. He had recently undergone quadruple bypass surgery. He hoped that the workshop would be medicine for the heart in several senses. I supported his hope, reminding the group that the hummingbird is said to have the strongest heart of any warm-blooded life on the planet. Its strong heart is what allow it to remain still in the midst of constant beating motion. In one of our meditations, I invited everyone to visualize a hummingbird in their favorite colors hovering before them, and then open their hearts and take its strength inside.

We now have academically-approved evidence that spiritual retreats in which people shift consciousness and explore the deeper life are medicine for the heart, on the physical level as well as emotional and spiritual levels.

“The study shows that a spiritual retreat like the Medicine for the Earth program can jump-start and help to maintain a return to psycho-spiritual well-being,” reported study lead author Sara Warber, M.D., associate professor of family medicine at the University of Michigan  Medical School and director of U-M’s Integrative Medicine program. “These types of interventions may be of particular interest to patients who do not want to take antidepressants for the depression symptoms that often accompany coronary heart disease and heart attack.”

The study used a number of standard benchmarks to assess the success of the program. The spiritual retreat group went from a baseline score of 12 on the Beck Depression Inventory, indicating mild to moderate depression, to an improved score of 6 immediately afterward, a 50-percent reduction. Their scores remained that low half a year later. The control group’s score started at 8 and went down to 6.

Hummingbird medicine is truly good for the heart.

Reference: “Healing the Heart: A Randomized Pilot Study of a Spiritual Retreat for Depression in Acute Coronary Syndrome Patients,” Explore: The Journal of Science and Healing, July 2011

If more doctors would start prescribing this kind of medicine it would greatly improve not only the life of patients but the life of service providers as well.