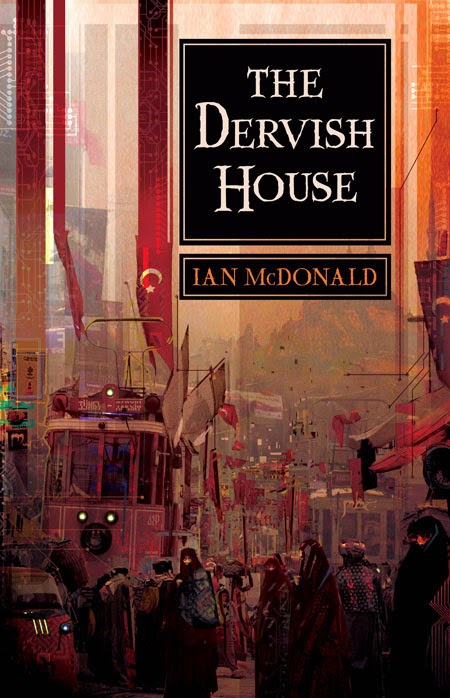 I read the last lines of The Dervish House and said, “Wonderful!” out loud. I want to read the book again to savor all that is in it and to understand more fully some of the intricate description of nanotechnology, hedge fund operations, the history of Sufi lodges, the legend of the Mellified Man, the geography of Istanbul.
Ian McDonald is astonishingly deep and diverse in his knowledge. He writes about everything with exact and fine detail and vocabulary and – amazingly! – this is never wearisome, though it makes the book a slow (but always fascinating) read. I never doubted that his six main characters, sharing apartments in a converted dervish house on the Asian side of Istanbul, are Turks (if we include the elderly Greek “experimental economist”, Georghios Ferentinou, as we must).
There are no concessions to the non-Turkish reader. Every Turkish word is given with the Turkish spelling and necessary diacritical marks. The sole concession is with jinn, rendered djinn, no doubt at the publisher’s insistence. Even Shams of Tabriz becomes Çams with the cedilla under the C.
Just when you think the author can’t possibly trump himself, we read this on the penultimate page, where the focus is on Necmet, who has been turned into a shayk who sees djinn and talks to Hizir (the guide of those who have no earthly guide, called Khidr in Arabic) by a nano-pharmaceutical exploded in a terrorist suicide on a tram:


The army doctor...told him a story about the Mevlana, the great saint whose order built this tekke. The Mevlana has a friend, Shams of Tabriz, a spiritual friend, the other half of his soul, one spirit in two bodies. Together they explored the depths of God in ceaseless conversation. The dervishes grew jealous of the one-in-twoness and quietly killed Shams of Tabriz. When the Mevlana was unable to find his friend, the only possible conclusion was that they had merged and Shams was now part of him.

Why should I seek?
I am the same as he.
His essence speaks through me.
I have been looking for myself.