Truth comes with goosebumps, now and then 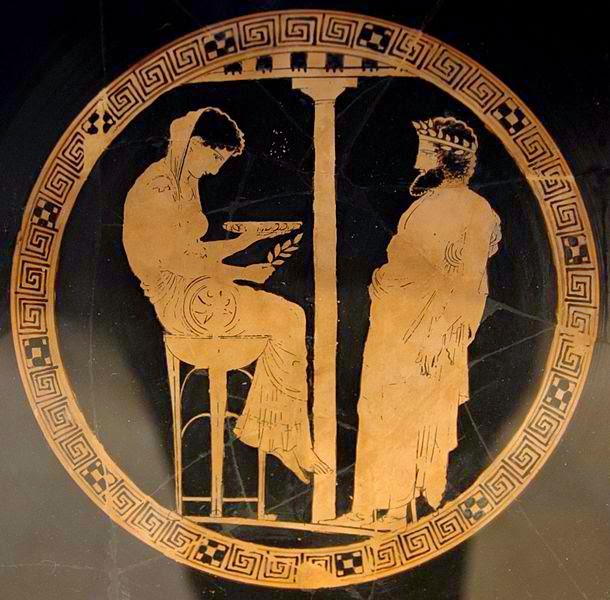 It's a rule of skin, for me, that truth comes with goosebumps (or chicken skin, if you like). There is a science of shivers, which involves learning to recognize and respect what is going on when something exceptional is in the air and your body responds even before your mind can make sense of it.
For the ancients, and in shamanic traditions, trembling for reasons other than cold or external danger has always been regarded as a sign of the advent of the numinous, the coming of gods or spirits. I recorded a recent dream that seemed to take me deep into this realm:


How to Know When the God is Present

I am explaining to a large group of students how to read the signs that announce the advent of the god Apollo at his oracle, and confirm that true messages will be delivered by his priestess. The sacrificial goat starts shaking from the hooves up when the holy water is poured over it. Everything in the environment begins to tremble as if stirred by an unseen wind. The priestess called Pythia, who has been drinking from the sacred spring, sees movement in the bowl of spring water she holds in her lap as she sits on the tripod. The laurel leaves on the branch in her other hand are shaking and murmuring.

Inside the dream, I felt educated pleasure in being able to explain these things clearly. I woke with a mild shiver of recognition, and a deep sense of satisfaction.

Dreams set us research assignments, and this one sent me back to the books, to refresh my memory on the practice of divination in the ancient world, especially at the famous Greek oracle of Delphi, where the priestess known as the Pythia, or Pythoness, was consulted by the rulers of cities and nations.
Through the surviving sources, starting with Aeschylus' play The Eumenides, I confirmed my dream self's version of the operations of the Pythia. In preparing to become the oracle, she bathes in the sacred spring and invokes all the deities associated with Delphi by name, starting with Themis and Phoebe, daughters of the Earth goddess Gaia, and continuing through Zeus, Poseidon, Dionysus and Apollo, who she hopes will speak through her in the presence of a client. She makes burned offering of laurel leaves and barley meal on an altar of the temple. She enters the adyton (sacred chamber) and mounts the golden tripod chair.
In one hand she holds a laurel branch, in the other a shallow bowl. She sits quietly until the laurel leaves start to quiver. The trembling seizes her hand, moves up her arm to her shoulders and chest. Her whole body starts shaking violently as it has been seized by giant hands. This is confirmation that the god is present and that his speaker is in the necessary state of enthousiasmos to deliver true messages.

The bit about the goats fascinated me. In Diodorus of Sicily's World History, I reviewed again the legend of the foundation of the oracle of Delphi. Long before the great temple was built, when the area was wilderness, a goat herder noticed that some of his animals were behaving strangely. They were shaking and throwing their heads back, croaking and bleating.
The herder approached them and saw they were at a crack in the rock from which vapors were rising. When he peered down, a strange exaltation seized him. He started shaking too. Knowledge of many things streamed through him. His family, alarmed by his long absence, searched for him and found him under a tree. He began to tell people their secrets without being asked. He had become clairvoyant. News of the chasm and the power of the vapors spread far and wide, until those in authority determined that things should be put on a orderly business footing. A priestess of blameless life would be chosen as speaker for the oracle, and access to the adyton would be banned to everyone except her attendants.
It would probably be mistaken to attribute the Pythia's powers of truth-seeing to suphurous vapors from the earth, or chewing laurel leaves, or any other chemical assistance. For one thing, recent archaeology suggests the historical oracle of Delphi operated at a different site from the place - called Likoreia - where the goats were set trembling by whatever was rising from a fissure in the earth.*

But there was something else to be learned and remembered about quivering goats. Ah yes, it has to do with divination by animal sacrifice, indirectly referred to my dream-lecturer self. Goats and sheep were the preferred animals used in extispicy, divination by the entrails, a practice common throughout the ancient world and held to be of high importance in establishing the divine will in relation to human decisions. The Mesopotamian baru, a specialist in these matters, held high rank. So did the Etruscan haruspex counselor to Greeks and Romans, under both the Republic and the Empire. The liver was the preferred organ for divination, because it was thought to be a vital seat of an aspect of soul, and a kind of anchor between the spiritual world and the world of the body.
For the haruspex, the best liver for divination was one that had been just carved from the animal victim, still warm and quivering in the diviner's hand. The Hittites liked to observe the spasms of the dying animal as its organs were removed.

These tales of savage times say it again: truth comes with goosebumps. Personally, I can do without looking at animal livers. It's enough to notice those little - or large - shivers that come when something is going on beyond the range of ordinary perception. They are a part of what the bleep we know that we (often) don't know that we know.

* On the archaeology of Likoreia and Delphi, see the vivid account in Robert Temple, Oracles of the Dead (Destiny Books).

Image: The Pythia on her tripod at Delphi, with a phiale (shallow bowl) in one hand and a laurel branch (sacred to Apollo) in the other.

This is truly fantastic Robery
It clarifies so much for me and my journey
When are you planning to come to Copenhagen Denmark?
We would Love you to come

Please let us know
Much Gratitude