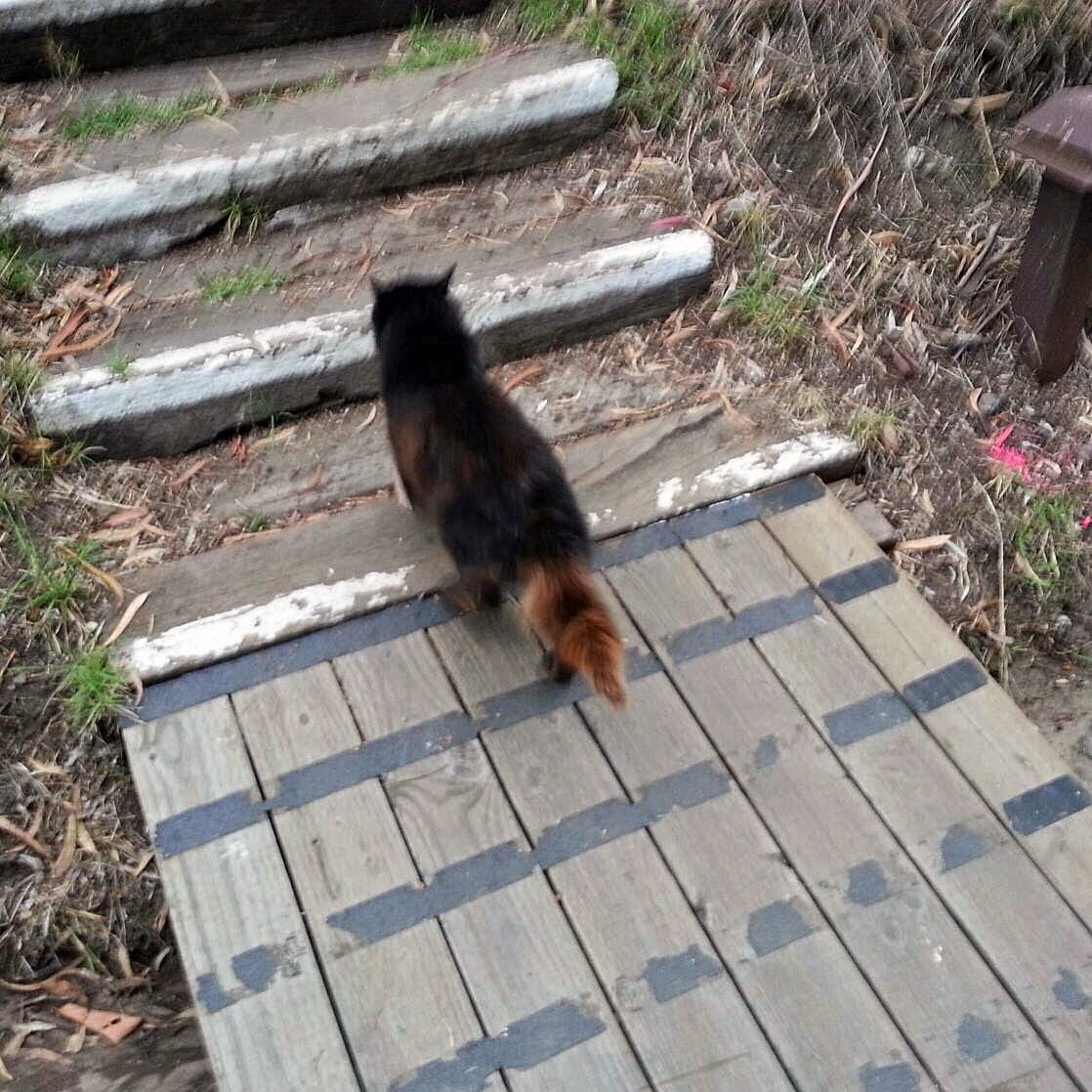 When I announced a playshop titled "What The Fox Knows", devoted to appreciating the Trickster element in life, I was ready for that archetype to come into play, more abundantly than ever. I was not disappointed.
Two days before I traveled to Mosswood Hollow, in the wild woods east of Seattle, to launch the workshop last weekend, I walked a hilly path at the Esalen Institute to open the afternoon session of a retreat I was leading there. I paused to watch a black cat crossing my path. Being a contrarian, I regard a black cat on my road as a positive sign. But this was not any black cat. It had a remarkable red bushy tail, the very semblance of a fox's brush. I felt, with delicious shivers, that a hybrid creature had slipped between the worlds to signal that the Fox was already in play.
I recalled how, years earlier, leading a similar retreat at Esalen, I had spoken to the group about why Fox - even more than Coyote, or Raven, or Spider or Squirrel - is, for me, the quintessential form of the Trickster. The group seemed to be laughing harder than my humor could explain. "Look behind you!" someone shouted. I turned, and saw only coastal cypress and the Pacific Ocean beyond the cliff. I resumed my talk and someone yelled, "Look! He's back!" I turned again, and could not see what they were talking about. They had to explain to me that whenever I spoke of Fox, a fox stuck its head up, looking through the window at the group while my back was turned. The fox hid itself every time I turned to see. This happened three times. There's Fox for you.

My Fox workshop was especially devoted to exploring how the Trickster can be our friend when we are willing to shift and improvise, but is our devil when we insist on sticking to plans and perpetuating old habits. Part of our study was how any setback in life can prove to be an opportunity if we are prepared to look for the door that may be opening when another door slams shut or refuses to open.
A tall and beautiful redhead named Fiona joined us for the Fox workshop, bounding through the back door with sparkling confidence. Of Irish stock, now living in the Seattle area, she had decided to come only the day before, right after hearing about the workshop from a neighbor.

She did well in the journeying, to her surprise. A recurring theme for her became: interrupted life paths and parallel lives. Asked to seek the gift in a setback, she found the memory of  how she resented a friend who had caused her to miss a trip to Amsterdam she thought would be wonderful twenty-five years before, when she was 21. In her journey in the workshop, powered by shamanic drumming, she saw what that missed trip would have generated. “It was as vivid as a movie. If I had taken that trip, I would have met a Canadian man. I saw the two children we would have had together. And the fire that would have destroyed our sweet country home, and the deaths of the three people I would have loved most in the world. As the only one to escape, I would have lived with survivor guilt, clinging to a rotting shack and hard memories until I died. Wow, what a gift my friend messed up my trip all those years ago as my life has been such a blessing!"
On Saturday afternoon, she discovered she had lost the keys to her car and asked help in searching for them. Most people joined in, searching all the places she had been on the property, reaching behind sofa cushions, scouring the floor of the yurt and the paths. Four people went through her purse after she had searched it several times. In the evening, someone used their AAA card to call a professional to open her car. The assumption was that she had locked her keys in her car, which the owner of the AAA card confessed to having done four times herself. The Triple A man arrived after dark and popped the lock. The redhead’s keys were not in the car.
She stayed at Mosswood overnight, thankful that at least she had put some things in her car on the outside chance she decided to stay overnight. She had a second car key at home, but did not know where to find that since she had recently moved.
In the morning, another member of the workshop said that she had received a strong message, "Maybe you can't find the key until you know what you are supposed to unlock." This struck a chord with the Fiona who had made some breakthroughs in her thinking about relationships over the weekend, and especially in a conversation that had just happened moments ago at the breakfast table. Paul, our wonderful host at Mosswood Hollow, came to Fiona and said, “Let me check your purse again. Maybe you have a secret pocket.” Fiona and Paul looked again and found the car key that wasn't there before.
Little doubt the Fox was in play, hiding something to effect certain changes. One thing Fiona noticed, during the time Fox hid her key, was that she had the active support of a whole community when she needed it, though (as she observed) it was typically outside her comfort level to ask and receive help.  It warmed her heart when she looked out of the bathroom window over the frosty landscape in the early morning and saw one of our workshops participants searching her car again.  “Oddly,” Fiona said afterwards, “I felt very calm throughout, with the  feeling that everything was happening just the way it should.”

The theme of parallel lives, as in Fiona's glimpse of the alternate event track that would have started in Amsterdam, became a main preoccupation for our group.
Becky asked for a dream to explore her parallel lives.
At the Sunday breakfast table, she regaled us with a marvelous story. In her dream, she is met by "Mr Foxy", dressed like John Travolta. He tells he she must dance with him as the price of seeing what she wants to see. She is swept into a round of dirty dancing followed by tango.
Then she is offered a choice of veils of different colors. Each veil will take her into a different reality. She chooses purple and is horrified to find herself facing the teeth of a barracuda the size of a shark in an underwater world. She next chooses white and finds herself in a desert watching pilgrims advancing towards a church or mosque. She does not belong here. She chooses gold and is greeted at a carriage by a slick character she distrusts before she checks his rear and sees a fox's tail protruding from under the flaps of his tuxedo coat. She is carried into scenes of a lush life.
We had enormous fun offering feedback over breakfast. But a dream with this much life demands to be performed. So in the course of the day, we turned it into theater. Becky applauded, beaming, as the woman she had chosen to play her dream double was ground into dirty dancing by the foxiest man in the group. When it came time to check out Mr Slick, a prankster in the circle leaped up and pushed a large stuffed toy - a fox, of course - under the back of the player's sweater so the tail hung down.
The bumper sticker was obvious, and irresistible. In appraising a man, Check Out His Tail.

Check out these tails, too, - a friend sent me this collection of fox photos on Tuesday afternoon:
http://www.boredpanda.com/wild-fox-photography-ivan-kislov/

Thanks for the expanded version of Trickster Clan ... wonderful tail:))

What a wonderful time we all had.. thank you for the journeys, humor, ease, and stories you brought. I am still blown away that I was able to experience like a clear movie so much, I just never expected that. Now I am hungry for more!!

thank you for your work..
Fiona