The Way to Seshat's Library 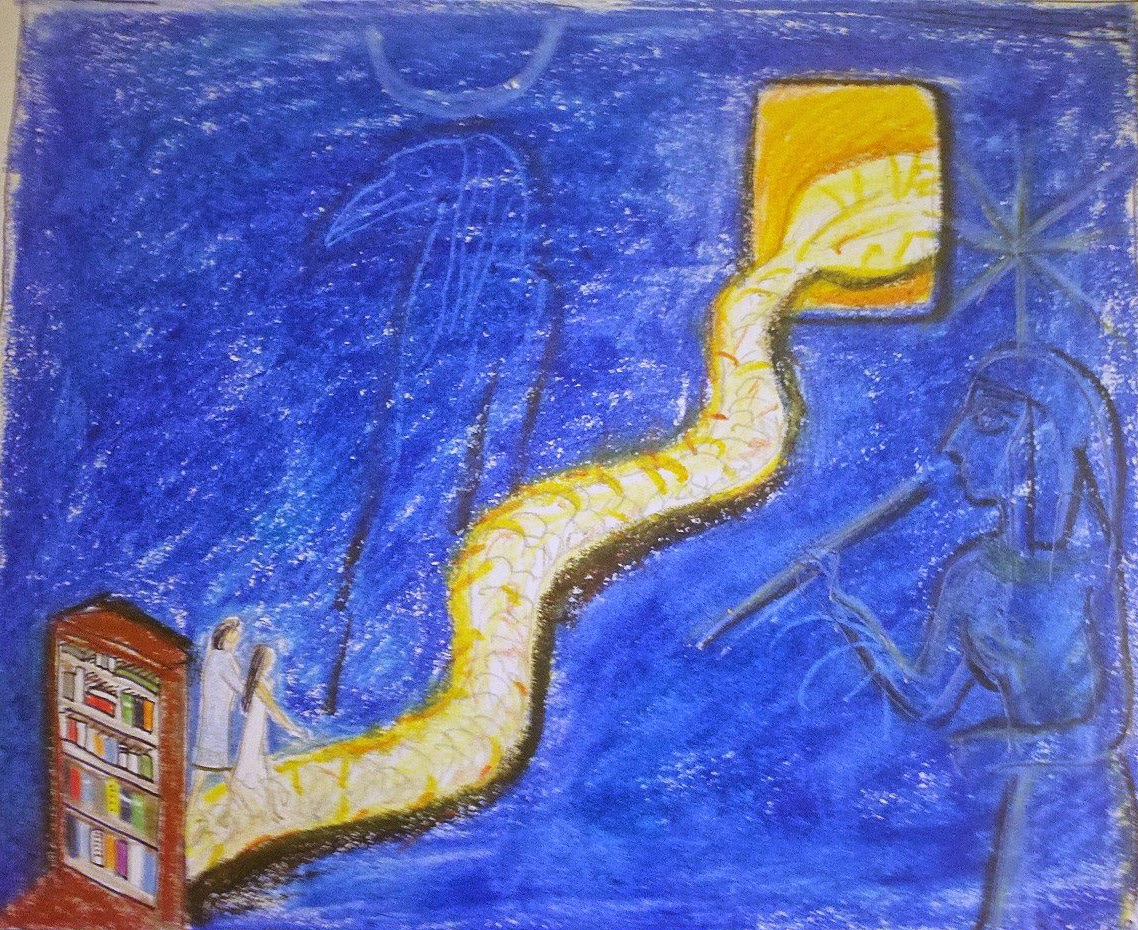 Thoth-Tehuti is well known, as Egypt's god of writing and measurement associated with the Moon and in some ancient theologies as a creator deity who brings things into existence by naming them. I have led many group journeys into a magic library whose presiding figure casts the shadow of an ibis-headed biped. Less well known than Thoth is his sister Seshat, who has her own magic library.
A friend's dream opened the way for a shared journey in which we traveled together into her realm. The experience is a lively example of what Yeats called "mutual visioning". It is also an example of the practice I call"dream archaeology", in which we use the techniques of Active Dreaming - especially conscious and interactive dream travel - to gain authentic first-hand knowledge of ancient traditions, and then use the tools of scholarship and science to verify our findings.
My friend Carol, who is also a gifted dream teacher,  was eager to share a powerful dream with me. In the dream, a young woman leads her from one of my workshops along a passage into a library where she meets the Egyptian goddess Seshat, and is shown shelves filled with books of different times and a crystal window that opens onto both the past and onto many "drawing-board futures" – futures than have not yet been fixed.
In the dream, the portal is a dark bookcase Carol finds beside her in a circle in which I am sitting at the north; a book by the Egyptologist Wallis Budge is on a lower shelf. As she bends down to inspect the book, she feels a hand on her right wrist. A young woman tugs at her, drawing her into a long hallway. The floor, walls and ceiling are light ivory. The young woman talks to Carol about meeting someone she has wanted to meet.
Carol struggles with the name. She gets something like "Shasta" and thinks, No, that’s a brand of soda. The young woman smiles at Carol’s embarrassment. Carol looks down and notices she is now wearing a lovely long white dress. They go through a curtain of feathered wings, into a library. Carol knows this is the library of Sesha, or Seshet, or Seshat….she’s getting closer to that name now.
The owner of the library appears and greets Carol as if she knows her. "I hope you will be able to remember. I precede Mary."
"You know Mary?" Carol is stunned.
"Of course. We are connected. I know many. You must remember."
She leads Carol to the windows of the library. Carol sees geometric designs of cities on many boards. Some are surreal or futuristic, some ancient; some are "on the drawing board" and may or may not be constructed. Carol feels she could go through many different windows, to different cities. On the library shelves are artifacts: a star, writing instruments, engravings on stone that include a carving of an ibis. There are papyrus scrolls that appear to be new. There are beautiful flowers on Egyptian vases.

I was intrigued and excited by this dream. Carol and I made a date to meet privately and travel together back into this dreamspace, with the aid of shamanic drumming, to learn more.
As I drummed for us, I found myself moving deep into Carol's dreamscape. I approached the bookcase and found Wallis Budge. He showed me praise names of Seshat, transcribed in his books, that we could use as an invocation that would open the gate to her library.
The passage from the bookcase to the library of Seshat was on the back of an immense cobra. Its scales gleamed golden, with crimson flashes, against a dark void. As we traveled together, I noticed that Carol did not realize what she was walking on, which may have been a blessing since - while Carol is an intrepid dream traveler - the idea of walking on a giant snake could be distracting. She walked a few paces ahead of me, on the cobra’s flattened head through an open archway, high above, into Seshat’s library.
In the library, I was drawn at once to a window set in a deep niche. The glass appeared to be a crystal several inches thick. Through the window, I looked into a sea world. Mer-people live here. They ride larger sea creatures for faster transportation. Their cities are underwater. This may be another vision of Atlantis, the Moist Land.
I turn to the goddess. Her eyes are lapis blue, purplish blue around the pupils. Her headdress is a seven-pointed star.She tells me she is the original Stella Maris, the Star of the Sea. This is a fundamental sense in which she precedes Mary (who was given the borrowed praise name). From her library, I am able to view the original of the XVII Tarot trump, the Star. The Book of Seshat is concealed – and revealed – through this image.
I sense the presence of Thoth/Tehuti. I am told he presides over a parallel library. I want to know their relationship and their story. Did they come to this Earth together? My sense is they are truly "extra-terrestrial gods". They are brother and sister. Thoth came first, at a time when Earth was a very savage and primal environment, the time when baboons were wiser and stronger than the ancestors of homo sapiens. He established a forward base on the Moon for his work in transferring language to humans and effecting the link with higher consciousness. Seshat came later, she instructs me. She descended directly to Earth, and therefore may preserve a more direct connection with the Star from which both of them come.

At the end of the journey, Carol and I shared our travelogues and found that our reports were very similar. Carol had experienced walking a path of golden light, but had not - as I noticed - realized that she was on the back of the giant cobra. By traveling into the multiverse in this way, as partners or in groups, we can achieve objective confirmation of our experiences of the deeper reality, and advance the work of reopening living connections to the past that matters, and of mapping the imaginal realms.

I am posting this tonight because of a wonderful journey report shared in my class for The Shift Network in which a woman received healing and guidance from Seshat and resolved to honor the encounter by "shamanic decorating" including the special arrangement of a library of colors as well as books.
Posted by Robert Moss at 9:11 PM