What the Dickens is déjà vécu ? 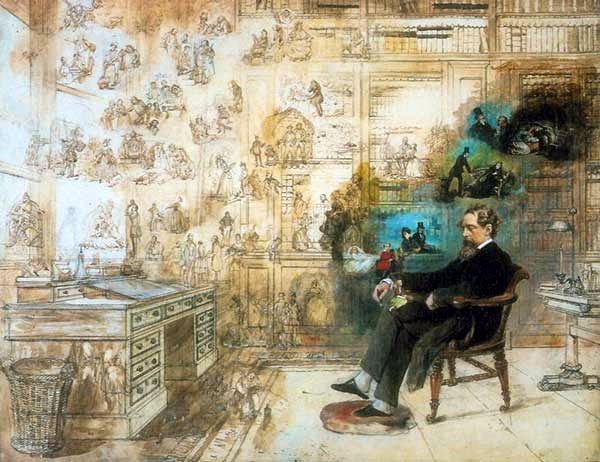 We have all some experience of a feeling, that comes over us occasionally, of what we are saying and doing having been said and done before, in a remote time - of our having been surrounded, dim ages ago, by the same faces, objects, and circumstances - of our knowing perfectly what will be said next, as if we suddenly remembered it! I never had this mysterious impression more strongly in my life, than before he uttered those words.

This is a very exact description of the experience of déjà vu, though the writer does not use that term. The source is David Copperfield. The author, the prodigious Charles Dickens, left us an even more vivid account of the phenomenon of déjà vu in his account of an incident on the road to Ferrara, in his travel book Pictures from Italy:

At sunset, when I was walking on alone, while the horses rested, I arrived upon a little scene which, by one of those singular mental operations of which we are all conscious, seemed perfectly familiar to me, and which I see distinctly now. There was not much in it. In the blood red light, there was a mournful sheet of water, just stirred by the evening wind; upon its margin a few trees. In the foreground [of a view of Ferrara] was a group of silent peasant girls leaning over the parapet of a little bridge, looking now up at the sky, now down into the water. In the distance a deep dell; the shadow of approaching night on everything. If I had been murdered there in some former life I could not have seemed to remember the place more thoroughly or with more emphatic chilling of the blood; and the real remembrance of it acquired in that minute is so strengthened by the imaginary recollection, that I can hardly think I could forget it.

"There was not much in it," Dickens says before sketching his word-picture. Yet we feel at once that this disclaimer is not to be trusted. The light over the scene is "blood red". What could be an idyllic scene of girls leaning over the parapet of a little bridge, as evening falls, fills the observer not only with the certainty that he has seen this before but with a crawling dread. If he had been murdered here in a past life, he insists, he could not have remembered the place "more thoroughly or with more emphatic chilling of the blood."
Dickens clearly felt that he knew that scene near Ferrara because he had been there in a former life, perhaps a life than ended violently at that very place. A generic term we use for this kind of experience today is déjà vu. Dickens did not have that term. He was writing in 1846; déjà vu was first used to describe this phenomenon by a French professor in 1876, and only brought firmly into the English language in 1895.
In any event, déjà vu ("already seen") may be too generic for the Dickens experience. This is an occasion where we want to reach for a different French term, déjà vécu. It literally means "already lived", and it speaks to the sense of recognizing a scene that you feel sure you have lived, fully and completely, in a previous time. This recognition generally comes with strong emotion, though it may be bittersweet nostalgia, or a sudden afflux of joy, even exultation, rather than Dickens' "chilling of the blood".
You walked that cliff, you kissed on that bridge, you fought on that field of battle. You are sure of it. Maybe specific memories begin to stir. Are they buried memories of an episode from earlier in your present life? Are they ancestral memories, of members of your lineage or your spiritual kin who loved and struggled in the place you are at? Are they memories of a previous incarnation of your own spirit? Or are they false memories, hallucinations brought on by travel fatigue or an over-excitable temperament, or even inserted into your mind by some psychic deceiver?
These are questions that all of us who experience a strong sense of déjà vécu are going to want to explore as best we can. There is a legion of reductionists - some armed with some neuroscience, some recycling Freud - that will tell us that our impressions are the effect of an imbalance in brain functioning or the bubbling up of repressed fantasies. But we can take heart from the knowledge that the sense of déjà vécu has a highly distinguished literary and historical pedigree.

There is a nice account of a "past" life of Dreamhealer or Adam Mcleod, referring to his medical experience in the "present" life.
Several years ago he was invited as one of healers to First Nations International Healing and Medicines Gathering in Saskatchewan.
The whole week during the gathering, there was a long line in front of a particular wigwam. He was curious about that man inside but he didn´t succeed even in glancing the shaman because he never left his wigwam and decided to eat and sleep there as well.
After the final ceremony, while packing his luggage, he was after all invited to meet the shaman by his assistant. Both men recognized at once that they knew each other from the former life in tribe. The shaman remembered that Adam´s shoulder was wounded by an arrow and he asked about it telepatically. Dreamhealer rolled up his sleeve and showed him the scar on his right shoulder. He injured his elbow as a 13-year- old boy during the bus accident and as a result had to undergo a surgery.
He used this story as an example of certain tendencies we can carry from "past" lives. Not as a must, rather as a probability.
I am more cautious in reincarnation theories, but when it explains and heals some present traumas, it is bound to be a good thing, whether it is strictly true or not :-).

Sounds like it scared the Dickens out of him.