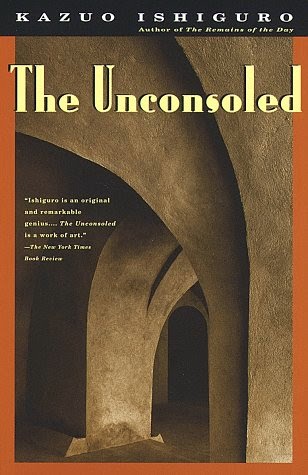 In a writing life, the great moments are when you are dreaming on paper (or on a keyboard). Words stream almost effortlessly from springs that are not accessible in lesser states of consciousness. Clock time no longer rules. In an expansive now-time, more is possible in minutes than might otherwise come in days. Improbable connections are made and prove to be exactly right.
This is conscious dreaming. You straddle the worlds. You are the shaper, not merely the amanuensis, for the images bubbling up from those fresh springs.
If you want the experience of dreaming on paper as a reader, there is no better book to open than Kazuo Ishiguro's marvelous novel The Unconsoled. The novel unfolds exactly in the manner of a dream, with a dream's elasticity of time and space and sudden shifts in perspective and identification of self and others.
The opening is masterful. A world-famous pianist, Ryder, arrives in an unidentified Central European city on a mission he can't remember. He is deposited at a grand hotel that at first seems eerily deserted. Then an elderly porter appears as his guide and delivers an impossibly long and eccentric monologue during an elevator ride in which he holds heavy suitcases in midair because of a bizarre work ethic. Ryder drifts off to sleep in a room that morphs into his childhood bedroom, complete with plastic soldiers deployed on the floor.
In the days that unfold, his life is dictated by other people's urgencies. Their needs and identities are very unstable. The porter wants him to go to a cafe in the Old City to meet his daughter. When the porter's daughter - at first a complete stranger - reveals that she is Ryder's wife, Ryder accepts that it must be so. On another hurried errand, Ryder fears facing a woman ticket collector without a ticket - then recognizes her as a girl he knew in England when he was nine. This woman he hasn't seen since she was nine now proceeds to rebuke him for failing to show up for dinner the night before. Instead of denying knowledge of the dinner, he accepts the rebuke and agrees to meet her at the end of the day so she can show him off to her friends. When he does so, after a string of hectic digressions, the friends gabble on about the famous Mr Ryder without recognizing that he is present - and he can't find the words to announe himself.
The geography of the unnamed city is oneiric. Ryder is sent to a practice room to play the piano and it looks like a combination of a laundry and a public restroom. He travels for miles and miles through forests to a meeting far from the city, then finds that by stepping through a door he is back inside the hotel or restaurant from which he departed. The shifts of scene and perspective are also the stuff of dreams. Someone reminds you of someone else, and transforms into that other person.
We learn that all the febrile excitement in this music-mad city centers on a plot to replace the conductor of the orchestra with a man who has been a falling-down drunk for years. The grand concert intended to bring this plan to fruition - where the grand finale is to be a speech and piano solo by Ryder - collapses in fantastic chaos, as dawn is breaking. Ryder never gives the performance for which he came to the city. Nor does he even get the breakfast that is now served at the concert hall, which has turned into the hotel. We last see him on a tram where an electrician is embarking on a monologue reminiscent of that of the hotel porter. By oneiric logic, Ryder finds the bacon and croissants he craves on board the tram, and we are left with the scene of him eating them, on a tram that goes round and round, like a recurring dream, the kind in which we never become conscious that we could make different choices.

Andrew Lang, a great Scottish explorer of dreams (author of Dreams and Ghosts as well as editor of the beloved Color Books of fairy stories) said that the best dream-inspired stories are those that never mention dreams. Kazuo Ishiguro has managed to deliver a sustained dream narrative that runs for 535 pages and mentions dreams on just one page (page 416) where a minor character, the hotel manager's wife, confesses that she feels a "tenderness" in dreams she cannot express outside them.
Readers may notice Ishiguro's play on Kafkaesque themes and tropes in The Castle. What excites me about The Unconsoled is the direct transfer of the geography and logic of dreaming to a long narrative form. Apart from some unavoidable interruptions, I was unable to put this book down until I finished it, two days after I picked it up at the magic bookstore on the corner of the street. As I gobbled the pages, I felt something releasing - like a spring - inside my own creative imagination.
Now I recall that more than a decade ago, an earlier novel by the same author had a similar effect on me. That was An Artist of the Floating World, a beautiful exploration of the nature of self-forgiveness, and the need for it. Reading that novel - very different from The Unconsoled - at exactly the right moment helped trigger a series of imaginal encounters and discoveries from which my book Dreamgates was born.
I don't know whether Kazuo Ishiguro keeps a dream journal or how much he borrows from his personal dreams. But he certainly knows the geography of dreams, and dreams richly on paper.

I don´t know if Ishiguro ever talked about connections between his writing amd dreaming, probably yes, but I know that before he set to writing seriously, he was employed as a social worker for homeless people for one year, which was extremely exhausting. One option to change his situation was to do some other university degree. He heard about a creative writing course in East Anglia and went for it. He was also pleased with the fact he didn´t have to work too diligently because all what they required was to produce thirty pages of fiction at the end of the year:-).
As he claims, he had two terrific teachers who used a "method" of simulating conditions in which professional writers usually create. Very few distractions and very empty space. Just you and a piece of paper. Of course, it doesn´t work for people who are not destined to pen work, but for him it was a perfect beginning.
I didn´t read The Unconsoled but Never Let Me Go is more than just a successful attempt to open people´s eyes to reality we are living now. In some way totally nightmarish, beating down all healthy human instincts to be human to people we deal with, it´s a kind of shock therapy. Maybe it´s not too late for us when excellent story-tellers like Ishiguro are inspired to make an artform from gloomiest predictions about direction in which we are by nad large moving in western societies.