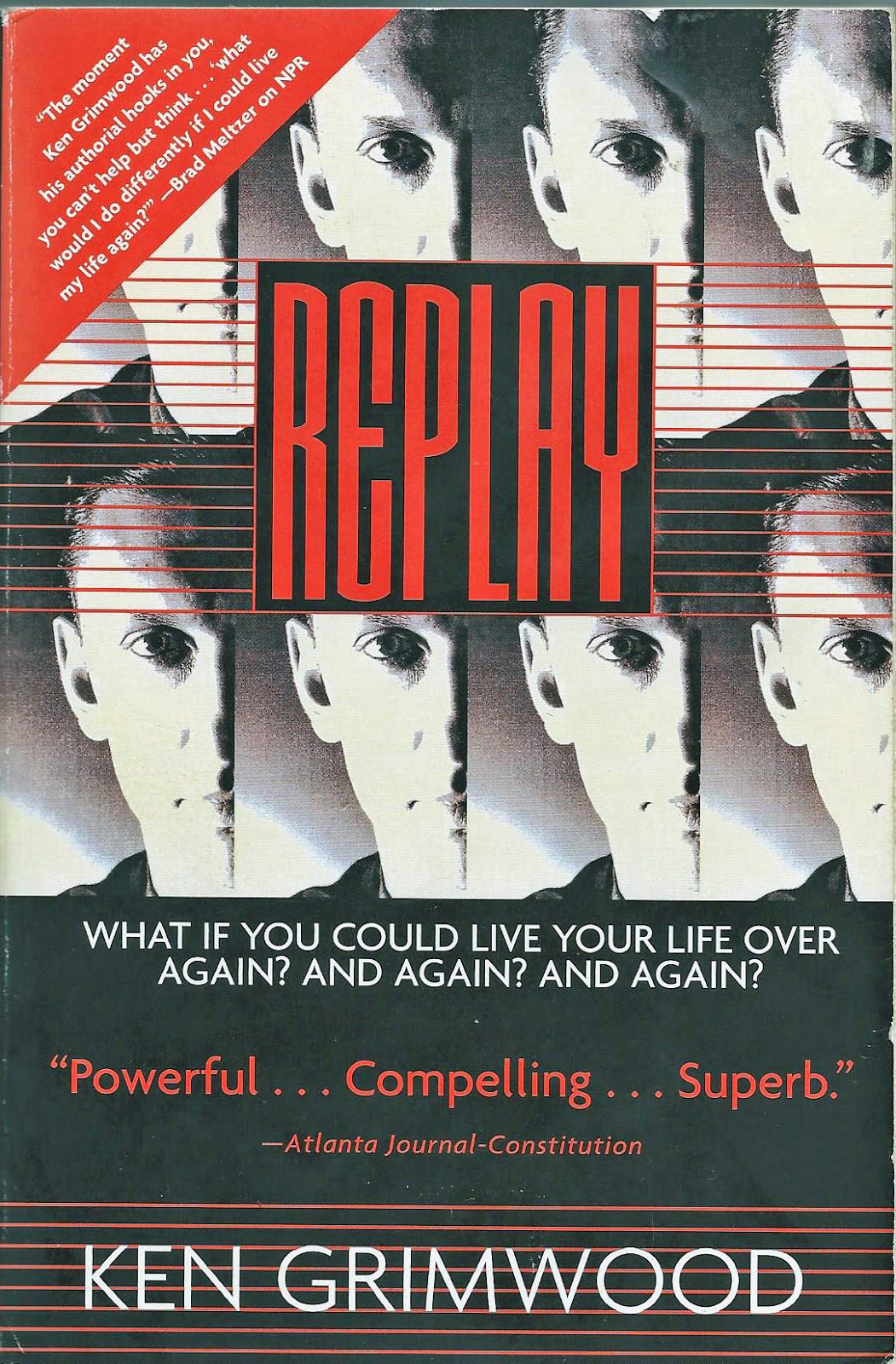 I just devoured a superior novel about time loops, Replay, by Ken Grimwood. Don’t know how I missed this when it was published in 1986.

[SPOILER ALERT: some plot twists in Replay are disclosed in the next paragraphs.]

Jeff Winston, a radio journalist stuck in a lifeless marriage dies of a heart attack at 43. He finds himself in the body and life of his 18-year-old self in a college dorm, with full memory of the twenty-five years he lived in the freshman’s future. He remembers the horse that won the Kentucky Derby that year – Chateaugay – and makes a killing by betting on it at 11:1. Then he bets his winnings on the Dodgers to shut out the Yankees in all four games of the World Series, at 100:1. A precocious multi-millionaire, he drops out of school and founds a financial empire, investing based on his memories of startups and economic trends. And his life becomes more and more hollow, after he marries a suitable, sterile wife from money – until he reaches 43 and dies again.
Once again, he’s back in the 18-year-old body, with slight time displacement: he’s now on a movie date with his college girlfriend. He makes different choices, has a happy marriage, cashes in on future knowledge more cautiously – then dies again at 43, this time with the anguish of losing the kids he had.
Next, he’s 18 again, once more with some time displacement. This happens again and again. He places different bets, makes different choices, ends up with - or without - different women. Sometimes he tries to stone himself out of awareness of what is going on. Sometimes he tries to save the world, with mixed results.
Every time he is hurled back to a younger self, he retains full memory of what will happen over the years up to his fatal heart attack, and of the choices he made in his previous time loops. Though the evocation of America in the 1960s and 1970s is brilliant, this repetition could get tedious until there is a major game changer. Jeff meets another "replayer", someone who is experiencing the same time loops. This happens when he is persuaded to go see a movie called Starsea, a box office hit that he realizes could not have been made except by someone who was familiar with movies and cinematic techniques that are still in the future (Star Wars, 2001 etc). He seeks out the writer/producer, Pamela Phillips, and finds his time mate.
So now the plot thickens as the two replayers fall in love and agree to find each other again in the next time loop, when she’ll be 14 when he becomes 18 again….and then in the time loop after that...until something happens I won't reveal here.
One of the things they notice is that the parallel lives they are living, in this linear sequence, aren't so much better or worse than each other as simply...different.
The loopers seek a scientific model of understanding for what is happening to them, and never get one, which may be a good thing for the reader. Dreams are not mentioned in the novel, and I don't know whether Ken Grimwood (who died of a heart attack at 59) was influenced by his own dreams.
Yet active dreamers may find many familiar elements in this fictional scenario. In dreams, we sometimes find ourselves in scenes from our younger lives, back in the old place, with the old crowd, doing the old things. There may be anomalies. The "old place" is slightly different. The main players in our lives are shifting places. We are striking out in somewhat different directions than we remember.
It is my impression that in dreams of this kind, we are sometimes walking paths not taken on our current timeline. We are entering the experience of parallel selves as they make different choices in what is "past" time for us but current time for them. We may follow these trails into what is "future" for us but is again current time for these other selves.
When I took a nap in the midst of reading Replay, I found myself about thirty years younger. In the dream, I discovered a box containing power objects belonging to a notorious English black magician of the early twentieth century. I decided I needed to bury these so they could never be used again, and set off to an Egyptian museum - and then an archaeological site - to accomplish this. Despite sinister elements in the dream, I woke happy and exultant, relishing the adventure I had just had.
The dream (of which this is only a bald summary) could be approached from many angles, but the one that interests me here is the possibility that I stepped into a life my parallel self is leading thirty years in my past, which is right now for him. Time moves differently in different realities.
Maybe this is less like "replay" than like new play. It is certainly deep play.