Brushes with the red fox 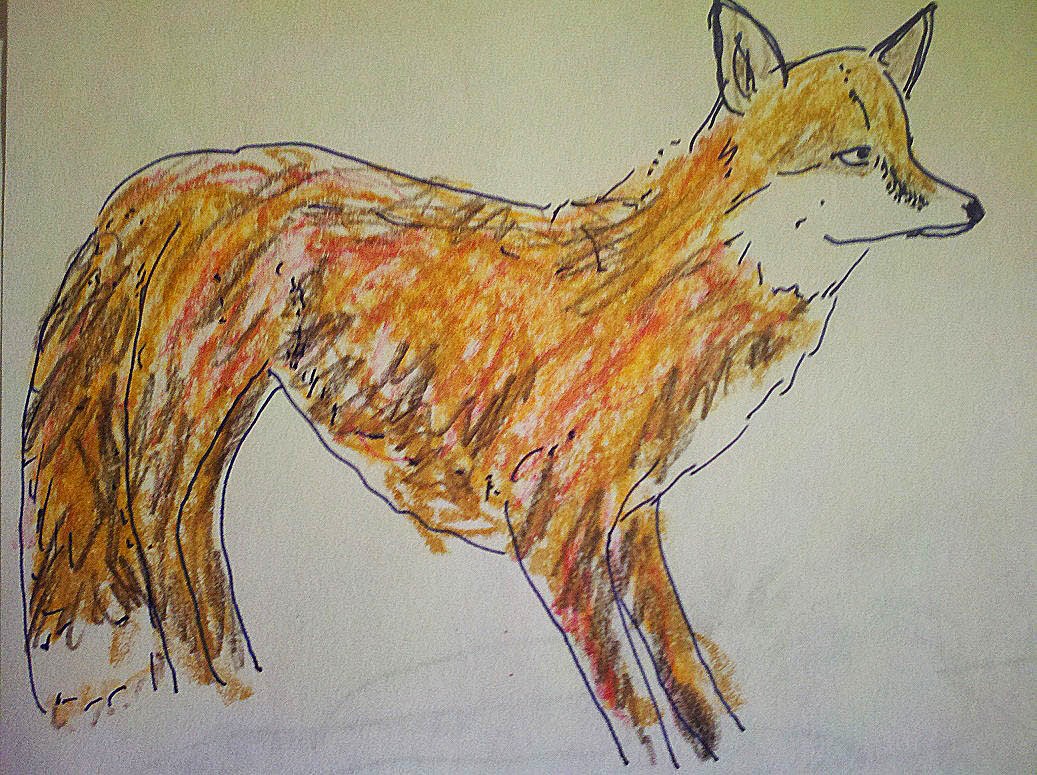 When the fox is around, the message for me is always Pay attention. The fox is a liminal animal, and its appearances suggest that we are entering an edgy time. I feel a Trickster energy in play when the fox is about.
Once, when I was talking about the fox in front of a workshop circle in the Big House at Esalen, a fox popped up behind me, clearly visible to the group through the window. When they started laughing and pointing, I turned around. The fox promptly disappeared. This scene was repeated several times. That fox seemed to enjoy performing for the group while playing hide-and-seek with me. I became quite careful about monitoring the shifting energies of the group that week.
I pay special attention to the comings and goings of the red fox. In my personal mythology, the red fox connects me to ancestral dramas. In shamanic lucid dreaming, I once tracked a red fox, glimpsed in dreams, to a scene in ancient Britain involving a tragic love affair and a druid sacrifice and the issues these raised in my current life.
The oldest evidence we have of shamanism in Europe is the remains of a woman of power who was buried inside a crypt of mammoth bones in the wooded Pavlov hills of what is now the Czech Republic. She was interred 30,000 years ago. Her body was painted red, and in her hand was placed the body of a fox,apparently her spirit ally.
Similar clues to the importance of the fox in early magic come from other parts of Europe. The druid prince dug out of the Lindow Moss in northern England, preserved by the chemical stew of the bog, was found to be wearing a collar of red fox fur.
As a power animal, fox brings many gifts, of craft and cunning and camouflage. Fox knows when to hide and when to hunt, and how to wait in concealment for the right opportunity.
There are clues in language to the qualities associated with the fox. To "outfox" someone is to outsmart them. "Foxy" can mean crafty, or sexy, or simply red-haired. "Shenanigan" - an act of mischief - is derived from the old Irish sionnachuighim, meaning "play the fox".The Trickster character of the fox is central to countless folk tales, fables, and children's stories.
East Asian cultures are uneasy about the fox, and especially about foxy women. In traditional Japanese and Chinese culture, possession by a fox spirit is held to account for many problems, especially in women. In folk tales there are women who are foxes, putting on human disguise to seduce men.
Here are some verses from a long poem I wrote from a hundred encounters with the red fox, on the roads of two worlds:

From Brushes with the Red Fox

You live on the edges of my life
at the margin of the tame land and the wild
and your appearances are always edgy for me.

You know when to hide and when to hunt.
Men chase you on horseback, with dogs,
yet turn chicken when you turn up unannounced.

You are tricky. I doubt I'll ever be at ease with you.
But you are a determined messenger
and a necessary link to old and sacred things

You call women I care for to reclaim lost soul
and become foxy girls, immune to glass ceilings,
setting their own boundaries, living unbounded life.

- from my collection Here, Everything Is Dreaming

It was probably Verdi who made one of the best laughs out of the foxy energy in his comical opera Falstaff. It´s also his last operatic work, written on the threshold of eighty, so the final laughter composed in a fugue is sometimes regarded as his musical testimony.
In Falstaff, women win and men lose, though men believe, at least sir John Falstaff, that his charm is absolutely irresistible for all ladies so he doesn´t hesitate to write two identical love letters and there starts the whole fun...
But is is the final fugue which holds the key to the ambiguity of life. The performers have just two lines to sing. The first one is: "Everything in the world is a joke." and then follows the second and more serious: "We are all deceived."("Tuti gabbati"). When Falstaff slowly whispers the latter, just for a moment, the orchestra falls silent and then again the ocean of laughter rises up and continues seemingly forever.
It is easy to overhear in all merriment on the stage the words "tuti gabbati" but they are pronounced distinctly and for one invisible second they stop heart from beating. Never mind with Verdi, since his genius can make even a cunning, foxy energy a part of the divine plan. If I am not mistaken, buddhists called it turning pain into the path.

Interesting ... I'm listening to some excerpts of Mendelssohn's music to Shakespeare's "Midsummer Night's Dream," which features a hunt for foxes, the morning the lovers are found.

Last night I had a dream of a Robert character in red hair. The color was very much the color and feel of red fox. I had stepped into a dream I could not orient to very well. As I was trying to discern what was going on around me, what became clear first was this Robert character. He was lighter and had more solid form then the others. I am not sure what he was doing with these "somethings?" , spirits?. When he quickly walked past me he look straight at me and said to go to this room in the level above. It was strange because he shifted away from the style of the dream when he said this. Next I was in the hypnogogic state working out a heart solution. My feelings when I woke up was that of a lighter heart that had solved a relationship dilemma.

Edgy is a good word for fox for me also. Fox is a welcome guide. I have had many encounters with fox in my night dreams also and in the day life. I have had two other dreams about red heads in the last two weeks and a marvelous dream around fairy folk that I titled, Visiting the Mountain of my Mother. I had a wonderful discussion about skinning fox fur with a locksmith named Adam last week. We both found a red fox dead along side the road. My dad was a hunter and taught me to not waste life. I find fox beautiful. It is also a guide for me that I associate sometimes with my Scotch-Irish ancestry.

I have an idea for a creative space here in the Dandenong Ranges, called Liminal, using creativity, bodywork, intellectual discussion to help us feel more at home in our own bodies. If it ever got started, and you ever came to Australia, you are one of the people I can envisage running a workshop there, if you so desired.

I read this post this morning, lying in bed with a lurgy. Since then, I have seen two different photos of foxes. One was about a man who came upon a fox who had been hit by a car, and as the fox was fluttering between life and death and there was nothing he could do, the man sat with the fox and comforted him, hoping that somehow it would help. The fox died. Then eight hours later, the man went past the same spot, and the fox was miraculously alive. The man took him to the vet.

The Trickster has been lurking around me all week. He continues to do so :)

I was returning because edgy is not the only word I would use for fox. I think the word adapt fits my recent experiences. My sister just sent me a Facebook post about fox that has me seeing I need to jump to it and adapt to this new road block quickly. Last night I got angry in a dream where someone was telling me I need to get out of this space. When I have this particular angry reaction it tells me I need to break through my resistance and surrender is key to quick action. If this lovely animal can cunnigly adapt to diverse and adverse climates all over the world(s), surely I jump to it and quickly move forward.