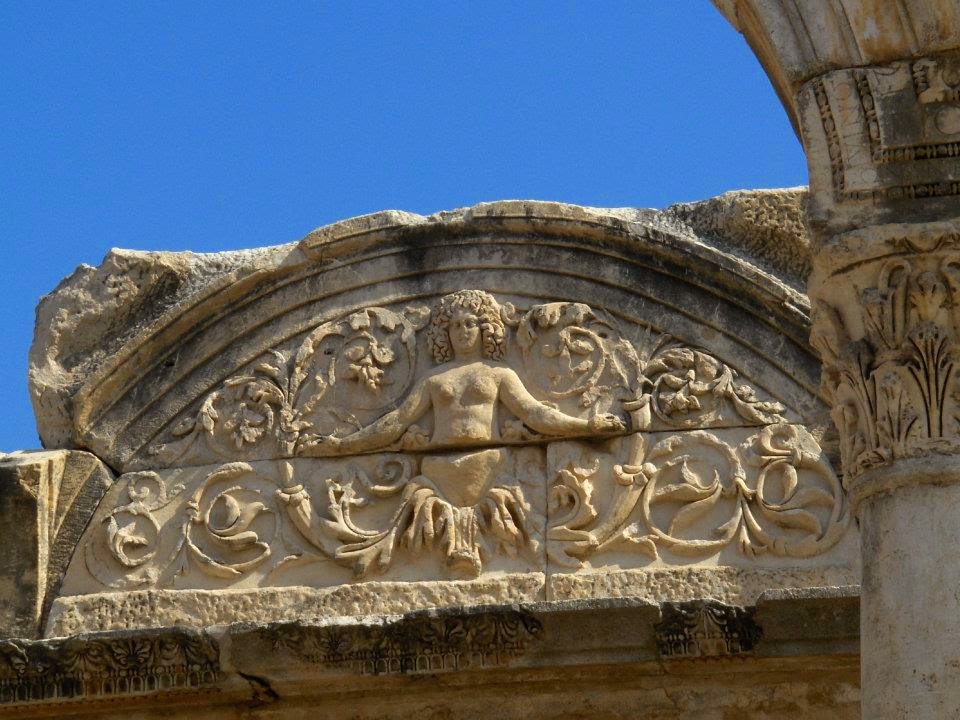 
1. All quotations from Artemidorus are from, Oneirocritica: The Interpretation of Dreams. Trans. Robert J. White. : Original Books, 1990.
2. Christine Walde, “Dream Interpretation in a Prosperous Age? Artemidorus, the Greek Interpreter of Dreams” in David Shulman and Guy G. Stroumsa (eds) Dream Cultures: Explorations in the Comparative History of Dreaming. : Press, 1999, pp. 126, 128.

This article is adapted from The Secret History of Dreaming by Robert Moss. Published by New World Library. All rights reserved.
Photo: Medusa at Ephesus (c) Robert Moss
Posted by Robert Moss at 8:39 AM

A few days after returning from a visit with family, I dreamed my mother cooked some steak. I wondered why I was dreaming about something that had already happened. She then sent me an email saying she had cooked steak that day. lol. Is my life that boring or is a steak more than a steak?

I don't think it is boring to have such clear and simple confirmation of dream clairvoyance or telepathy. To get to the meat of the subject, I would say to myself: If I can have an accurate psychic dream of something as small as this, what else can I dream? I would also think about many reasons why I might want to be in active contact with my mother at this point in our lives.

When the stakes are high, it's time to get cooking!

Thanks Robert, yes, I am watching closely from 3000 miles away. What is at stake is her declining health.

It's a shame only one of his books survived. Who knows what kind of wisdom and experiences he could have shared in his other books.
A funny concidence. Last week someone told me she had a dream of a snake which was wrapped around her arm. And she wondered what it could mean.
I told her (quoting from your book: conscious dreaming) that I could not tell her what it could mean. Because a dream and the elements in the dream have a personal meaning. And the meaning of the dream is in the dream landscape itself.

Quite right, James. Yet we can offer feedback by saying "if it were my dream" and then offering our own associations without imposing them on the dreamer. Had I been asked about this dream, I might have said, "If it were my dream, I would reflect that Asklepios, the Greek god of dream healing, is often depicted with a snake wrapped around his arm. So I would wonder whether the snake here signifies a power of healing for myself or - through me - for others."

In one of your books you describe a healing ritual wherein you prepare for entering the temple in Ephesus and spend a night there dreaming.

I prepared for that ritual, preparing my mind, asking what I wanted to deal with, etc. While my request was very general, I did want to free myself of old memories that were negative and of no use.

I was amazed at the dream that came forth that night bringing forgiveness on both sides of the dream. For me, the dreamer and the persons that appeared in the dream. This dream brought up old wounds, grievences to forgiveness and a lightness of the heart.

Naomi, it sounds like you discovered - as did the ancient pilgrims who journeyed to the temples of dream healing associated with Asklepios - the depth of healing and guidance that is available to us from a deeper source when we ask in the right way. I have written about the Asklepian experience of dream healing in several of my books, including DREAMGATES and THE SECRET HISTORY OF DREAMING. As you discovered, this works! Thanks for sharing.

Hi Robert, thanks for your response. My friend and I, along with a few others, are practicing to get lucid dreams. She told me in her dream the snake was around her arm en started to squeeze her arm. I was wondering if the snake wanted to help her in her dream to get lucid. By squeezing her arm, making the dream a little more uncomfortable, making her aware she was dreaming.

But yes the image of Asklepios with a snake wrapped around his arm has a strong resemblance. I'm going to ask her how she feels about that image.