When Jung made Freud swoon 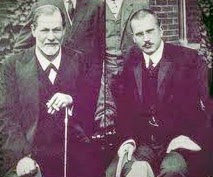 The psychic field between Freud and Jung was always highly charged, producing both paranormal and all-too-human phenomena. It was never more charged, perhaps than when Egyptian elements were also at play. Here is the story of how Freud fainted twice in public during conversations with Jung that involved Egyptian themes - mummification and the psychology of Akhenaten.


The young Jung takes Freud and Sandor Ferenczi, who will sail with them to New York, to visit Bremen cathedral. The lead cellar and crypt are a grisly chamber of curiosities. Centuries earlier, a workman fell from the roof and when his body was discovered years later in the cellar, it had been preserved like a mummy. Corpses of birds were in the same condition. It became a strange fashion for wealthy burghers of Bremen to have themselves buried in the lead cellar, wishing for the same effect.    After inspecting the mummies of Bremen, the three psychologists lunched at one of the best restaurants in the city. Jung compared the Bremen mummies to the bodies found in peat bogs in northern Europe that were similarly preserved. Wine flowed. Freud became noticeably tetchy. Finally he yelled at Jung, repeatedly, "Why do you keep talking about these corpses?" Then he fainted at the table. Jung picked him up and carried him to another room.


Freud later told Jung that "all this chatter about corpses" meant that Jung harbored "death wishes" towards him. The incident is still very curious indeed, since Freud was generally an enthusiast for mummies. He took pains to acquire painted Egyptian mummy bandages and mummy cases for his immense private collection of ancient sacred art, much of which came (via dealers and patrons) from tomb robbers.

Freud and Jung are at a conference. Tension between them has been running high. Freud resents the younger man's entry into the field of the psychology of religion, where he would like to reign supreme. Jung has been less and less inclined to yield authority to Freud as the father figure he formerly declared him to be. He is steadily chipping away at Freud's most important theories.
They leave the conference crowd to take a long walk. Maybe their relationship can be repaired. It started out with such a deep sense of affinity that on their first meeting, they talked for thirteen hours. Until recently, Freud regarded Jung as his heir and successor. During the walk, Jung apologizes to Freud for various "mistakes" that hurt his mentor's feelings. They go in to lunch apparently reconciled.
The conferees discuss a paper by Karl Abraham on Akhenaten, the pharaoh who tried to abolish the worship of the many gods of Egypt in favor of a single, abstract God represented by the solar disk and called Aten. Abraham's argument, very much in line with Freud's way of thinking, proposed that it was Akhenaten's "father complex" that gave rise to his monotheism. He founded a religion in order to bring down his father, the luxury-loving polytheist Amenophis III. He took pleasure in effacing the images of the god Amon from inscriptions because this was part of his father's name.
This approach profoundly dissatisfied Jung, who had recently written in Symbols of Transformation that Akhenaten was "a profoundly religious person whose acts could not be explained by personal resistance to his father." Freud is deeply disturbed by the gathering debate about a pharaoh and the origins of religion. Suddenly he swoons at the table, in front of all the analysts. Once again, Jung catches him up in his arms and carried him to a private space to recover.
Perhaps there was an element of presentiment in Freud's swoon at the Munich conference. His last major work, the brilliant but deeply flawed Moses and Monotheism, was an attempt to attribute the rise of monotheism to Akhenaten, and analyze the founder. This book caused him immense frustration and self-doubt and he took to referring to it as his "historical novel."
Both Freud and Jung knew that fainting can be a defensive mechanism. Though I do not know of any record of Jung swooning in front of others as a man, he did this as a boy in order to get out of going to school in a period when he was being bullied.
Freud's fainting acts bring into clear focus the tremendous energy generated between the aging master and the increasingly reluctant acolyte. The emotional and psychic field between them was always highly charged. This came to a head in a different way on the night when they were discussing the occult in Freud's study. Freud kept rejecting Jung's examples of paranormal phenomena, indicating that he regarded them as mere "spookery". Jung tried to withhold an angry response. As he held himself in, he felt odd sensations in his body, "as if my diaphragm were made of iron and becoming red hot". The next moment, there was the sound of a loud crash from Freud's bookcase. Freud jumped up to examine it. Jung told him to wait a moment, there would be a second crash. And there was.
Jung suggested that the crashes were the work of a poltergeist. Freud suspected that Jung may have tried to conjure such a force to prove his theories of the occult. After Jung left, he tried to summon the poltergeist himself, without success.

It is hard to overstate the importance of the Egyptian current in the fainting spells, especially when conscious that Egyptian images were dominant in Freud's vast collection of "ancient and grubby gods" (as he once called them). He kept a bronze head of Osiris on his desk, and rubbed it from time to time. He told H.D. that he called it the Answerer, because it gave him answers, even lacking the jeweled eyes that tomb robbers had removed from the sockets.


Top photo. Looks odd, because it is. Someone (not I) doctored a famous group shot of Freud and Jung  with colleagues at Clark university in 1909. The photo-shopping has removed not only the three men (including Sandor Ferenczi) in the second row, but pioneer American psychologist Stanley Hall, seated between Freud and Jung in the actual group photo. I thought the photo's strangeness suited my subject here.

"Perhaps there was an element of presentment in Freud's swoon..." I like this word presentment...anticipatory indignation?
Such a strange pair, Freud & Jung. Maybe what we call genius, the kind that influences the trajectory of human development, is nothing more than the quality of living out one's strangeness, no matter where it leads. Recent readings about an autistic savant and powerful introverts suggest the same.

I believe that the father-son relationship has always been extremely important for life of individuals and the whole society as well. Loving and strong fathers cultivate similar qualities in their sons (and in daughters) and give them confidence to realize their potential inside and outside as well.
Richard Rohr in one of his books mentions the relationship between St. Francis and his father. It was wounded relationship and Francis with his own intuition tried to heal it in a rather unusual and humble way (at least for me).
Always, when he went out, he asked a begger from the street to accompany him. He explained to him that when his father comes and tells him off, he will listen to it with one ear. In that moment, he would plead with the beggar to stand at his other side and whisper to his other ear: "Francis, you are my beloved son, you are the son of Heaven and the son of God." He wanted to have it repeated again and again until he could believe it. By Rohr it was his way to protect himself from permanent bitterness and sadness coming from father´s rejection.
I have no idea what Freud´s and Jung´s response would be to such a bit eccentric behaviour, but seriously taken, it´s not bad to know that the basic relationship between us and our heavenly Father or Life is always the perfect one, and the biggest surprise, it can be transmitted by someone as low and meaningless as a street begger.

Very interesting what you said about S. Freud and CG Jung. Others like Adler, formed their own association and developed a different direction.
Ernst Freud, Lucie Freud and Ilse Grubrich-Simitis has published a book where one can find a lot of personal letters and documents from S. Freud to his colleagues and friends which tells us that the man had both humor and self-irony.
His "recipe" for getting old:
" There should be a surplus of good-natured humor to withstand the changes age are doing to our body"
When his books were condemned to an official burning of the Nazis, he wrote to a friend:
" What progress we have had. During the Middle Ages they would have burned me, today they just burn my books"
My favorites are CG. Jung and Eric Fromm, but as E.F. and others say: One gets a better and expanded view if you can stand on the shoulders of another.
Spring has announced its access by flowering almond and mimosa trees. Just wonderful every year.

Marit, I stood under the almond tree in the front garden of Freud's last home in London in 2011.

In 1894, when Freud was thirty-eight, Dr. Jones reports, his best friend, Dr. Wilhelm Fleiss, informed Freud that his heart arrhythmia was due to smoking, and ordered him to stop. Freud tried to stop, or to cut down his cigar ration, but failed. "He was always a heavy smoker––– twenty cigars a day were his usual allowance," Dr. Jones writes.

Fainting also known as syncope is defined as the abrupt and transient loss of consciousness associated with loss of postural tone, typically followed by rapid recovery.

A cardiac arrhythmia can cause syncope in the same way that it causes lightheadedness (presyncope).

Sometimes a syncope is just a syncope!