Following one of my characters to Sintra 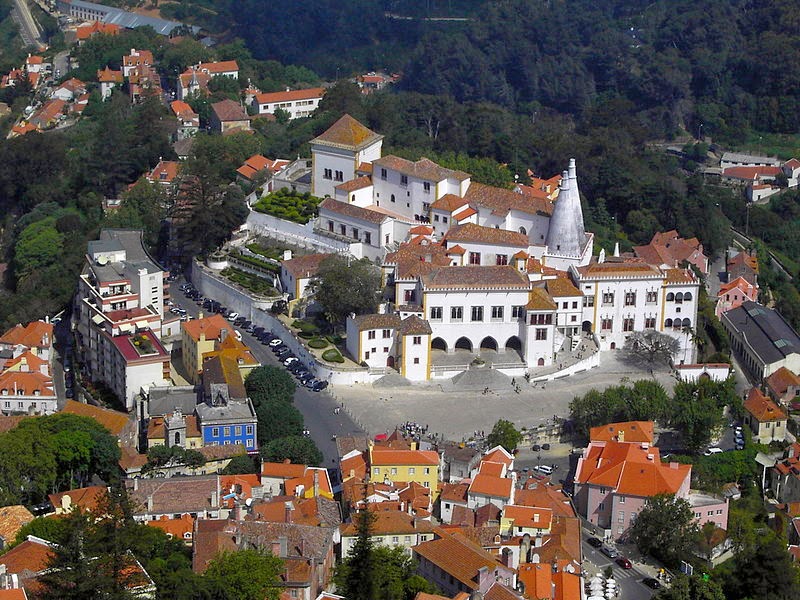 In writing fiction, you know that it's working when characters come alive and start creating their own plots. This happened with my historical novel Fire Along the Sky (published in the U.K. as The King's Irishman). Once I found the voice of my narrator Shane Hardacre, an Anglo-Irish dramatist and rakehell who is a fictional kinsman of Sir William Johnson, he ran away with the story, all the way down the Mississippi to New Orleans.
For the second, expanded edition of the novel, I interleaved correspondence between Shane and Valerie D'Arcy, a worldly-wise and deeply intuitive lover from his later life between the chapters of his narrative of a time of war and intrigue on America's eighteenth century frontier. Their love letters are filled with dreams. "Dearest Shane," Lady Valerie opens her first letter, on the first page of the second edition, "I dream you as the leopard. Last night you came to me in his skin...As I write this, I feel the places in my body you praised and fed."
I again had the experience of my characters taking over, driving things in their chosen directions. Valerie D'Arcy is very hard to resist!
More recently, I have noticed a parallel and even more intriguing phenomenon: that when a fictional character comes fully alive, he or she may have an independent existence outside the pages of a book. They may even cast something of a spell over their creators.
Last week, I found myself traveling into a possible future, maybe five years from now. To my slight surprise, I saw my possible future self seated under an orange tree on a hill in Sintra, the old royal capital of Portugal, close to Lisbon. He had a sweeping view of the towers and red tile roofs of the town, and to the sea. He was immaculately dressed in a white linen suit (not too rumpled), a very broad brimmed summer hat, and he looked fairly fit and lean. The glass beside him is porto branco (dry white port). He is writing with a fountain pen, signing books and making notes in a leather-bound journal. I don't know all the circumstances of his life but I know that he is now beloved for his stories, which are reaching children as well as adults. I rather like him!
As I sketched the scene around the orange tree, I remembered that back in the mid-1990s, when I was writing the love letters between Shane and Lady Valerie, I decided to give Shane a villa in Sintra, the old royal capital of Portugal, as his place of retirement. Was my character now drawing me to the same place?
I pulled the new edition of Fire Along the Sky off my shelves just now and found this
letter from Valerie, dated 15th January, 1805:

What does it mean, to wake from your dream and discover you are still dreaming? This happened to me last night, not once, but six or seven times. I was with you, my skin a web of nerve endings, as we lay together. You were gentle and knowing, serving my time and rhythms...
Then I realized our position was impossible. You were a young buck, not twenty years old, the hair on your face still a fine, silky down...At that moment, I awoke, knowing myself deceived by a dream. I never knew the pleasure of entertaining you between bedsheets until you had kissed good-bye to sixty summers...
Then I saw you across the room, writing at my secretary by candlelight. Scratch, scratch....I was so glad to have you with me...I flung myself on your neck, kissing and stroking.
Then I realized I was only dreaming again, with Sir Henry snoring at my elbow in the bed.
And woke in the thickest woods I ever saw. I thought I was in the oak forests of the Dordogne, on a summer jaunt, and marveled that I had dreamed myself back in bed with Henry. Then I entered a clearing and saw my mistake. A cruel warbird shot down at my head from the sky, in a blur of tawny feathers. He sank his talons into my hair...I thought I was fighting for my life. Yet I did not want to harm this bird because he was somehow connected with you.
With that thought, I woke from this fierce struggle. I found myself, to my great relief, back with you...I told you my dream of the warbird, and my feeling that there was a message here of the most urgent nature...
Then I remembered: This cannot be. You are in Sintra, dipping your sweet face in the inhalations - or exhalations - of some Portuguese maid...
Dreams within dreams, nested like those dreadful Russian matriosha dolls. I blame you for this giddying night, Shane. Will you explain to me what is happening?
Can you assure me I am not dreaming, as I write these lines?

Shane writes back, from Sintra:

I cannot help you with your question about dreaming and waking.
I have heard that the swamis of India say this life is a dream from which we wake up when we die. That would make birth the first of our false awakenings, if that makes any sense at all.

When fictional characters come alive, they not only take over the plot. Jumping outside the book, they may seek to draw their creators into their own plots. I gave a character in one of my historical novels a home in Sintra, and now it seems he is drawing me there.