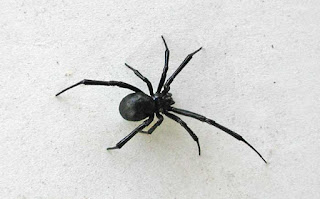 The spider in a dream might be a disease marker or an ally, a clue to the need for some cleanup or even a goddess in disguise. To know what the spider means for you, you need to track your dreams and learn to go back inside them consciously.
A woman named Jennifer shared a vivid and very specific account of how the behavior of a black spider in a series of dreams gave her disease markers she learned to take seriously. As she tells it, the sequence includes the following prodromic dreams (and follow-up events):

1."I am standing in an open doorway. A black spider leaps from the frame onto my abdomen, scaring me badly. Three months later, I developed appendicitis in the same spot and had to be rushed to hospital for an emergency appendectomy."

2. "A black spider jumps on my face. I am terrified and grossed out. Several months later, I developed a horrible and virulent skin condition that made me look about a hundred years old. After five days, hospitalized on intravenous antibiotics and anti-viral medicine, I learned I had contracted a life-threatening strep infection."

3. "A black spider leaps on my face, near my left eye--again from the door frame in former dreams. A few months later, I am driving on the freeway and a black, spider web configuration covers the entire visual field of this eye. In an urgent care intervention, the on-call eye doctor discovers that I have a torn retina in that eye, and I undergo emergency laser surgery."

This is a very instructive example of how dreams can anticipate physical symptoms. By learning to recognize personal markers, we may not only be forewarned of possible problems; we may be able to take action to avoid manifesting those problems.    The spider in Jennifer's dreams is not the spider in your dreams, or mine. While we recognize common themes when we hear each other's dreams, every dreamer's experience is personal and unique to them. For some dreamers, the spider is an ally, offering the power to re-weave the web of possibility in life. To claim that kind of power, it may be necessary to go back inside a dream and brave up to whatever is there.
I worked with one dreamer, a gifted artist, for whom the spider was at first a disease marker- warning of a possible recurrence of cancer - but then became an extraordinary ally when she found the courage to go back inside her dream and face the spider, through the dream reentry technique that is central to Active Dreaming..
The artist was terrified by a recurring dream of a jumping spider that grew bigger and bigger until it took over her studio. I urged her to go back inside the dream and volunteered to go with her. Sitting together, with our hands joined, we embarked on conscious shared dreaming with a clear intention: the dreamer would face her terror and find out what she needed to do, while I would support her as friend and bodyguard inside the dream space.       Between the energy of her fear and the familiarity of her dream space - her studio - the artist had no difficulty reentering the dream. Almost effortlessly, we found ourselves together in the dream version of her studio, facing a spider that grew rapidly to enormous size. Its multiple eyes and cheliceral fangs were not a pleasant sight at close range. The artist was shaking and sobbing, but she stayed inside the dream.      Then spider shapeshifted into Spider Woman, an indigenous American form of the Goddess. Spider Woman told the artist: "Because you found the courage to meet me, I will give you the power to re-weave the energy web of your body and the web of possibility in your life."       At that time, the dreamer was facing a biopsy. The results showed she was cancer free. She embarked on the most creative period of her personal and artistic life. Spider kept her promise, when the dreamer found the ability to brave up and reach for the power beyond the terror.       A young woman reports that when she is ill a spider climbs inside her torso and starts spinning a web. While this would be terrifying to many dreamers, and might suggest a chest infection, her dream spider is an ally who catches what is bugging her, rolls it up in a silk ball, and elegantly expels the possible complaint from her body.
By contrast, my friend Wanda has found it necessary to eject spiders she felt were adversaries - possibly embodying a threatening disease - from her dream houses in various creative ways. In one of her examples, she managed to convert a large and menacing spider into a wind-up toy that could be put out into the street, like the trash.
I've had spider dreams of both kinds. I discovered a dream report from many years ago in which I knew that I had to remove a large black spider - not a tarantula, and not furry, but about that size - from my dream kitchen. I tried to catch it in paper towels in order to carry it out without harming it, as I would probably try to do in regular life. However, the spider died as I struggled to contain it, and then promptly morphed into a set of plastic parts, like a broken child's toy, that I carried out and placed in the trash. I woke from this dream feeling a strong sense of wellness and resolution, and felt no need to interpret the dream. Moving with the energy from a dream is often more important than figuring out what the content means.
When it comes to the pursuit of meanings, let's remember that it's usually a good idea to study the nature, habits and habitats of the critters that turn up in dreams. There is a vast variety of spiders on this planet, most of them non-venomous but some incredibly deadly, so when we dream of spiders we may want to pause and attempt an identity check.
We also want to study the specific gifts of different kinds of spiders: what kind of webs they weave, for example, and the uses of those webs. The first dream catchers were spider webs. An Onondaga friend told me that when his son was very young, he hung spider webs above his sleeping head to catch and keep out bugs of both the physical and the psychic kind, in the old way. Don reminds us in a comment on my last post that spider webs are helpful in stopping bleeding.
Finally, let's remember that in the shaman's way of dreaming, we can learn to get close to fierce and dangerous creatures with which safe encounters in the physical are generally inadvisable. In my dreams of my native Australia, I am sometimes offered a funnel-web portal to enter the Dreaming of the Koori, the Aboriginal people. I remember being sternly lectured by my parents, as a small boy in Queensland, to check boots and shoes every morning in case a funnel-web spider had built inside one of them overnight, and to avoid or kill this type of highly venomous spider on sight. In the Dreaming, things work rather differently.

Really enjoyed reading this post! Excellent! Now I need to start interpreting my spider dreams. In fact, just had one a couple of days ago....Thank you so much for sharing this information..