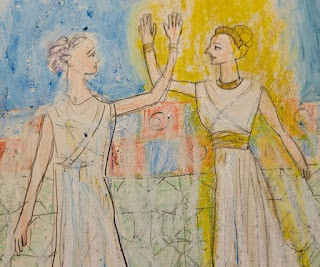 She moves across the mosaic floor in a slow ritual dance. Across the space a second figure matches her steps. I notice, without surprise, that they appear to be the same person. She is dancing with her double. Perhaps this is how she succeeds in the feats of clairvoyance and precognition for which she is famed in the city. Her name is Sosipatra. I know her story intimately.

But as I surface from the vision, in the early light, I have to look her up. It doesn't take long. Sosipatra was famed as a woman philosopher - and clairvoyant - in the 4th century, a generation before an even more famous woman philosopher, Hypatia of Alexandria. Her ancient biographer says she was initiated into the Chaldean mysteries at a very early age. Unlike Hypatia, she married and had three children. She lived in Ephesus and (after her husband's death) in Pergamon. 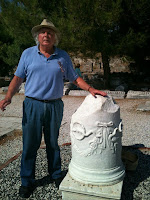 I have been to the ancient sites at both locations, and led dream journeys with shamanic drumming in the incubation chambers of the Asklepieion at Pergamon, I don't recall hearing the name of Sosipatra at that time.
- This is my raw journal report from December 16, 2022. My vision of Sosipatra came in the liminal hypnagogic zone, between sleep and awake.

I love the research assignments my dreams give me. In the weeks since my dream, I have done some detective work with the leads it gave me, consulting contemporary scholars and ancient sources. Here are my preliminary findings.

The main ancient source on Sosipatra is Eunapius’ Lives of the Philosophers and Sophists. He says she was mentored as a child by skin-clad “initiates of the Chaldean wisdom". They appeared at her father's estate when she was five. Though their wallets were "well-filled" they asked to work in the vineyards, producing such a bountiful harvest that Sosipatra's father invited them to a celebratory dinner. They were taken by the bright and beautiful little five-year-old and told her father that if he would leave her in in their care, they would produce even more miraculous results than they had generated in the vineyards. Hard to imagine a caring father agreeing to leave a little girl with strange men for years, but Sosipatra's father was awed by his visitors, deciding that they were more than human; they were daimones. He promptly left his estate. When he returned after five years, he found that his daughter, now ten, was already a philosopher in the sense that mattered to the ancients: a lover of wisdom (Sophia) who approaches the essential things - above all union with the divine - through direct experience.

The way Sosipatra deals with the man she chose as her husband on the eve of their wedding is quite as startling as her childhood training in Chaldean mysteries. She chose the philosopher Eustathius, who also came from a wealthy family and was probably significantly older. She told him that they would have three sons, and that he would die within five years. She even told him where he was going after death. It may be a sign of a truly philosophic disposition that these pronouncements did not scare him off. Her prophecies were fulfilled. One of her three sons, Antoninus, founded his own school of philosophy at the Canopic mouth of the Nile and may have known Hypatia.

Eunapius describes Sosipatra's prowess as a clairvoyant. She sees her father’s four wheeled carriage overturn as he returns to his estate after his five years of absence. When she asks her student Maximus of Tyre to ward off the love magic being aimed at her by her cousin and  admirer Philometor and Maximus returns full of hubris, she puts him in his place by describing, step by step, all the ritual actions he performed. Maximus is so awed he throws himself a her feet.

Eunapius describes another incident of remote viewing, involving the same Philometor. Sosipatra was with her students at her home in Pergamon, where she held her classes. Someone proposed that they should discuss the nature of the soul.  This parked lively discussion. Sosipatra spoke about the journey of the soul after death "and about what is punished and what is immortal".

We are made aware that this was no academic lecture. She spoke as one inspired, as a prophetess. However, "in the midst of her Corybantic frenzy and Bacchic inspiration, just as if she had altogether lost her speech she grew silent." After a pause, she cried out, "What is this? My relative Philometor rides a carriage, and the carriage has been overturned, and that man's legs are in peril. But, his servants have extricated him safe and sound , except for the wounds he has received to his elbows and knees, which in fact pose no danger. He groans away while borne on a litter."

We are told, "She said these things and they turned out to be true. Everyone knew that Sosipatra was everywhere and that she was present at everything that happened, just as the philosophers claim about the gods." [1]

So what about the divine double? The projection of the subtle body or óchima psychikón ("soul vehicle") was central to theurgy and magic in late antiquity. Enlightened beings might appear in a soma augoeides  ("luminous body") as a higher intellect coming down, or an initiate going up.

I was thrilled to find confirmation of the importance of the double in Sosipatra's life and practice. When she selected Eustathius to be her husband, she told him things that his “phantom” – his daimon or double –was telling her, such as how long he would live and where he would go after death. He would go to the realm of the Moon; she would go higher. When she started to speak of her own double, her higher self would not allow her to reveal more. "My god forbids me!"  [2]

Calling up the daimon or divine double was very much a practice of the philosophers and theurgists of late antiquity. Charles M. Stang, professor of Early Christian Thought at Harvard Divinity School, observes that "Late antiquity seems exercised by the promise of a divine counterpart, a vertical double." [3] There is Porphyry’s story of the Egyptian magician who promised to make Plotinus’s double appear at a temple of Isis. When summoned, what appeared was a deity and the magician, in terror and confusion, strangled the birds he had brought for sacrificial rites in his shaking hands. There are accounts of raising the spirits of dead philosophers – and of the double of Plato appearing as a geometric form, presumably a hologram.

There was a split among the Neoplatonists on how to account for the divine double. For Plotinus, it was an "undescended" self, as opposed to the embodied soul. When the soul comes into a physical body, Plotinus taught, it did not bring all of itself into the limits of corporeal life. A higher aspect of the self remained on a higher level - on the noetic plane - but nonetheless was not truly separate, no stranger, and could be contacted and communed with by a human who raised his consciousness to a higher level. In the section of the Enneads "On Beauty", Plotinus urges his readers, "Go back inside yourself and look." When you are able to see the divine double in its beauty with clarity, you may be able to merge with it "with nothing hindering you from becoming in this way one...wholly yourself, nothing but true light." [4]

For Iamblichus, the Syrian master of theurgy [5], the whole soul descends into the body but the higher aspect is neglected and forgotten as the ego becomes absorbed and distracted by the miasma of everyday existence. Ritual practices invoking higher powers may be required to reintroduce the alienated little self to a greater self, even though they are in the same vehicle. As I picture again the golden light in which the divine double moved in my dream of Sosipatra's dance, I reread lines from Iamblichus about the practice of photogogia, or “evoking the light.” He tells us that "this somehow illuminates the aether-like and luminous vehicle, surrounding the soul with divine light, from which vehicle the divine appearances, set in motion by the gods’ will, take possession of the imaginative power in us. [5]

I am delighted to report that there is now an elegant modern biography of Sosipatra by Heidi Marx. She deftly places the philosopher's life in its social and historical context, noting for example that while Christians of Late Antiquity did not allow women to teach men, it was not unusual for an educated “elite” women of a wealthy pagan  family to lead her own school or circle. Marx also explains that the fact that Sosipatra taught at home was typical of other philosophers including her friend and mentor Aedesius.

Heidi Marx does a wonderful job of locating Sospiatra in the  Iamblichean lineage of "ritually engaged Platonism". In this tradition reason and revelation were not regarded as antithetical but as "complementary and interpenetrating". [6] Theurgy (literally "divine working") [7] is not a flight from reason but "the  culmination and transcendence of rationality".

As Gregory Shaw puts it, in this time and place "the goal of philosophy is not conceptual knowledge but cosmogonic activity: to become divinely creative."  [8]

Heidi Marx's affection for her elusive subject is charming. She writes on her last page, "I have grown quite fond of Sosipatra in writing this account of her legendary life. She is of course a figment of Eunapius' imagination in many important respects, and so also now a figment of mine." [9] A story to dream on.

7. In an essay especially important for its discussion of dream divination in this tradition, a Greek scholar offers the following description of theurgy: "Attempting a provisional definition based on Iamblichus' understanding of the term, I would describe theurgy as the often involuntary manifestation of an inner state of sanctity deriving from a combination of goodness and knowledge in which the former element prevails."  - Polymnia Athanassiadi , “Dreams, Theurgy and Freelance Divination: The Testimony of Iamblichus”  in The Journal of Roman Studies, Vol. 83 (1993), p.116

The Double on the Balcony: Conversations with a Witness Self

Photo of RM at temple of Asklepios in Pergamon, 2012