Dreams and dynasty: Septimius Severus dreams his way to the purple 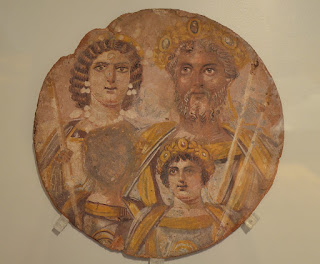 Septimius Severus made himself master of Rome in 193, after fighting and defeating several rivals in the power struggle that followed the murder of a previous emperor, Pertinax, by his own Praetorian Guard. Septimius came from the province of Africa. His father was Phoenician, his mother Italian. His first language was Punic, the language of Hannibal; under the tutelage of the great rhetorician Quintilian in Italy, he may have lost his "African" accent.
He was a lawyer, a poet, a senator and a general, who valued dreams at all stages of his rise to the imperial purple. He used dreams as sources of tactical and strategic information as well as a useful language in public discourse and propaganda, in an era when dreams were widely believed to be a nightly field of interaction between gods and humans, and between the living and the dead.
Newly installed as emperor, Septimius accepted homage from Cassius Dio, a young senator on the make, in the form of a little book describing dreams and portents. The dreams were attributed to Septimius himself, and were cited as evidence that the general was destined to become emperor. On the evening of the same summer day when he received the book, the emperor wrote Dio “many complimentary things” in a letter of appreciation.
Dio’s book contains six dreams that must have come from Septimius himself, or members of his close entourage. In one of them, the emperor-to-be is suckled by a she-wolf, like Romulus and Remus, the legendary founders of Rome. In another dream, Faustina, the wife of the revered philosopher emperor Marcus Aurelius, prepares a wedding chamber for Septimius in the Temple of Venus, near the imperial palace.
The dreams become more and more grandiose. Water streams from his hand, giving limitless refreshment to the people and nourishment to the earth. The whole Roman Empire salutes him. Someone takes him up on a high mountain. From the summit, he can see Rome and all the world. "As he gazed down on all the land and see, he lid his hands on them as one might on an instrument capable of playing all modes, and they all sang together." [Dio 74.3.1, 2.3]
The dream that most specifically announces Septimius’ rise to power is one in which a horse throws Pertinax, his murdered predecessor, in the forum. Septimius mounts the riderless horse, which acknowledges its new master. Septimius ordered the creation of an equestrian statue of himself, and had this set up in the Forum Romanum at the spot where, in the dream, he mounted the horse that threw Pertinax.
Some of these dreams may have been concocted or “improved” as propaganda in support of the new emperor. If that is the case, it speaks volumes about respect for dreams as sources of epiphany – revelation – prophecy, and divine favor. The contemporary historian Herodian, who claimed to have details from Septimius’ autobiography, said that “these things are believed to be honest and true when they turn out well.”
However, we have evidence that as emperor Septimius valued dreams as sources of intelligence. Septimius reportedly dreamed that his very powerful Praetorian Prefect, Plautianus was plotting against him, and had Plautianus put to death. He required the Senate to discuss a dream report by the nurse of one of its own members, which was also held to contain evidence of treason.
Septimius’ son Caracalla was a dedicated believer in the therapeutic power of dreams. He visited the great Temple of Asklepios at Pergamon in the winter of 214-215. Herodian reports that in the sanctuary of the god of dream healing, the emperor “had his fill of dreams” and made personal use of “the treatments of Asklepios.”
The Severan dynasty, founded by Septimius, continued to take dreams very seriously.  As in other societies where dreams are valued highly, the Severans moved towards creating a  “dream police” in the effort to limit the circulation of dream reports that could be used by rebels and dissenters. Those who invent dreams and portents on the pretext that they are doing so “on the instructions of the gods” must “by no means go unpunished”, ruled imperial jurist Domitius Ulpian.
Cassius Dio, who wrote up the dreams of Septimius, was instructed by his daimon in a dream of his own to write the history of "the wars and very great disturbances" that followed the death of Commodus and led to the emergence of the Severan dynasty.He eventually folded this into a vast history of Rome, in eighty books, written in Greek. Though much of this work has vanished, the surviving text contains a valuable account of the revolt led by the British warrior queen, Boudica. Dio's Roman History is full of dreams and portents, suggesting that these had great currency among the educated elite in his time, as well as in the centuries he covers.

Sources: The Loeb Classical Library has published a nine-volume bilingual (Greek-English) text of the surviving books of Dio's Roman History. Fergus Millar's A Study of Cassius Dio is a valiant attempt to penetrate the mind of this dream-oriented historian. The other almost-contemporaneous ancient sources are a colorful and unreliable history of the Roman Empire by Herodian of Antioch, writing in the 250s, and the no more reliable collection of imperial biographies known as the Historia Augusta, or Augustan History. The best biography of Septimius Severus is Anthony R. Birley, Septimius Severus: The African Emperor. William V. Harris provides useful leads in his full and skeptical study of Dreams and Experience in Classical Antiquity. 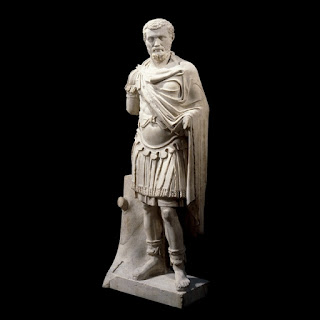 Graphic (top): the Severan tondo, depicting the emperor Septimius Severus with his family
(bottom) statue of Septimius found at Alexandria, now in the British Museum, which some think gives him an "African" look.

Thanks for sharing this story Robert. I always like to read your stories which describe how people in the past used to deal with their dreams. The meaning they found in their dreams and the stories they have dreamt. It's also very informative. I also enjoyed your book: the secret history of dreaming.