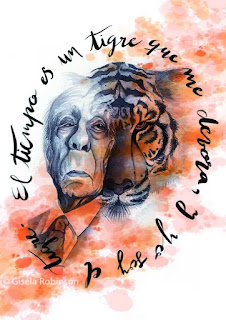 I go back again and again, to Jorge Luis Borges and his jewel-like stories, essays and poems. So many glinting facets in such elegant, miniature creations! So much effortless mastery of literature and philosophy, such love of English poetry, so many tigers.

At the start of Borges' story "Ragnarök" there is this excellent counsel for those who must deal with sleep monsters:

"The images in dreams, wrote Coleridge, figure forth the impressions that our intellect would call causes; we do not feel horror because we are haunted by a sphinx, we dream a sphinx in order to explain the horror that we feel."

He is fascinated with the theme of the double, and blames this on his love of R.L.Stevenson). A couple of his stories of the double made an especially strong impression on me because I came to them just after re-reading Gérard de Nerval’s Aurélia where – in his descent into madness – he thinks that his dark double is getting married to the woman he loves, though she is already dead.

In one Borges story (“Borges and I”), he feels empty and abandoned, while watching a second self write his stories and claim his fame. In another (“August 25, 1983”), as a man already 70, he walks from a station to a hotel at night to find he has already checked in, to room 19, a number with great significance. The clerk recognizes him with difficulty.

He goes up to the room and finds his older self, now blind and 84, staring up at the ceiling, with an empty bottle nearby. His older self tells him he has come here to die – he says to commit suicide – and tells Borges things he will do before he arrives at the same situation. When Borges denies that this is what his future holds, his older self insists that things will proceed as he says, but that when the younger Borges reaches this point, he will remember the encounter, if at all, only as a faded dream.