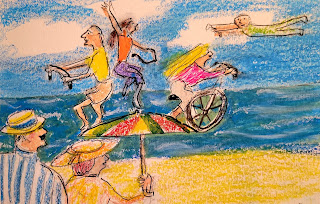 I was inspired by dream sharing today to make a quick drawing of a scene that has recurred and evolved in a series of my dreams over the years. I observe, and later help to lead, a very special flight school. After I made the sketch, I found my original dream report, dated September 22, 2008. My drawing does not do justice to all the details of the first dream in the series, but it carries the spirit of the whole.

I am walking on the beach. The colors are the wonderfully vivid hues of poster paints. The sea is French blue, with fluffy little whitecaps. The sand is oriole-yellow. There is a distinctly French Impressionist quality to the whole scene, so much so that I feel that if I turn around quickly, I might catch a glimpse of the artist who has just painted it - and maybe the scene will end at the edge of his canvas. Yet the scene is entirely alive.
I walk with a male companion, studying the scene. He is wearing a frock coat and a top hat, has a neatly trimmed black beard, and is swinging a walking stick. I notice that everyone on the beach, like my companion, is dressed in the clothes of another era. The women wear full bathing costumes, and the men wear sleeveless tops with their bathing trunks. There is something more remarkable. Nearly everyone has a cycle. More sedate couples ride bicycles - including at least one tandem bike, built of two - along the esplanade. Others are riding on the sand, or through the shallows of the water. More daring cyclists are riding in mid-air, ten feet off the ground.
While many of the bicycles are intact, some are just the vestiges. One lady sits on a padded seat, gripping handlebars and pedaling away, but below her the bike has vanished - no frame and no wheels, A beaming boy is riding high into the air, riding a bike that is invisible except for the handlebars. A dashing young man with hair like a raven's wing and an artist's silk scarf billowing from his neck is showing off, doing aerial acrobatics, on a bike that has completely vanished, while he has his fists clenched as if gripping the handlebars and his legs are cycling away.
My companion explains to me that this is a school for dream travelers. "All the bicycles you see are training bikes. As dreamers become conscious that they are dreaming and grow their understanding of what is possible here, the machines become less and less necessary. The bicycles fade and finally disappear." I follow his upward glance and see some high-flyers among cotton-wool clouds who move through the air like swimmers, or rocket-men.

December 29, 2021
Lucid dreaming from the hypnagogic state
FLYING WITH THE BAR 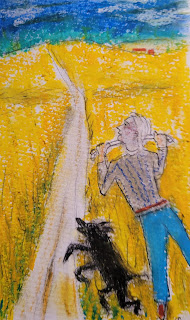 I decided to return to the scene of the flight school with trainer bikes. I didn't see the master last night but found a serviceable handlebar. I didn't need this to fly but thought it would be fun to experience what others did with a prop like this. As soon as I gripped the handles of the bar, we were off - whizzing at high speed ten or twenty feet above golden fields of grain, wind in my hair. I was delighted to see I had a companion, a long-haired black retriever pacing me on the farm road below, delighting in his run.
Posted by Robert Moss at 10:49 AM

I’ve had this bicycle dream too!