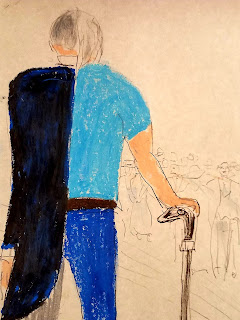 I've long been fascinated by dream experiences of parallel lives. These can take many forms. We find ourselves in the situation of a person living in a different time. We seem to be enjoying - or not enjoying - a continuous life in another reality. We slip into the perspective and apparently the bodies of other people (including even members of other species) who may be living in our present world, but are not ourselves.

The parallel life experiences that intrigue me most are those in which we seem to find ourselves traveling - in an alternate reality - along paths we abandoned in this lifetime, because of choices we made. Contemporary science speculates about the existence of (possibly infinite) parallel universes. In our dreams, we have the ability to gain first-hand experiential knowledge of this fascinating field.

In my own dreams, I quite frequently find myself living in a city or a country where I used to live, doing the things I might well be doing had I stayed in a former line of work and a certain life situation. In these dreams, I am my current age, but my life has followed a different track from the one I have taken in my waking reality. Sometimes it seems I have joined a parallel self who has been following a path I abandoned - through my life choices - twenty or even thirty years ago. There is a "just-so" feeling about these dreams. I return from them thinking, "Well, that's how things might be if I had made a different choice." Sometimes I'm quite relieved that I made the choices I did; sometimes I feel a little tristesse for something or someone left on the "ghost trail" I've seen in my dream ; but most often my feelings are entirely non-judgmental.

This theme is nicely explored in a novel titled The Post-Birthday World, by Lionel Shriver. Through alternating chapters, we follow alternate event tracks in the life of the heroine, depending on whether she did or did not kiss a man other than her partner on the night of his birthday. That night, her world split. We follow her double life, through those alternating chapters, and the dual narrative is beautifully wrought. At the end of the twin tellings, it's hard to make a value judgment between the alternate life paths. You can't really say that one is better or worse than the other; they are simply different. The movie "Sliding Doors" dramatizes a similar theme.

Through a chance encounter that was the product of a missed airline connection, I once met a woman who told me she was living a double life of this kind every night (or every day, depending on your perspective). Every night, she went home to her husband at their comfortable house on an island off the North Carolina coast. They might go to their favorite restaurant, or to the mall or the country club. In the morning, they went off on their separate ways to work. The shocker was this. The man she went to every night in her dreams was a different husband, in a different house in a different island. "Whenever I close my eyes," as she told it, "I'm in a different world. It's the same as this world, but everything is different." Under the Many-Worlds hypothesis now widely entertained by physicists, it's possible that every choice we make results in the creation of two or more new universes.

In Parallel Universes theoretical physicist Michio Kaku suggests that another universe may be floating just a millimeter away on a "brane" (membrane) parallel to our own. He explains that we can't see inside it because it exists in hyperspace, beyond the four dimensions of our everyday reality. But in fact, we can and do go there - in dreaming and in the imagination.

Second only to dreaming, imaginative fiction is our best mentor on these matters. In Matt Haig’s brilliant recent novel The Midnight Library a young woman whose body is near extinction after an overdose is allowed to experience some of the parallel lives she is living in worlds where she made different choices, and determine whether she can make a firm commitment to any of them.

In Borges' 1941 novella "The Garden of Forking Paths" a sinologist discovers a manuscript by a Chinese writer where the same tale is recounted in several ways, often contradictory. Time is conceived here as a "garden of forking paths", where things happen in parallel in infinitely branching ways. Borges conveys how all possible outcomes of a given event may take place simultaneously, each one opening a new array of possibilities.

It's fascinating to speculate on what may happen if parallel selves, and their parallel worlds, bump up against each other. Could we combine the gifts of different life experiences, or would we compete with each other? One approach to this theme is a creaky old Roger Moore movie titled "The Man Who Haunted Himself", hilarious to watch now because of its silly, jingly circa-1970 musical score. An arrogant, power-mad, womanizing s.o.b. finds enlightenment, and becomes softer and kinder to the point where his family, his office and his girlfriend can't figure him out. When his other self - the s.o.b. in the Savile Row pinstripes - turns up, everyone accepts him as the true Roger Moore character, and Mr. Softer and Kinder is shut out of his home and his office.

All the questions raised here apply to our collective world as well as our personal one. Just beside us, perhaps, is a parallel world - or a thousand of them - in which there is no pandemic and there was no insurrection at the U.S. Capitol on January 6th. And parallel worlds where there is still a Soviet Union or where (as in the Philip K. Dick novel The Man in the High Castle) the Axis won World War II and a Japanese commandant rules California. In another parallel world, we have evolved to the level of a Type III Kardashev civilization, with colonies established all over our home galaxy and the technology to tap the energy of a billion stars.

Before Earth's ecosphere ceases to support life, Michio Kaku conjectures, we may have learned how to transport ourselves to a parallel world in the multiverse. Or maybe (as some scientists believe the Big Bang came about) everything will end and begin again through the collision of parallel "branes". Forking paths, dividing - and sometimes converging. To know more, let's go dream on it.