A Gift for Resemblances 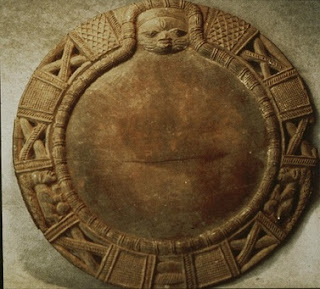 Divination is the effort to discern the divine will: to identify what supports and what opposes an individual or a community. When properly conducted and interpreted, what comes through may show the shape of things to come. Divination has never been out of style.

The oldest and most effective forms of divination are those in which you look very carefully at what the world is telling you. You have a question on your mind and you pick up a stone, or examine the bark of a tree, and see what patterns they suggest to you that may hold an answer. The women seers of the German tribes, who gave Roman commanders plenty of trouble, liked to find pictures and hear voices in running water. Plutarch wrote in his biography of Caesar:“Their holy women used to foretell the future by observing eddies in the rivers, and by finding signs in the whirling and in the noise of the water.” When the Romans themselves needed guidance on whether the divine will was favorable or unfavorable to a certain undertaking, they sent their augurs up onto the Capitoline hill to monitor the behavior of birds.

From very early times, humans have constructed divination kits to limit the answers the world can give you to manageable numbers, that can be read according to an agreed and teachable method of understanding. African diviners carry pouches containing stones and pieces of bones and other objects and artifacts that represent certain themes or outcomes. They can be cast as lots, like runes, to make a story.

The world’s great divinatory systems, such as ’s I Ching, ’s Ifa, and ’s Tarot, are more than tools for fortune-telling. In their design, the hexagrams, the odu and the cards bring together symbols representing all the forces and processes at work in the world, including those that emanate from a deeper world. The magnitude of the design is clear in the oldest text of the I Ching, from Mawangdui, where it is written that the ancient sages “drummed” the patterns of heaven and earth into the hexagrams. Such patterns give form to the ever-shifting dynamics of manifestation. The world is before you, with all of its players, marshaled in finite numbers adapted to the finite understanding of humans: the sixty-four gua of I Ching, the sixteen master odu and 256 derivative patterns of the Ifa diviner, the 78 cards of Tarot.

A reading is designed to show what forces and factors are at play in a given moment of time, and which are absent. For a devoted reader of one of these systems, what is missing from the field may be as significant as what is present. If you do a daily card reading, for example, and you find that a certain card or suit never seems to show up, you will want to ask yourself why that element or power is absent from your life. A recurring pattern of absence may be comparable to a medical test that reveals, for example, that you do not have enough iron in your body.

Great readers, using any of these systems, rely on memory, intuition and a gift for resemblances. Phenomenal memory is required to learn and carry the poetic oral recitations that hold the possible meanings of Ifa. A great babalawo (“father of the mysteries”, the title of the Ifa divination priest) may carry in his head a hundred poetic stories about each of the odu, and will scan his memory banks in a reading to see which of these, in which combinations, are relevant to his client in that moment. A great reader of I Ching will remember, as coins or yarrow sticks reveal a hexagram, not only the commentaries of past masters that he has memorized, but incidents that followed when a certain hexagram came up before. In the presence of the Hanged Man, the Queen of Cups or the Seven of Swords, a great Tarot reader may wander through a personal memory palace where each of the rooms holds a living history of each of the cards – its transformations, its consequences – and there is a great room where the cards move together and interact, as in a medieval pageant with its mystery plays.

Intuition may involve courting, or at least being receptive to, the guidance of past masters. In , for many generations, the yarrow stalks preferred for casting the I Ching were plucked from the gravesites of previous masters, including Confucius. The babalao recognizes that certain odu not only feature the ancestors or the orishas (the gods and demigods of the Yoruba) but may announce their irruption into the space. When the pattern of Ogun, the iron lord of justice and retribution, is revealed, everything comes to a stop while his praise-names are chanted. Those who work deeply with variants of Tarot based on Kabbalah or the work of Western esoteric orders may come to feel they are in contact with the intelligences of some of those who traveled before them on the roads of the Tree of Life.

In all cultures, attitudes to divination range from superstitious credulity to impatient skepticism. The most pragmatic approach may be the one the great Roman statesman and advocate attributed to his brother Quintus in a celebrated treatise in which he argues both for and against divination: eventa non causae – pay attention to “outcomes, not causes.” If it works, use it.

From time immemorial, dreams have have been the favorite source of divination, for amanteurs and professionals. The dream interpreter is never likely to lack business – even in a society that disparages dreams – because people know that their dreams are important, but need help in three important ways: to figure out the meaning of dreams, to determine appropriate action to be taken, and to disperse or ward off bad energies that may be operating during the night.

The prime requirement for a dream interpreter, according to Artemidorus, the most famous practitioner of this trade before Freud, is “a gift for resemblances.”

The meaning of dreams is often mysterious, and in many societies it has been mainatined that a professional - shrink or priest or seer - is required to interpret them.The truth is that dreams are a personal oracle that travels with us everywhere, and we don't need someone else t tell us what they mean if we are preapred to do our own work. Asked why dreasymbols can be so difficult t read, a wise ancient interpreter responded that the gods who are kindly to humanaity want us to get smart, so they set us puzzles to figure out. This was also sometimes cited as a reason why the pronouncements of the Delphic oracle were famously mysterious and ambiguous.

Text adapted from The Secret History of Dreaming by Robert Moss. Publsihed by New World Library.

'The meaning of dreams is often mysterious'

I have done incubation after incubation on a particular person, asking if I could trust them & I could not get a clear answer.

Now I've just been burnt by that individual :(

I was tempted to give up on dreamwork entirely..!!