Dream Brownies May be Authors...or Engineers 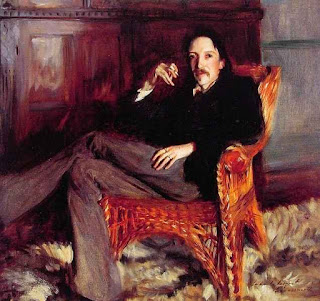 The novelist Robert Louis Stevenson (1850-1894) described dreams as occurring in "that small theater of the brain which we keep brightly lighted all night long."
Stevenson said of his now classic novel The Strange Case of Dr. Jekyll and Mr. Hyde, it was "conceived, written, re-written, re-re-written, and printed inside ten weeks" in 1886. The conception came in a dream:

"For two days I went about racking my brains for a plot of any sort; and on the second night I dreamed the scene at the window, and a scene afterward split in two, in which Hyde, pursued for some crime, took the powder and underwent the change in the presence of his pursuers."

His wife related picturesquely how one night Louis cried out horror-stricken, how she woke him up and he protested, "Why did you waken me? I was dreaming a fine bogy-tale!" She also related how he appeared the next morning excitedly exclaiming, "I have got my schilling-shocker -- I have got my schilling-shocker!"
Stevenson wrote extensively about how his passion for writing interacted with his remarkable dreams and said that, from an early age, his dreams were so vivid and moving that they were more entertaining to him personally than any literature. He learned early in his life that he could dream complete stories and that he could even go back to the same dreams on succeeding nights to give them a different ending. Later he trained himself to remember his dreams and to dream plots for his books.
Stevenson described the central role of dreaming and dreamlike states in his creative process in “A Chapter on Dreams”. During his sickly childhood, he was often oppressed by night terrors and the “night hag”.  But as he grew older, he found that his dreams often became welcome adventures, in which he would travel to far-off places or engage in costume dramas among the Jacobites.
He often read stories in his dreams, and as he developed the ambition to become a writer, it dawned on him that a clever way to get his material would be to transcribe what he was reading in his sleep. “When he lay down to prepare himself for sleep, he no longer sought amusement, but printable and profitable tales.” And his dream producers accommodated him. He noticed they became especially industrious when he was under a tight deadline. When “the bank begins to send letters” his “sleepless Brownies” work overtime, turning out marketable stories.
In his “Chapter on Dreams” (written in his house on Saranac Lake in upstate New York and published in Across the Plains) RLS gave a vivid depiction of his dream helpers.

“Who are the Little People? They are near connections of the dreamer's, beyond doubt; they share in his financial worries and have an eye to the bank-book; they share plainly in his training; they have plainly learned like him to build the scheme of a considerate story and to arrange emotion in progressive order; only I think they have more talent; and one thing is beyond doubt, they can tell him a story piece by piece, like a serial, and keep him all the while in ignorance of where they aim…
“And for the Little People, what shall I say they are but just my Brownies, God bless them! who do one-half my work for me while I am fast asleep, and in all human likelihood, do the rest for me as well, when I am wide awake and fondly suppose I do it for myself. That part which is done while I am sleeping is the Brownies' part beyond contention; but that which is done when I am up and about is by no means necessarily mine, since all goes to show the Brownies have a hand in it even then.”


He observed that  “my Brownies are somewhat fantastic, like their stories hot and hot, full of passion and the picturesque, alive with animating incident; and they have no prejudice against the supernatural.” – and have no morals at all.”

We may nod our heads over this and say, Well, there you go – that’s a writer’s imagination. Yet similar sources of inspiration are at work in the lives of innovators who might seem far removed from literature.

A case in point is one of the great financiers and railroad barons of nineteenth century , one Arthur Stilwell. He made a fortune and lost it, but his name – as in Stilwell Financial - is still associated with Janus Mutual funds and the Kansas City Southern Railroad. And with a city he founded in , , as a result of dream encounters with beings that, like Stevenson, he called Brownies. It took the city fathers of well over a century from incorporation (1898) to admit its origins. At the time of writing, the official city website contained the following statement:

The inspiration for 's founding was novel; railroad pioneer Arthur E. Stilwell, who established the town, later wrote that the ideas for his railways and the location of his namesake city came from "brownies" who spoke to him.

Stilwell himself kept quiet about these things until the end of his business career, concerned that his respectable investors would consider him a “nut” if he revealed that he was laying railroad track according to plans that were being given to him in his dreams.
In 1921, Stilwell confessed that he had been visited in his sleep throughout his heyday by guides that (like Stevenson) he called Brownies. In dreams these beings gave him the plans for his railroads, the location and layout of the city of , and the spur to embark on many other business ventures, as well as ideas for books. Stilwell wrote: “There is no doubt in my mind that these messages come from the spirit world, and that this circle of spirits that communicates with me by this rare method is comprised of engineers, poets, and authors.”
There’s that “committee of sleep” that Steinbeck invoked. In any life, we are likely to find it most lively when we are engaged in a creative task that fresh and risky, especially when that task is all but impossible. Greater challenges draw greater helpers, in and out of the dreamworlds.

The note on Arthur Stilwell is adapted from The Three "Only" Things: Tapping the Power of Dreams, Coincidence and Imagination by Robert Moss. Published by New World Library.