Ritual initiation inside the dream state: A story from India 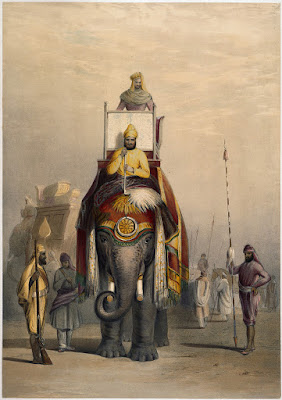 Can a ritual performed in a dream be for real? In the sacred literature of India, there is no doubt. Mind you, the ritual conducted in the dream world may involve living a whole life in another reality. The remarkable story of King Lavana, as recounted in the Yogavasistha, is an example.

In the lush country of the northern Pandavas, a king called Lavana performed a complex religious ceremony in his mind. It was the sacrifice of royal consecration, which made him a true king. What he accomplished in his imagination was entirely real. But there were consequences.
Lavana is sitting on his throne when a magician appears, bows and invites the king to watch a marvelous trick. When the magician waves his peacock-feather wand, a man enters leading a horse. The king stares at the horse, transfixed, and then begins to fall from his throne. The servants catch him, but he is completely disoriented; he does not know where he is.
When he recovers himself, he explains that he believes he mounted the horse and galloped away hunting across a great desert and into a jungle until he was pulled out of his saddle by a creeper and left swinging in a tree. He was starving by the time he was discovered by an Untouchable girl who agreed to rescue and feed him on condition that he married her and lived with her in her village.
He spent sixty years with her, and had children, and ate carrion in cremation grounds, and forgot he had ever been a king - until a terrible drought struck the land and, in desperation, he ordered his son to kill him and eat his flesh. He was about to throw himself on the pyre when a great shout restored him to his throne.
As he finishes this speech, the magician vanishes. It now becomes plain that what the fellow with the wand effected was no mere conjuring trick but a "divine illusion" designed to demonstrate the nature of reality.
Lavana sets out to revisit the landscapes of his adventure - and finds the desert and the jungle he crossed, and the tree where he hung, and the village of the Untouchables and the crone who was his mother-in-law and recalls the king who married her daughter and the drought that destroyed the rest of the family.

We eventually learn that Lavana's sufferings as an Untouchable were not only real but were arranged by Indra, to fulfill the ritual requirement that a king who performs the sacrifice of royal consecration must endure twelve years of suffering. By effecting the whole complex ceremony of the royal consecration in his mind - through an act of imagination - Lavana had accomplished instant initiation.

Wendy O'Flaherty comments on this tale from the Yogavasistha in her excellent book Dreams, Illusion and Other Realities: "To this day, many Indian sects hold that anyone who dreams that he is initiated has in fact been initiated." This has ancient precedent. In Vedic sacrifice, one priest serves as the witness. He does nothing except think the sacrifice while others make the physical motions.