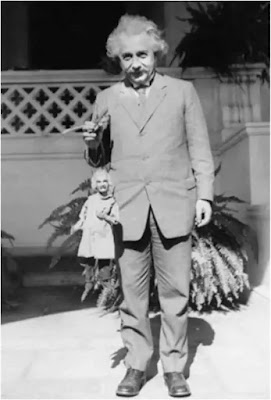 The significant problems we face cannot be solved at the same level of thinking that created them.

While leading a workshop in , I recorded the following dream:

Einstein tutors me on time travel

I enter a landscape that can be folded like a map, or crumpled so that points that would normally appear distant in time and space are next to each other. I see a beaming Einstein figure sailing across the vista. He seems to be gliding in midair, but may be traveling across the surface of an invisible screen.
Einstein wants to talk to me, and begins to speak in a thick German accent. I am amazed, delighted and skeptical. Who would a great scientist wish to communicate with a scientific ignoramus like me?
Einstein explains that there are two reasons. First, from his current vantage point he has an even greater appreciation of the value of dreams and the central role of dreaming in our future science. Second, he reminds me that he was always a dreamer, and that his greatest discoveries were the fruit of his dreaming. “Dreaming was central to my lifelong work, from my vision at sixteen of riding a beam of light.”
Einstein tells me that dreaming will help to unlock the secrets of time travel – which could, however, be a mixed blessing. He continues to insist on the physical impossibility of human travel backwards through time. On the other hand, according to “my” Einstein, it is possible to enter the past and interact with beings and situations in the past in other ways – for example, by materializing a body at an earlier time or by occupying the body and awareness of a person living in that time.
“Higher entities are capable of direct intervention in any time,” says my dream Einstein, who proceeds to tutor me on the existence and nature of five-dimensional (and higher-dimensional) beings who are not confined to the rules of the universe, even the relative universe.

This is one of a series of dreams and visions in which “Einstein” has appeared to mentor me on the structures of multidimensional reality. He gave me a very interesting working model of synchronicity described in my book Sidewalk Oracles. Some of his dream transmissions are extremely complex. I have shared some of my reports with scientist friends who can compare this material with their own explorations in string theory, particle physics and the nature of time. Sometimes we journey together, into a shared dreamscape – like the scene in which a landscape is folded like a map, or the courtyard beyond a Chinese gate where Einstein introduced me to Fu Tsi, the legendary creator of the I Ching, and explained why the I Ching is an accurate model of the universe and its patterns of manifestation.
Whether “my” Einstein is an aspect of myself, or a fantasy figure, or a holographic legacy of a great mind, or the scientist himself, making a visit from his research center on the other side, this ongoing dream series is provocative and thrilling, and gets me thinking about what dreamers and scientists have to offer each other.

In the wake of the Einstein revolution of 1905, physics became a science of uncertainty, improvisation and wonder. It revealed that behind the seemingly solid surface of things is an incredible dance of energy, or pure consciousness. It showed us that time and space, as we experience them on the way to the office or to pick up the kids from school, are not conditions for any other kind of life in the universe, merely human conveniences (although they often seem more like inconveniences).
Today, popular hypotheses in physics suggest the following:

* Time travel into the future is possible.
* Time travel into the past may be possible. (Einstein, in his time and in my dreamtime, maintains that it is not a physical possibility for a human body – but allows, in the dream version, that it could be accomplished in other ways.)
* There is no firm separation between subject and object in the universe. The observer and the “outside world” he thinks he is observing are enmeshed together. Indeed, at subatomic levels, it is the act of observation that plucks events from a soup of possibilities.
* Humans have an innate ability to communicate and influence people and objects across a distance.
* The mind is nonlocal. Consciousness acts outside the brain and outside spacetime.
* Any event that occurs in the universe is immediately available anywhere as information.
* Our experience of reality, like our experience of linear time, is a mental construct. Change the construct, and we change our world.

The new physics shows us a universe that baffles common sense, a universe that operates along utterly different lines from one in which the commuter train   leaves at 6:05 (if we’re lucky). Yet the findings of leading-edge physics have brought us scientific confirmation of the worldview of shamans, mystics and dreamers, who have always known that there is a place beyond surface reality where all things are connected, a place beyond time where all times are accessible, and that consciousness generates worlds
How do we bring all of this together with our lived experience, our human needs, and our hopes for world peace and a gentle upward evolution of our species?
Through dreaming.
Dreaming, we swim in the quantum soup of possibilities, where the act of looking brings things into being. Dreaming, we discover the existence of alternate realities and parallel worlds – including dimensions that escape human conceptions of form – and can actively explore them.
Dreaming, we confirm that consciousness is never confined to the body and that we can reach people and objects at a distance. Dreaming, we are time jumpers, able to visit (and possibly influence) both past and future. Dreaming, we can experience the six (or seven) “hidden” dimensions of physical reality, separated from our everyday sensory perception at the time of the Big Bang, that are posited by string theory.
As dreamers, we can achieve experiential understanding of the multidimensional universe that science is modeling.
As active dreamers and researchers inside multidimensional reality, we can contribute in important ways to what will be – if we are lucky – the foremost contribution of the twenty-first century to science and evolution: the emergence of a true science of consciousness.

Part of this text is adapted from Dreaming True by Robert Moss. Published by Pocket Books.

As always, you are in the best kind of company.:)
Thank you so much for this post.
I appreciate all the levels of information in it!