Psychorrhagy, or the Origin of Ghosts and Doppelgangers 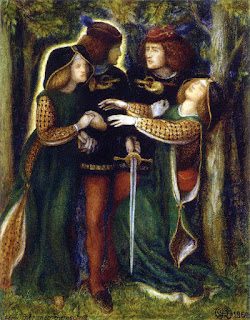 Text adapted from The Dreamer’s Book of the Dead by Robert Moss. Published by Destiny Books.

Art: Dante Gabriel Rossetti, "How They Met Themseves" (1864 watercolor version)
Posted by Robert Moss at 4:24 AM