Under the Wings of Pegasus 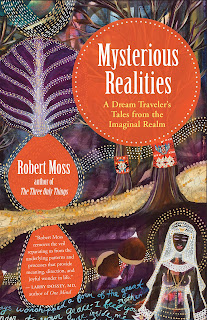 Synchronicity guided the publication of my new book, Mysterious Realities. Being open and available to the play of signs and symbols around us - and ready to act in the special moments when the universe gets personal - not only brings a champagne fizz of magic into everyday life but delivers practical results.
At the close of one of my workshops in Berkeley – in which synchronicity was a major theme – I walked with my coordinator to a restaurant. I talked about three things along the way. The first was Pegasus, the winged horse, born from the blood of nightmare, capable of opening the springs of the Muses – the surge of creative inspiration – under his stamping hooves. Second, I spoke of how I had many folders of “almost complete stories” that probably wanted to be put in the hands of the right publisher. I had given the collection a title long ago, "Mysterious Realities". They were essentially just-so stories, tales from my adventures as a dreamer in many worlds. I remarked that a theme in many of these tales is that we may be living more than one life right now.
“While I am walking with you to dinner,” I said to Jane by way of example, “there is another Robert who is not going out to dinner, and another who never started leading dream workshops, and another who never moved to the United States, and who knows how many Roberts who died before now.”
I started talking about the Many Worlds theory in physics, which holds that we are living in one of numberless parallel universe that can interact with each other. I stopped in mid-sentence when I saw a winged horse, white and magnificent, on the other side of the street. It was on the sign of a used bookstore, Pegasus Books.
“Excuse me,” I said to Jane, “I just have to run in there.” 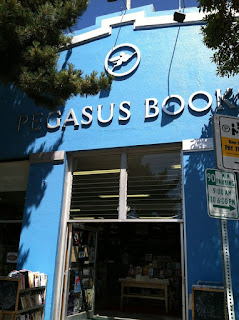 I darted across the street, dodging cars. Fortunately Berkeley drivers are generally kind to pedestrians.
From the threshold of Pegasus Books, at eye level, I saw my surname in upper case letters on the spine of a book. MOSS. The title of the book was Almost Complete Poems. I assumed the author was Howard Moss but no, it was Stanley Moss. His poetry, previously unknown to me, was of some interest but it was his title that seized me. I had been talking about almost complete stories and here was an author with my surname who had actually published a collection of almost complete poems.
I looked at the book next to Almost Complete Poems. The title was I Must Be Living Twice. 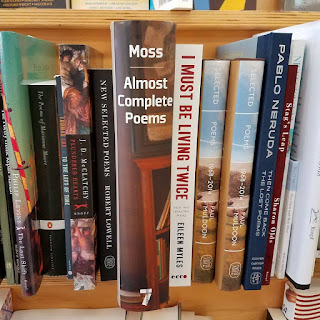 Pegasus, almost complete literary productions, living parallel lives. Three times makes the charm. I sensed laughter behind the curtain of the world, as if those who make these things come together were snickering, “Do you think he gets it? Is three times enough?”
The dinner was mediocre, but it was the story on the way to dinner that counted. I had a lunch date the next day with my favorite editor, Georgia Hughes, who had published, most recently, my book Sidewalk Oracles, which is all about playing with signs and synchronicity in everyday life. I had a fresh story on this theme, and I was eager to share it with her.
Synchronicity had brought Georgia and me together a decade before, and the friendship we developed had turned me, for the first time in my life, into a constant author, producing book after book on dreaming and imagination which Georgia received with great warmth and edited with great professional insight. She is highly intuitive, and may well have picked up the fact that the creator inside me was pushing for me to deliver something different from my previous books in several genres.
We met at an Italian restaurant in Walnut Creek, exchanged hugs, and ordered wine. Before the wine was delivered – and before I had a chance to tell my tale of Pegasus and the almost complete stories – Georgia looked me in the eye and said, “You know what book of yours I’d like to publish next? A collection of your stories, all these amazing adventures in travel that you have in this world and the worlds where you go in your dreams.”
“That’s exactly what I want to do next.”
I told her about my bookstore experience.
By the time our wine arrived, we had reached an agreement. We clinked glasses to celebrate the future publication of Mysterious Realities, with a nod to the shelf elves who were surely at play in that bookstore, under the wings of Pegasus.
-
Mysterious Realities: A Dream Traveler's Tales from the Imaginal Realm
Posted by Robert Moss at 7:58 AM

You're right about the champagne fizz effect, Robert.
This has me giggling with enthusiasm to pull out those
unfinished works from the back of the 'works in progress file'!

(Lately the 'Lady and the Unicorn" tapestry has been popping up
around me and yesterday I came across the novel by Tracey Chevalier of
the same title!! Hmmmmm.)

Thanks for the Magic! My intuition fork is 'humming' to synchronicity!
And I notice the shelf elves has Moss beside Neruda & Lowell.
Very fine company, indeed.