Dreaming with the Fast-Flowing Goddess 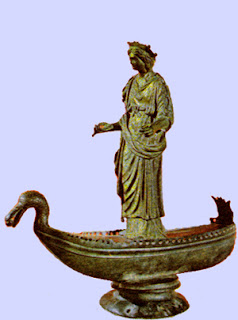 At the shrine of Sequana, at the source of the River Seine in the Dijon area of France, ancient Celts came to seek healing dreams in the sacred night. Cloaked pilgrims journeyed with their offerings, which included models of the organs that needed healing, carved from oak or stone. They bathed in the sacred spring, prayed to the goddess, and placed their offerings beside a sacred pool. They entered a long portico or dormitory, hoping that in the night - during sleep or in the twilight state between sleeping and waking that the ancients knew is especially propitious for contact with the more-than-human - the goddess Sequana or her emissary would appear to them.
No magical power, other than simple cleansing, was attributed to the spring itself, but the waters were regarded as a source of creative flow, and as a portal to the Otherworld and its powers.
We know the name Sequana from nine inscriptions found in the area. It has been suggested that it means "The Fast-Flowing One". Sequana is the goddess of the River Seine, which flows through Paris, and (according to Strabo) was the patron of the Sequanae, a Gaulish tribe in this region. Her special companion animal is the duck, and in a statue now in the Musée archéologique  de Dijon, a crowned Sequana is depicted riding in a duck-headed boat.
Only the foundations of the healing shrine of Sequana at her spring, the Fontes Sequanae, survive, but we can glean a great deal about the ancient practice of dream incubation for healing from the contents of two pottery vessels discovered at the site. One contains more than a hundred  carved effigies of eyes, breasts, limbs, heads and internal organs. A second vessel contained more than 800 similar carvings. Pilgrims who needed healing for the parts represented ascended a series of terraces, pausing perhaps to drink from streams and cisterns containing the sacred waters, before reaching the main sanctuary and being admitted to the place of sacred sleep. Grateful travelers paid for inscriptions at the site thanking Sequana for gifts of healing, evidence that we have here a Celtic parallel to the practice of Asklepian dream healing in the ancient Mediterranean.
What happened to this great precinct of dream healing in the realm of the Goddess when the Church arrived? One guess. The site was appropriated by the Church and re-dedicated to an invented male saint, St Sequanus.
In reviving the memory of the "Fast-Flowing" Goddess, as we do in my Celtic-themed workshops and gatherings, we step towards cultural soul recovery - and remember a healing practice that can transform our lives.

Image: statue of Sequana in a duck-headed boat in the Musée archéologique  de Dijon.
Posted by Robert Moss at 8:20 AM

Thank you for this Robert! Stirring her memory brings water flow to my eyes. Recently walking through Audubon Park here in New Orleans, I come across a fallen duck on the ground in need of proper burial. I feel strongly to release her to the water and thank the goddess for her spirit soaring again within creation. Now I know/remember who to thank for this guidance! Great Goddess Mother Sequana. Of note, I am Lakota and we've a beautiful song to the grandmothers sung before most every ceremony. Our elders tell us to imagine Grandmother Unci Maca traveling along rivers waters, standing in a canoe while sing and drum. Your story adds even greater depth. Aho mitakuyaosin! (All My Relations)

Thank you for this beautiful comment, Peta, and for giving us the wonderful, inspiriting image of Unci Maca singing as she rides the rivers. This would be very familiar to Sequana's people. We are all related, indeed.